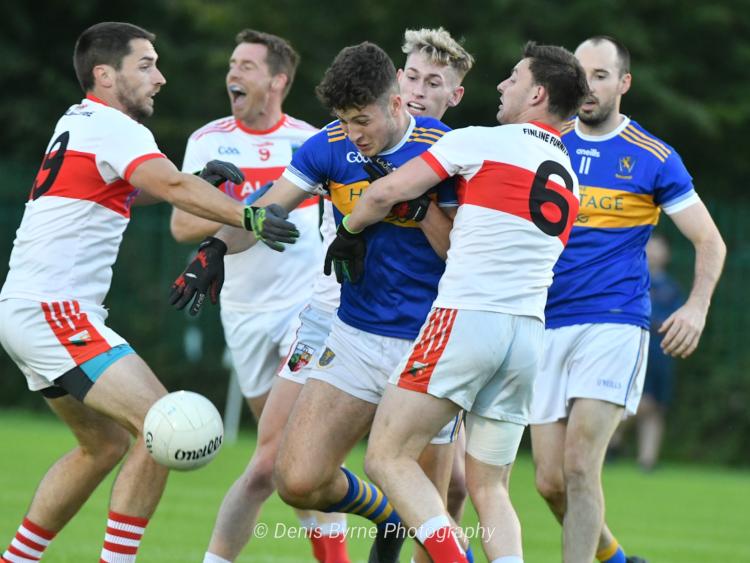 Emo caused yet another upset in the Laois senior football championship on Thursday night as they defeated O’Dempsey’s in the round two winners section to become the first team to move on to the quarter finals.

Having defeated last year’s finalists Killeshin in the opening round, they had the bit between their teeth again as they toppled O’Dempsey’s.

It was an extremely physical encounter with frees well earned on both sides. Played at the LOETB centre of excellence, momentum shifted throughout the game and coming near the end it looked like it would be O’Dempsey’s who would move on to the quarter finals as they led by two points with seven minutes to go.

However, Emo went on to kick the final four points of the game, three of which from U20 star Jack Owens as jubilant scenes erupted in at the back of O’Moore Park at the sounding of Des Cooney’s full time whistle.

O’Dempsey’s will look back on the game and realise that they wasted a lot of chances. Emo were wasteful at times too and should have had a few more goals but when O’Dempsey’s were on top in the opening half, they failed to make it pay on the scoreboard.

They will have a second crack of it when they take on one of the winners from the qualifier section in round three but they are in last chance saloon now.

It was O’Dempsey’s who got off to a flying start when Matthew Finlay crashed the ball to the net with the first attack of the game.

Points were exchanged but Emo were up for the battle and the energetic Padraig Kirwan burst up from wing back to fire in their opening goal of the game on nine minutes to put them 1-2 to 1-1 in front.

They were keeping their noses in front but Conor Meredith was starting to have a big influence on the game for the O’Dempsey’s men.

Emo got the perfect tonic to that as they rattled in their second goal on 17 minutes. Patrick Hosey did well in the build up to feed Jack Owens and as Owens shot for goal, the last touch seemed to come of Hosey and into the net as they now led 2-3 to 1-2.

Kirwan should have had his second goal just after the water break but he blazed wide.

Conor Meredith and Darren Strong exchanged points but three in a row from the O’Dempsey’s men left it only a two point game coming up to half time as Emo led 2-5 to 1-6.

Eight minutes of first half injury time was enough time for Matthew Finlay to kick over another free as the minimum separated them at the break.

Emo got the opening score of the second half through Padraig Kirwan to put them two up but two points from Matthew Finlay levelled things at 1-9 to 2-6 on 36 minutes.

Two minutes later and O’Dempsey’s looked to have got a game defining score when Micheal Finlay got their second goal to put them three points up.

Instead of lying down, Emo rose to the challenge and as O’Dempsey’s had Fionn Holland sent to the sin bin for 10 minutes on a black card, Emo got it back to a one point game with Paul Lawlor nailing a couple of frees.

Tom Behan put two between them again with seven minutes of normal time to go but Emo went on to kick the last four scores in that time plus the seven minutes injury time.

Darren Strong got things going with a point that was borderline on being wide or a point before Jack Owens levelled the game in the 59th minute with a free.

Now with their tails up, Emo smelled blood and sure enough Owens produced the goods with two more scores, one from play and one from a free to send them into the quarter finals.