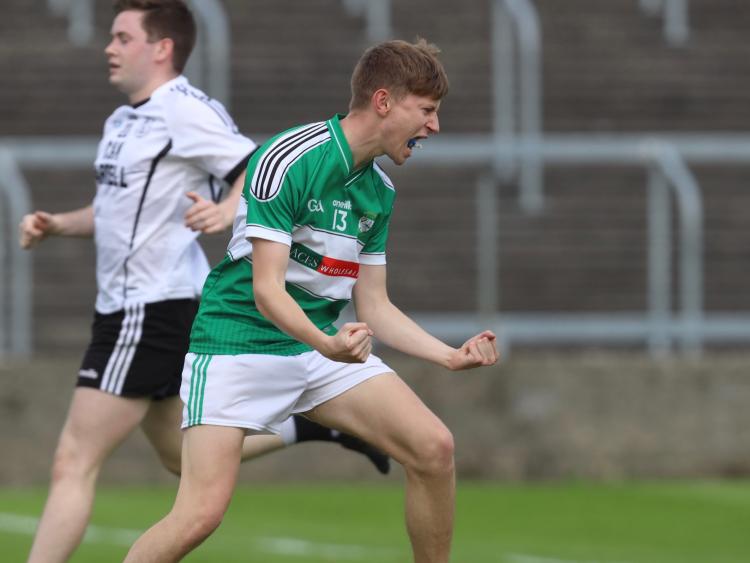 Sean Moore celebrates scoring a goal for Ballyfin against Arles-Killeen in the Laois SFC Round 3 last year.

The second round of action in the Laois football championships is set to get underway this Thursday and runs right the way through to Sunday with some fascinating ties in both the Senior and Intermediate grades.

Emo have already booked their place in the quarter final with a stirring win over neighbours O'Dempsey's on Thursday (click link to read) but there is still plenty of action to look forward too.

Both of these teams accounted for the Arles clubs in round one and did so in fine style.

Ross Hennessy and Lee Timmons were in excellent form for Graiguecullen while they looked a polished outfit all over the field.

The Heath will be buoyed by getting a win in their opening round having staved off relegation last year and they also had their main men up front stepping up to the plate as Conor Booth and Daithi Carroll kicked 1-7 between them.

On paper, this is the tie of the round and a game that neither side will need much motivating for. Neither were at their brilliant best in their opening round wins but at the same time, had the composure and class to get the job done in tough encounters.

Paul Cahillane went off injured early for Portlaoise and they will be hoping that he can make it back to full fitness for this crunch clash.

Ronan Coffey kicked five second half points for Port against Stradbally but for large periods of that game, Stradbally had them on the racks.

The prospect of this clash is sure to sharpen the minds of both sets of players and the stakes are massive.

Ballyroan haven't played in since the beginning of August as their game against St Joseph's just about got played before the local lockdown scuppered the other seven games in round one.

Ballyfin have had a teak tough battle with Rosenallis under their belt now and that will have to stand to them.

Ballyroan have been progressing extremely well at underage level and the manner of their last minute win over St Joseph's will help gel the side together.

One more loss for either of these and it will be a relegation nightmare they will find themselves in. Both were unlucky not to win their openers, St Joseph's in particular but they can ill afford to dwell on that.

Both defences will fancy holding the opposite forward but something will have to give.

Ballylinan put it up to Portlaoise in the opening round but lacked that firepower to really mount a live scoring challenge. Gary Walsh was well marshalled but they did give a very honest account of themselves.

Rosenallis will be buoyed by their big win in the hurling and with John O'Loughlin back in their ranks, they have big presence around the middle third.

What a clash this promises to be. The parish battle will see one of them confined to a relegation semi final and the other will re-ignite their championship hopes.

Both were disappointing in round one with Killeen only scoring six points against Graiguecullen while Kilcruise managed 10 against The Heath.

The Kingston brothers were well marshalled by Graiguecullen while Ross Munnelly and David Conway proved age is only a number as they kicked seven points between them for Kilcruise.

This one could go either way.

The final game of the senior championship this weekend sees Killeshin and Courtwood looking to resurrect their championship hopes.

Killeshin are down key players due to emigration, most notably Stephen Attride while Courtwood were well shocked by O'Demspey's putting seven goals past them in Round one.

Emo were dominant winners over Killeshin and both clubs have it all to do to avoid a relegation semi final.

With plenty of scoring talent on each time and the stakes high, this is a potential cracker.

Like the senior championship, the Intermediate football round two fixtures have pitted fascinating battles with no shortage of attractive games.

Two teams that showed well in round one and their clash in Mountmellick has the potential to be an excellent game of football.

Scoring power won't be a worry for either side while there is some exciting young talent on both sides.

Portlaoise will be up against it against Evan O'Carroll and crew. The Portlaoise men got the better of O'Dempsey's only last Monday night in their re-arranged fixture but they will come up against a different level of opponent on Sunday.

The championship favourites started out with a good win over Timahoe with O'Carroll to the fore and kicking scores for fun. There is nothing guaranteed but if both clubs play to potential, Crettyard will win.

The big question with teams in the qualifiers section is how have they dealt with their opening round loss and have they managed to refocus the minds and make the most of their preparation time.

Mountmellick will go in as favourites but Annanough are well capable of producing a performance and advancing.

The weather put pay to O'Dempsey's and Portlaoise playing their first round game last week meaning that O'Dempsey'swill only have a few days to prepare for Sunday's all or nothing game with Timahoe.

Timahoe were well beaten by Crettyard in the opening round and look to be struggling for confidence and form but sometimes a win is all it takes to turn things around and drive a team on.

Relegation worries come into play for the loser while the winner can get their year back on track.