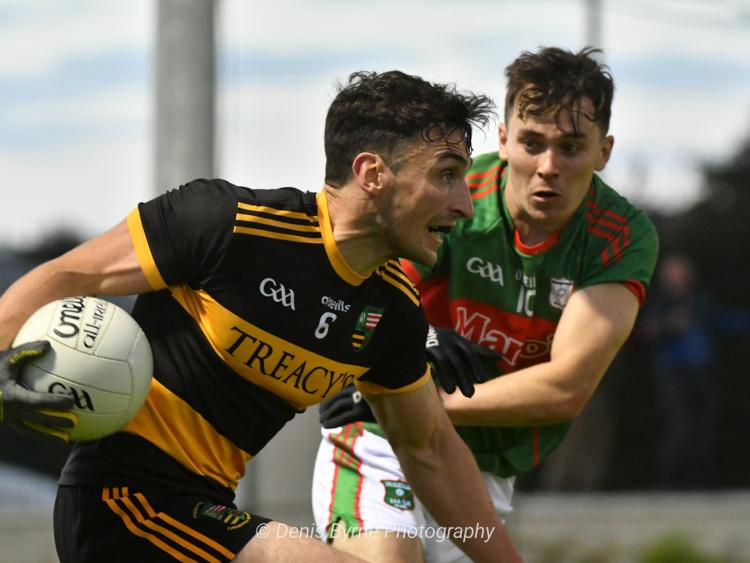 Action from Graiguecullen and The Heath. Photo: Denis Byrne

A steely performance from 14-man Graigeucullen saw them through to the quarter-finals of the Laois SFC at the expense of The Heath on Friday night.

Trailing by a point heading into the final quarter and then losing Chris Hurley to a second yellow left the outlook a bit bleak for Graigue, but they knuckled down and scored four points on the trot while holding The Heath scoreless to grind out the win.

They deserved the win on the balance of play, having been ahead for most of the first half and using the ball that bit cleverer in the closing stages also.

The first half had been disappointing for the most part, with Graigecullen taking an early lead through Brian Byrne and The Heath levelled thanks to James Phelan. They were the only scores in the opening 18 minutes, as neither team seemed capable of imposing themselves on the game.

Ross Hennessy finally ended the drought with a good score off his left, and Brian Byrne then added his second.

The Heath were finding it hard to create chances at the other end, but two Chris Bergin frees kept them in the hunt. Lee Timmons and Danny Alsybury hit back for Graigue and they were 0-5 to 0-3 ahead at the break.

The early stages of the second half belonged to The Heath as they played some fine football over the next 15 minutes. Jimmy Nerney got them up and running before Robbie Dowling rounded off a good move to level the scores.

Robbie Ging and Chris Hurley traded scores before PJ Daly and James Phelan put The Heath two ahead by the water break in the second half.

The Heath were on the crest of a wave now but they couldn’t keep it going as Graiguecullen wrestled back control of the game. Danny Bolger got them going with a free, and then Chris Hurley was shown a second yellow in the 51st minute to see Graiguecullen reduced to fourteen men.

They never missed a beat though as Lee Timmons drew them level and then three more unanswered points from Bolger and Ross Hennessy frees and a Ross Alcock effort from close range wrapped up the win.