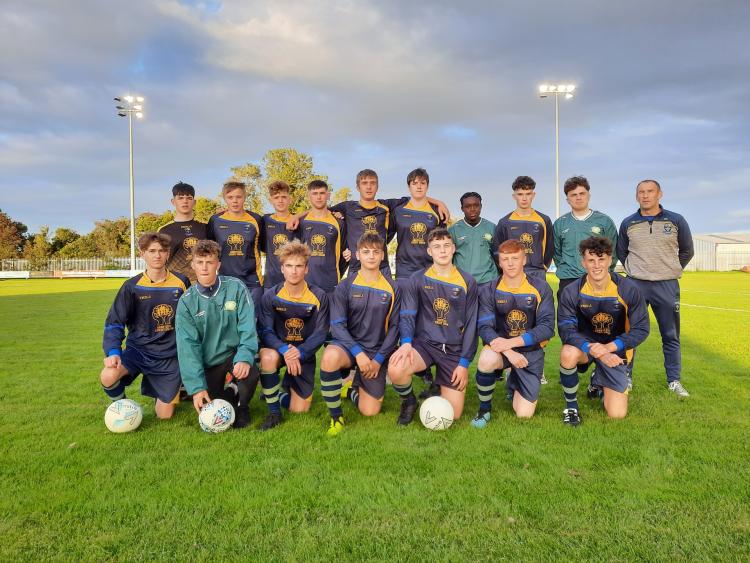 The Abbeyleix squad that were defeated in the cup final on Friday night. Photo: Brian Lowry

There was to be no glory for Abbeyleix AFC on Friday night in Tullamore as Willow Park proved too strong for the Laois side IN the Under 19 CCFL cup final.

Played in ideal conditions in Leah Victoria Park, the Abbeyleix men were playing second fiddle right from the off and while they did stick to their task and never threw in the towel, it was Willow Park who always looked the likely winners.

Willow had a couple of half chances early on but Ruaidhri Neavyn was proving a tough nut to crack in the Abbeyleix goals. Despite conceding four over the course of the 90 minutes, Neavyn was excellent throughout and made a string of fine saves in the 90 minutes.

One such save came in the ninth minute when he saved from point blank range but from the resulting corner, Willow Park took the lead.

They doubled their lead on 15 minutes before Jamie Strafford had a good effort saved by the Willow Park keeper and out for a corner.

There was to be more misery for the Abbeyleix men before the break and on 24 minutes Willow Park made it 3-0.

Abbeyleix were still looking for a way back into the game and had shots from Robert Corkish and Finn Roll saved.

Ruaidhri Neavyn was called into action again at the other end and again just before the break as Willow led 3-0 at the break.

Strafford had another effort saved early on in the second half but following a scramble in the box, Willow Park grabbed their fourth goal to put the result beyond doubt on 56 minutes.

Neavyn kept his focus and made a few more saves while a consolation goal did arrive through Adam Broady but it wasn't there night as they end up been defeated 4-1 in the cup final after a season that brought many challenges with Covid-19.