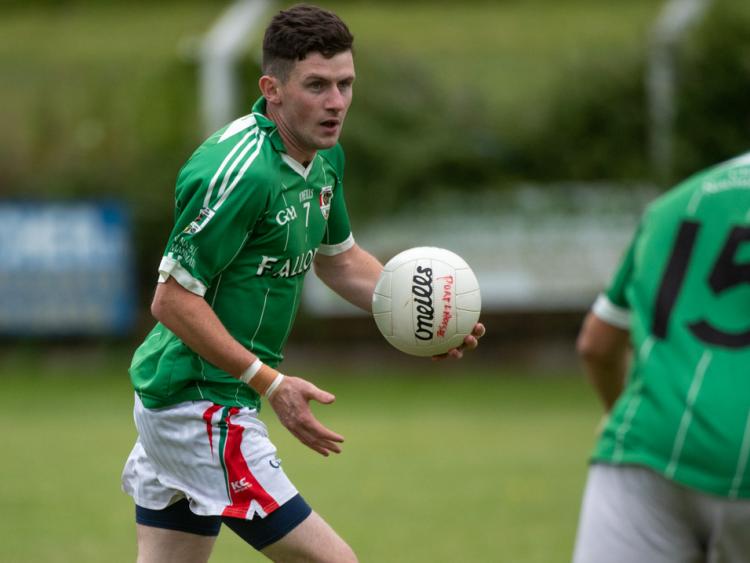 Clonaslee got the better of The Rock on Saturday night.

Despite going into this one with the odds heavily stacked against them, The Rock put in a massive shift to keep last year’s Intermediate finalists, Clonaslee St Manmans, at bay for 55 minutes.

However, Clonaslee St Manmans have proven that they refuse to give up on more than one occasion. In the first round, they looked down and out when they were trailing by five points to Mountmellick, only to snatch a late goal to force extra-time, where they would come out on top.

This time around, there looked to be no way past a resilient and disciplined The Rock defence, only for Niall Corbet to crash in a late goal to spur Clonaslee St Manmans to victory.

There were goal chances on both ends of the field after those early scores. Clonaslee St Manmans Ryan Kilroe’s attempt went just wide of the left hand post, while Aaron Dowling of The Rock was denied by the post.

The Rock struggled to hit the target in the opening stages, and this allowed Clonaslee St Manmans to go three up thanks to another Corbet score. This time it was from play, as Corbet curled a sublime strike between the posts.

Despite the early dominance on the scoreboard, The Rock were well in the contest, and they began to find their feet in front of goal. Stephen McDonald sold his man a dummy before firing one over the bar with the outside of his boot, and he did practically the same thing a minute later for The Rock’s second point.

Aaron Dowling pointed a free, and the teams were level heading into the first water break. The Rock continued to show more hunger after the break, winning all the breaking balls in midfield, as well as maintaining an organised defence.

This allowed The Rock to take the advantage before half-time, as McDonald and Dowling (free) points put them 0-5 to 0-3 ahead in a surprising turn of events in Mountmellick.

The Rock kept the momentum after the interval, as McDonald again pointed under pressure, and then pacey wing-back Victor Oladapo made a strong run before raising another white flag from a tight angle.

Corbet replied with two frees for Clonaslee St Manmans before the second water break, as his side still trailed by two points.

The Rock defended well throughout, but their downfall was that they couldn’t keep hold of the ball in the second-half. McDonald managed to grab a score on the counter-attack for them, but Clonaslee St Manmans sucker-punched them in the last few minutes.

The ball was patiently worked up to the hands of Corbet, who’s rocket of a shot found the bottom right corner to level proceedings. The Rock were on the ropes now, and Corbet showed his class by converting the final two frees to give Clonaslee St Manmans a narrow win.