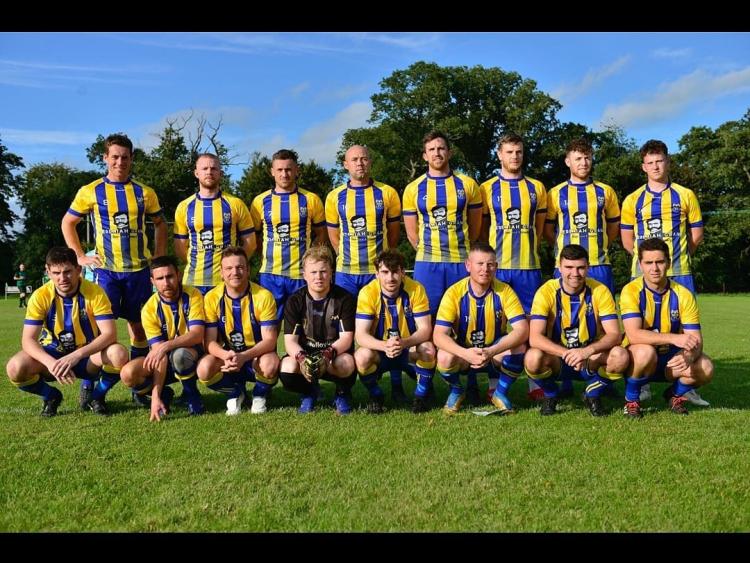 Mountmellick were unlucky not to advance to the cup final

Birr Town showed no signs of complacency on Sunday morning when they defeated a brave and gallant Mountmellick side 2-1 in the Counties Combined Cup semi final to book their place in the final.

Birr, fresh from winning the Senior Division title last Wednesday will now face Towerhill Rovers in the cup final who overcame Templevilla 2-0 in the other semi-final.

Mountmellick started the better and were the better side for the majority of the first half, with both teams struggling to create any clear chances in the first 10 minutes.

13 minutes in, Mountmellick nearly went ahead through Shane Dowling.

A long ball found Dowling who rounded Conor Hogan in the Birr goals but could not convert from a very tight angle as Birr’s Keith McEvoy cleared off the line.

Mountmellick looked the most likely of the two to open the score and nearly did so in the in 30th minute.
Eddie Melia’s shot was blocked but fell to Shane Dowling forcing Hogan into making a smart save.
The rebound fell to Gary Donoher who went down in the box. However, he was judged to have dived and was subsequently booked despite a strong penalty shout.

With half time approaching, Mountmellick were battling hard to break down the Birr defence but failed to do so in the opening 45 minutes.
The second half started much brighter than the first and Birr seemed to settle into the game although they found themselves behind on the 64th minute.

They failed to clear a corner kick as the ball bounced from head to head before it fell to Darren Strong in the box who drilled the ball into the net from a half-volley.

However, Mountmellick only held the lead for four minutes. Charlie Healy picked out substitute Steve Hanrahan on the right-hand side. Hanrahan’s cross was met beautifully by Nathan Williams who gave Conor Comiskey no chance of saving. Seven minutes later and Birr were in front.

Nicky Molloy was brought down in the box and despite strong protests from the Mountmellick men, the referee pointed to the spot.

Molloy coolly converted the penalty to put Birr 2-1 ahead with 16 minutes left to play. Mountmellick desperately went on the hunt for an equaliser and centre back John Watchhorne pushed forward to try and find one.

They could well have had an equaliser when Eddie Melia found himself free at the back post but his header soared over the bar. Although Mountmellick had a couple of late corners, Birr held out to progress to the cup final.