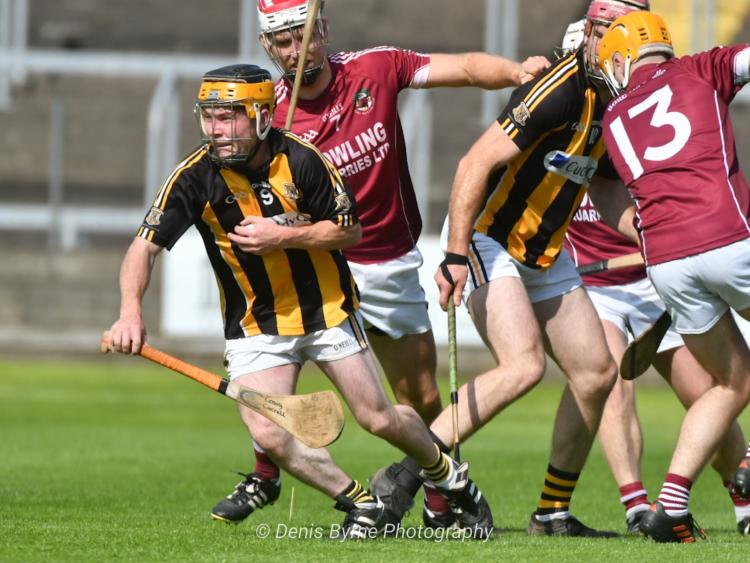 Craig Carroll on the march for Camross

Camross will be a senior outfit in 2021 as they recorded their first win of the championship earlier today to avoid a relegation play off. Ballinakill put up a strong resistance but Camross were the better side on the day as their year finishes without a knockout appearance but also without the worry of a relegation play off.

That burden will fall on the shoulders of Ballinakill who with one point to their name in Group B, will take on Castletown in the relegation play off in two weeks time.

While the game certainly didn’t lack intensity in the opening half, neither side could find their radar. Cha Dwyer did open the scoring for the Ballinakill men but Camross were proving wasteful.

Mark Dowling did draw them level but they had half a dozen decent chances to expand their lead only for their wide tally to begin to mount up.

Gearoid Burke fired over from distance and Zane Keenan did add a free but they only led 0-3 to 0-1 at the water break having hurled with the strong wind blowing down to the town end of O’Moore Park.

Camross sharpened up after the water intake despite Ballinakill drawing it level with points from Seamus Fitzpatrick and Cha Dwyer.

Level at 0-3 each on 21 minutes, Camross raced into a 0-6 to 0-3 lead with Andrew Mortimer, Craig Carroll and Eoin Gaughan all finding their range.

Injury then forced Ballinakill full forward Gearoid Lynch off the field and although Eamon Jackman did slap over a free, Camross were about the pull away.

Zane Keenan and Oisin Bennett fired over points before Joe Phelan intercepted Ballinakill coming out of defence, fed Mark Dowling and Dowling smashed to the net to maintain his record of scoring a goal in every championship game so far this year.

Leading 1-8 to 0-5 in first half injury time, Dwayne Palmer kept their assault on the scoreboard going and while Eamon Jackman did land to stoppage time frees, it was Camross who went in sitting pretty – 1-10 to 0-6 at half time.

The second half improved quality wise and Ballinakill came back into the game with the opening two points, both from Cha Dwyer.

Camross fired over a brace before Paul Simms made an excellent save from Oisin Bennett only for Zane Keenan to convert the ‘65’.

At 1-12 to 0-8, Camross looked like they might pull away but Ballinakill were up for the fight and they dug in.

Dean Delaney entered the game and proved his worth with a point to stretch the Camross lead to five with 10 minutes left.

Ballinakill were not done yet however and they came with an almighty burst in the final stages.

Three in a row from Cha and Seamus Dwyer along with a free from Jackman left it 1-14 to 0-15 with six minutes to play.

Zane Keenan settled Camross back down with a free but another Jackman free and a superb score from Cian O’Shaughnessy left just the minimum between the sides with normal time just up.

As injury time played out, they couldn’t muster that next vital score and a late goal from Dean Delaney sealed a vital win for Camross to maintain their senior status.