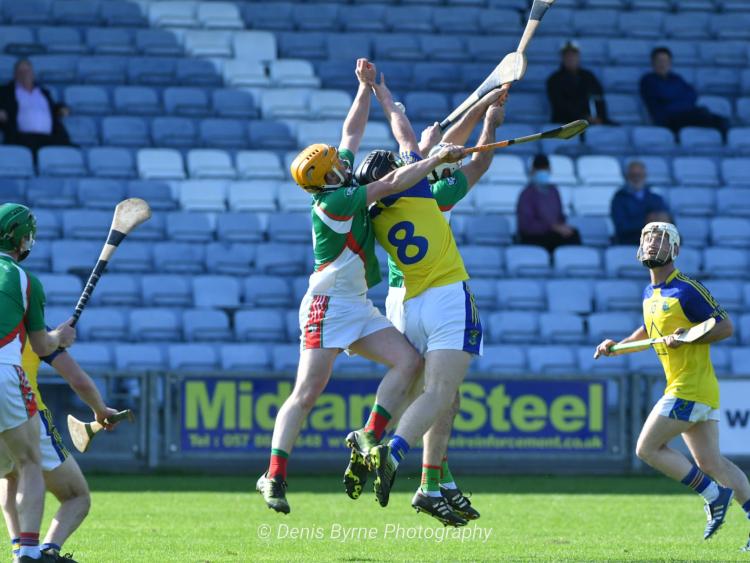 Action from Rathdowney-Errill and Abbeyleix

Rathdowney-Errill are back into the Laois senior hurling semi finals after they cruised past Abbeyleix by 14 points on Sunday afternoon.

Through as group winners, they will now play Borris-Kilcotton in the semi final but a big shadow hung over them at full time as star man Mark Kavanagh picked up a serious looking arm injury in second half injury time.

Kavanagh had to be helped from the field and the optics didn’t look good and looks a major doubt for their semi final in two weeks time.

Kavanagh fired 1-15 over the 60 minutes with his goal three minutes after the restart a real touch of class.

The first half began at break neck speed as the scores flowed right throughout the half. Abbeyleix opened up a 0-2 to 0-0 lead inside the opening minute with Ciaran Carroll and Ciaran Byrne opening their accounts.

Rathdowney-Errill answered back with two of their own from that deadly combination of Ross King and Mark Kavanagh but Abbeyleix were giving as good as they got as they looked to upset the champions.

Eoghan Fennelly was in his stride from frees and from play but at the other end, King and Kavanagh were also to the fore and slapping over some lovely scores.

They were level 0-5 each after 10 minutes but Rathdowney-Errill began to slowly pull away at this stage.

They stood 0-7 each at the water break but you sensed Rathdowney-Errill were about the cut loose.

Jack Kelly got the second of his three first half points while Mark Kavanagh also added one from a free as they stood 0-10 to 0-8 after 20 minutes.

That became 0-12 to 0-8 with Kelly and Kavanagh firing over again before Paddy McCane fed Ross King and the Laois star buried low past County colleague Enda Rowland to make it 1-12 to 0-8 after 26 minutes.

In fact, the last 10 minutes of the opening half saw the reigning champions’ puck 1-9 in reply to Abbeyleix notching just two points.

Mark Kavanagh (three) and two super long range efforts from Paddy McCane deep in injury time sent them in leading 1-17 to 0-9 at half time.

Abbeyleix came back hard and but the damage was done in the final 10 minutes of the first half.

The second half was just 20 seconds old when Brandon McGinley blazed over a goal chance but their second goal wasn’t long about coming. Just three minutes in and Mark Kavanagh produced a sublime piece of skill to weave his way through and blast a shot to the top corner of Enda Rowland’s net.

Abbeyleix responded well with the next three scores from frees, two from Rowland and one from Eoghan Fennelly but man of the match Mark Kavanagh responded in kind with two more points, one of which an excellent sideline cut.

Abbeyleix couldn’t find a way through for a goal or two that they desperately needed and while the fizz was gone out of the Rathdowney-Errill mens’ play, Kavanagh was still adding to their tally as he landed three more frees.

Enda Rowland and Eoghan Fennelly were doing their best to keep the margin down but there was only so much they could do.

As the game petered to a close, Mark Kavanagh received that arm injury and looked in some pain leaving the field but his replacement Darren King made his mark by firing over the last point of the day as they won out by 14 points.