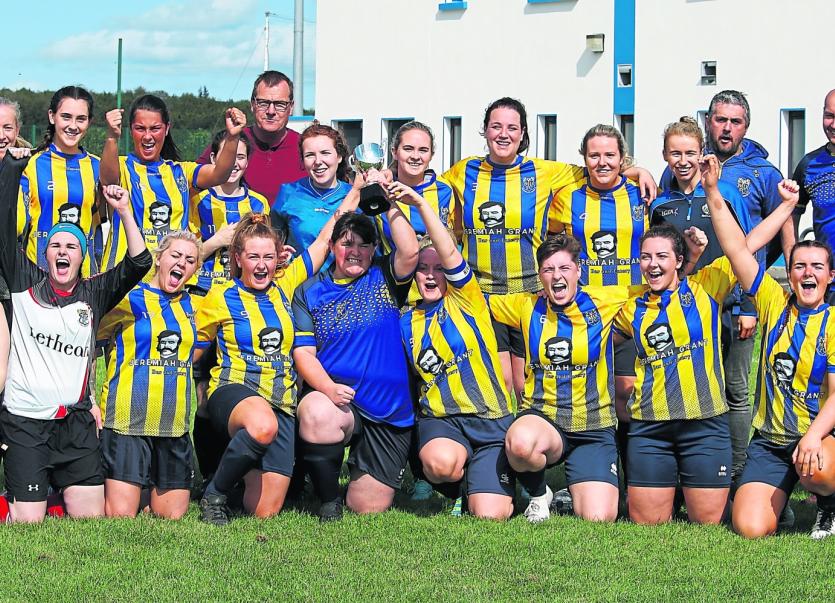 Mountmellick are CCFL women’s shield champions following a 1-0 victory against a fancied Birr Town side. Mountmellick came into the game as underdogs. A disappointing league campaign was put aside for the game and the girls put in a fine battling performance for the full 90 minutes to ensure they brought the silverware back to Mountmellick.

Birr Town settled into the game from the start and seemed to be allowed a lot of time on the ball. Ciara Murtagh almost opened the scoring for the Offaly side after her strike sailed past Jenny Parkinson in the Mountmellick goals, but the linesman flagged for offside and it was subsequently disallowed.

The disallowed goal was an alarm clock for Mountmellick as they woke up, composed themselves and began to string a few passes together. Striker Meghan Dunne was causing real problems for the Birr defence from her pace and she almost got the opener.

Her shot from inside the box forced Samara Hanlon into making a smart save. Just three minutes later, she had another chance to put the underdogs 1-0 up.

A long ball from Chloe Carroll found Dunne again, but she was unable to find a way past Hanlon in the Birr goals.
The impressive Niamh Conroy also had an effort saved when her shot from outside the box was adequately dealt with by the Birr goalkeeper.

For the rest of the first half, Mountmellick were much the better side as they pushed for a goal. With Meghan Dunne and Laura Peake causing serious problems, it looked only a matter of time before one of them found the net. However, the Birr defence coped with the pressure and the teams went in level at the half time break, 0-0.

Mountmellick started the brighter of the two in the second half once again. However, they were struggling to break down the Birr defence, particularly Amy Leonard who cleared an endless amount of ball throughout the day for Birr.

There were no clear-cut chances in the second half as both teams struggled to break down each other’s defence. Chloe Carroll’s 61st minute header, which glanced over the bar proved to be the first decent chance for either team, as the game headed into the final 20 minutes.

With the game looking certain to be heading to extra time, it was Chloe Carroll who had other ideas.
With just five minutes remaining, Birr won a free 30 yards out, on the left-hand side of the field.

Carroll stood over it, and instead of launching the ball in, she unleashed an unstoppable rocket into the top corner from the free kick, giving Samara Hanlon in the goals no chance of saving.

Despite Birr unloading some fresh legs off the bench to try and find an equaliser n the dying minutes, they were unable and Mountmellick held out for a famous victory.