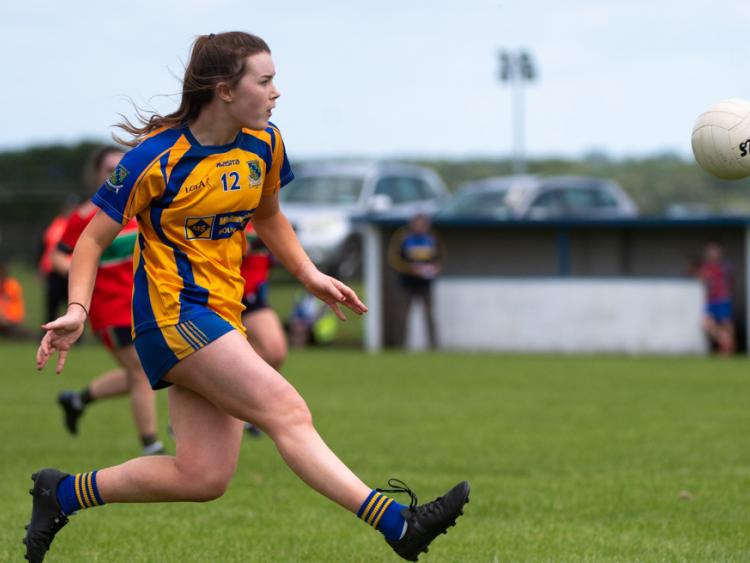 Grainne Lalor in action for Sarsfields during their win over Timahoe in the opening round.

Sarsfields and Portlaoise will battle it out for the Laois Senior football championship title this weekend and it’s a match up we have all seen before but under much difference circumstances. The sides are no strangers to each other having met in many county finals over the years but Sarsfields always had the edge – namely, Tracey Lawlor.

Given the circumstances this year, the championship format was changed. All teams met each other in the group stages and the top four teams contested the semi-final.

St Paul’s opted out of the championship after two games which meant points difference could not be used following walk overs. This forced St Brigid's and Timahoe to face a thrilling play off which saw St Brigid's advance to meet Portlaoise in the semi-final while Sarsfields met St Conleth's.

This year has seen a difference in Portlaoise who are going into the final with a clean sweep in the championship.
They remain unbeaten after overcoming St Brigid's in the semi-final and will be quietly confident with a two point win over Sarsfields under their belt from earlier in the championship.

Sarsfields have a good record this season despite their loss to Portlaoise in the group stage. They received a walk over from St Brigid's but won the rest of their games.

They will be eager to redeem themselves after their last encounter with Portlaoise and will feel they have a lot to prove to keep their dreams of eight in-a-row titles alive.

They were put under pressure by St Conleths in their semi-final but this game will stand to them at the weekend.
Portlaoise’s Shaunagh Jackson will be a huge a threat as she was the top scorer in the Town’s semi final with 2-6 under her belt.

Sarsfields will be hoping to get tabs on Sarah Ann Fitzgerald early on as well as Fiona Dooley who has a strong goal scoring record this season and Aisling Kehoe who has a big presence in the forward line.

Sarsfields won’t be easy to break down and the hero of their semi final was goalkeeper, Becky Williams, who pulled off multiple saves to help her side book their final spot.

Portlaoise will be looking to get a handle on Laura Marie Maher, but that is not an easy task. Clare Conlon was the Mountmellick side’s top scorer against St Conleths with four points, one from play and three frees.

Joyce Dunne has also been impressive throughout the season as well as Mags McEvoy. From looking back at both sides’ championship campaigns it is clear they are ready to step up to the challenge.

This is the perfect match for an entertaining county final and both teams will be confident in their ability to claim the crown.
Portlaoise and Sarsfields will battle it out for the title this Saturday, September 26 at 12:30pm in O’Moore Park and it is sure to be a cracking game.