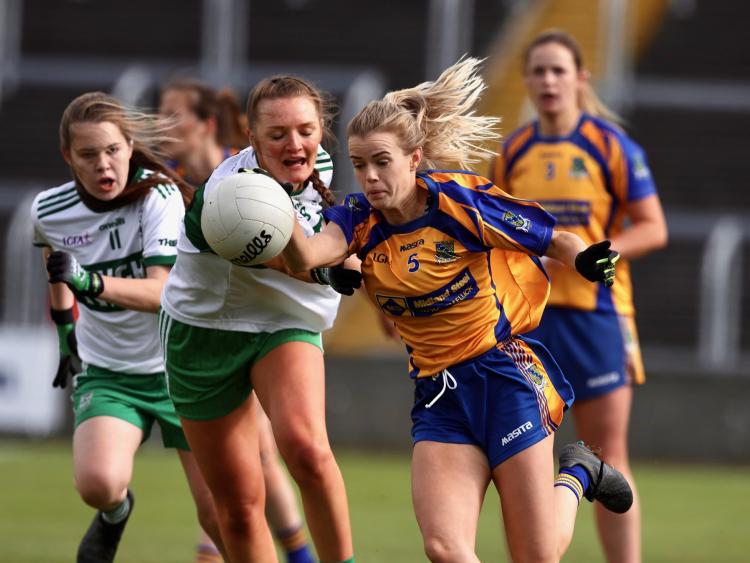 Portlaoise stopped Sarsfields from their eight-in-a-row county championship title and it was the incredibly entertaining final we had all hoped for.

It’s the match up that held high expectations and it delivered just that. Both sides were quietly confident and it was a familiar pairing for a county final but with a different dynamic than Portlaoise have had before as it was the first final they faced Sarsfields without the threat of Tracey Lawlor.

Sarsfields have had a strong championship campaign having lost just one game in the group stages to Portlaoise but going into today’s game, anyone could have taken the title.

Both teams took a few minutes to settle with a couple of unforced errors to their name. Portlaoise were first off the mark with a point from Aisling Kehoe in the fifth minute but Sarsfields answered back with a point off the boot of Mags McEvoy less than a minute later.

The Portlaoise full back line, in particular Claire Dunne, turned over three of Sarsfields attacks in the opening minutes and played a similar game to the Mountmellick side’s captain, Rachel Williams in defence. Both very impressive for their sides in the opening ten minutes.

Portlaoise went ahead again in the eighth minute after Alison Taylor popped over a rebound. The following six minutes welcomed no scores from either side but great attacking football was played and it was both sides full back lines that stepped up to the challenge to put on a display of turnovers.

Clare Conlon spilt the posts with a free in the 16th minute just before the first water break of the game. The game resumed with a Portlaoise point brilliantly finished by midfielder Fiona Dooley and not long after, Sarah Anna Fitzgerald followed suit.

The second quarter of the game belonged to Portlaoise. Fiona Dooley was the architect behind a 22nd minute goal hit by Aisling Kehoe and The Town looked to be in control. Sarsfields looked a little nervous in the build up to half time and were unlucky to miss a couple of opportunities.

Their 27th minute attack would end their 12 minute dry scoring streak after Lorna O’Sullivan hit the target with a superb point off her right boot. Laura Marie Maher followed up with another score just before half time.

A Sarsfields opportunuty fell into Portlaoise goalkeeper, Aoife Hyland Conlon’s hands in what seemed to be the last attack of the first half but referee Brendan Hickey played another 30 seconds which resulted in Lorna O’Sullivan pointing for her side to leave the half time score at 1-04 to 0-5.

It was anyone’s game heading into the second half. Sarsfields were rearing to go and it was Laura Marie Maher her got her side up and running with the first score of the second half. Ellen Healy cancelled that out a minute later and Leah Loughman followed up with a free to put Portlaoise three points clear after 35 minutes.

Master free taker Clare Conlon stepped up and converted a free for Sarsfields but Portlaoise kicked on with points from Aisling Kehoe, Shaunagh Jackson and a Loughman free. The next number of attacks came from Sarsfields who were unlucky to kick three wides in a row, which would later prove to be detrimental.

Conlon kicked off the fourth quarter if the game with another free, her fourth of the game having being held scoreless from play by Ciara Byrne.

With nine minutes to spare, Sarsfields threatened to attack goal time after time but that would not materialize.

Leah Loughman and Joyce Dunne traded scores and there was just a two point difference with three minutes left to play. Portlaoise looked dangerous on their 58th minute attack but Aisling Bohan turned over the ball and suddenly Sarsfields became the threat. Within seconds, a free to Portlaoise was called and every supporter in O’Moore Park was on the edge of their seats.

Normal time was up when Aisling Kehoe put Portlaoise three points clear but Sarsfields still had another chance. Leah Tarpey converted a point but it was cancelled out by a Jackson point. Three points in it and three minutes injury time played. Just as it looked as though Sarsfields would have one last chance, the final whistle was blown and Portlaoise claimed the title after a hugely entertaining game.