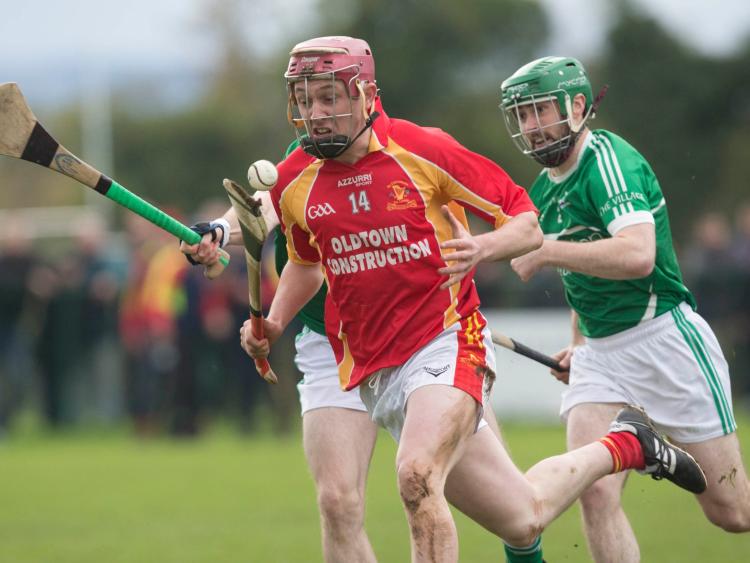 Eoin Clancy on the attack for The Harps

The Harps are through to the Laois Shopping Centre Premier IHC final after they proved too strong for Slieve Bloom in O’Moore Park.

A trio of injuries to Pauric Dunne, Eoin Clancy and Ciaran Burke were the only negatives in a routine win for Fintan Deegan’s side, a their bid to return to the senior ranks in Laois will now be put to the test against Portlaoise in the decider in two weeks’ time.

Slieve Bloom raced out of the traps, as Ben Conroy won possession from the throw in and broke forward at pace before drilling the ball between posts with barely five seconds on the clock.

The Harps response was pedestrian by comparison, as we had to wait nearly twenty seconds for that, as John Brophy drilled over from close range.

That lit the touchpaper for a frenetic opening quarter to the game, as The Harps soon took the lead thanks to a Michael Lanigan free. Ciaran Burke then doubled it before Lanigan put the finishing touches to a wonderful passing move down the left, as The Harps went three ahead.

Ciaran Conroy hit back for Slieve Bloom with a point from 55 yards out, but it was soon cancelled out by another from Lanigan, from a free. That left it 0-5 to 0-2 at the water break, and things soon got worse for Slieve Bloom.

When play resumed The Harps put together another nice passing move, this time inside the 21 yard line, and it ended with Eoin Clancy drilling a shot to the bottom corner.

Slieve Bloom looked to Ben Conroy to lead the fightback, as he tapped over a couple of frees and he set up Ross Holmes for another from play, but any time they hit the target The Harps responded. Daniel and Ciaran Comerford both raised white flags, with Lanigan also getting in on the act, and at half time they were 1-10 to 0-5 ahead.

That lead went from eight to ten early in the second half thanks to Michael Lanigan and Ciaran Comerford, with Ciaran Conroy hitting back for an increasingly forlorn looking Slieve Bloom side.

Ben Conroy almost got in for a goal in the 42nd minute to give his side a much-needed boost, but his shot flashed across the face of goal. He did hit two more frees before the water break though, and at that juncture The Harps were 1-13 to 0-8 in front.

Ben Conroy’s sixth point of the game followed the resumption of play as Slieve Bloom were now within seven and the hope of victory lingered on, but The Harps soon put paid to that.

Shane Fitzpatrick knocked over a nice point and Philip Russell chipped in with his first of the day, before Ciaran Comerford got a third on the trot as The Harps went ten ahead.

It was plain sailing from there to the end, as Lanigan added a sideline cut to set up a date with Portlaoise in the final.