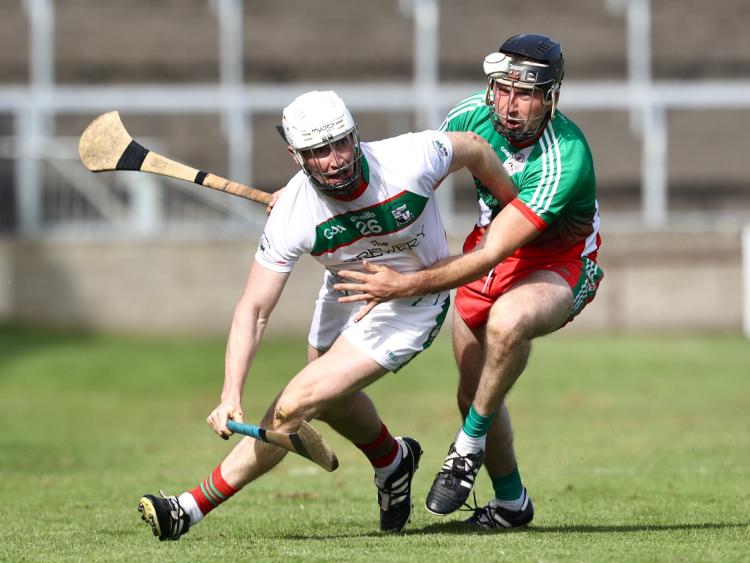 Borris-Kilcotton are through to the Laois SHC final after they proved too good for Rathdowney-Errill in O’Moore Park on Sunday afternoon.

Expectations were high about what these two teams could serve up, and they certainly didn’t disappoint in the opening stages. Borris-Kilcotton took an early lead with a point from Neil Foyle after ten seconds, but Rathdowney-Errill hit back with interest.

Thirty seconds after Foyle’s effort, good work from Ross King released Brandon McGinley through on goal and he rifled an unstoppable shot to the roof of Eoin Fleming’s net.

PJ Scully replied for Borris-Kilcotton with a sideline cut as those in attendance were treated to some top class hurling in the opening minutes, with Ross King pointing a free in reply for Rathdowney-Errill.

Scully then hit a free from his own 65 yard line, and Aaron Dunphy twisted away from Eric Killeen to point from 45 to level the scores.

King edged Rathdowney-Errill back in front from another free, but Borris-Kilcotton would retake the lead before the water break. Scully hit another free to restore parity and then Emmett Jones pointed from the left wing to see his side 0-6 to 1-2 up as the teams paused to refuel.

The scores remained close for the rest of the half, but Borris-Kilcotton did manage to build up a tentative lead, thanks to a run of three unanswered points between the 27th and 29th minutes, which saw them go three clear.

Ross King and Joe Fitzpatrick broke that brief run of scores, but Scully and Patrick Whelan ensured Borris-Kilcotton were still three up at half-time, 0-14 to 1-8.

The second half started in ideal fashion for Borris-Kilcotton, as PJ Scully powered a shot to the net from just inside the 21 with barely 30 seconds on the clock. Three points soon followed and they had raced into a nine point lead before Rathdowney-Errill had time to register what was happening.

The game was quickly getting away from them, but to their credit they managed to dig their heels in. Ross King broke the Borris-Kilcotton run with a free, and Thep Fitzpatrick added another moments later. Paddy Purcell, now freed from his role in defence to push forward, then hit two superb points from either wing to get them within five, as the momentum shifted towards them.

A missed chance to narrow the gap further, when Ross King’s free from 21 yards was saved on the line, allowed Borris-Kilcotton to turn the tide back in their favour.

PJ Scully put them six clear after the water break and they never looked like being caught after that. Rathdowney Errill did mange to hit three on the trot to give themselves a late glimmer of hope, but Stephen Dunphy’s brilliant goal in the 59th minute put the seal on the win.

The celebrations could begin in earnest for Borris-Kilcotton, as they are now one game away from claiming a second Laois SHC title.