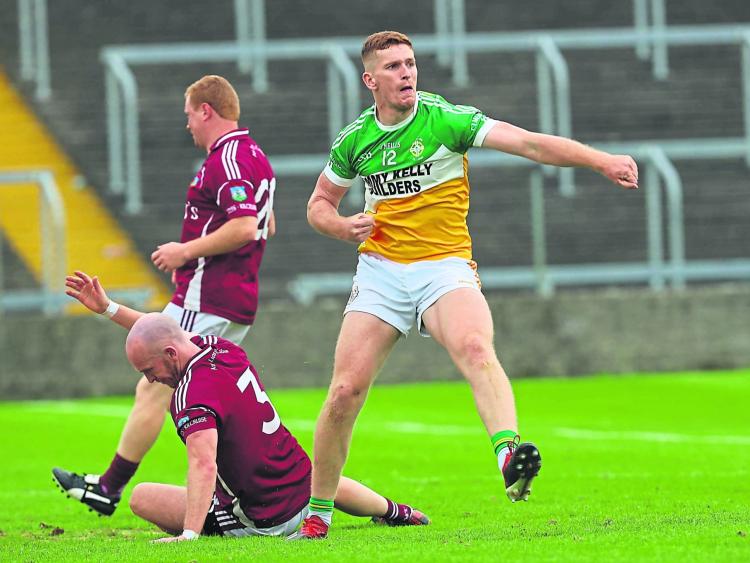 Evan O'Carroll has been in top form again for Crettyard

Crettyard made the drop from the Senior Championship, as a relegation final defeat to the Heath condemned them to the Intermediate ranks. After reaching a maiden Senior semi-final in 2016, Crettyard just couldn’t sustain that level and steadily fell back into the pack year after year.

However, their Intermediate Championship journey this season appears to have lifted the spirit of the club entirely. They went in as the favourites, and so far, they have deserved that tag with three exceptional performances.

Crettyard were drawn to play Timahoe in the opening round of the competition, and they had no problems getting by that challenge. They won handsomely on a scoreline of 3-15 to 0-12, with their main man Evan O’Carroll giving the Timahoe defence a torrid time, as he accumulated 2-10.

In round two, Portlaoise put up a better fight for half an hour and kept it competitive. Crettyard led 0-8 to 0-7 at the break, but they exploded into life in the second-half and battered their opposition 6-12 to 1-11 in a sensational attacking display.

Although O’Carroll helped himself to 1-6, it was the performance of Cormac Murphy in the middle of the park that was particularly special, as he fired 3-2.

Mountmellick were supposed to provide a sterner test in the semi-finals, but once again, Crettyard made light of the challenge. While O’Carroll was clinical up top once more, finishing with 2-10 to his name, it was the performance of Ciaran Burke at midfield that really caught the eye.

Burke played for The Harps in the Intermediate semi-final only a day before, and even picked up a nasty injury in the process. Even despite the bandaged leg, the teenager Burke delivered a brilliant display down the middle to help his side to the Intermediate final with a 3-14 to 0-9 victory over Mountmellick.

Clonaslee, who lost out to rivals Rosenallis in the Intermediate decider last season, have had a slightly more rocky path this year. Both Mountmellick and The Rock almost caught them by surprise in the first few rounds, but Clonaslee survived. Their main man, Niall Corbet, was crucial on both days, as his pinpoint frees came in handy towards the end of those games.

When Clonaslee took on The Rock in the semi-finals for the second time, they had no problems. Clonaslee took their game up a couple of gears and ruthlessly dispatched The Rock on a scoreline of 5-11 to 1-7, with full-forward James McRedmond helping himself to a hat-trick.

This final between Crettyard and Clonaslee has the potential to be a thriller. Crettyard will go in as slight favourites thanks to O’Carroll’s unstoppable form. Clonaslee will need to consider doubling up on O’Carroll, as no defender in Laois will be able to stop his pace and power at this level.

Clonaslee can cause Crettyard plenty of problems though. Any indiscipline on Crettyard’s part is guaranteed to be punished by the free-taking expertise of Clonaslee’s Niall Corbet, while the likes of Robert Downey and James McRedmond up front will also cause the Crettyard defence issues with their pace and direct running.

The midfield battle between Clonaslee’s Sean Condon and Will Young and Crettyard’s Ciaran Burke and Cormac Murphy could be the decisive factor in this one though. Either way, a cracker is expected in O’Moore Park this Saturday at 5pm.