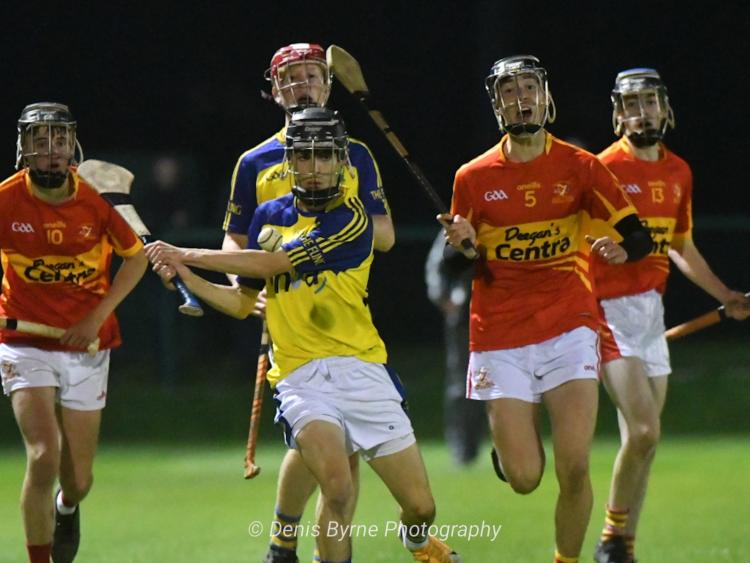 The scoring rate may have been low enough over the course of the 80 odd minutes but the entertainment value and spirit shown by both Abbeyleix and The Harps was off the charts in the Centre of Excellence on Friday night as Abbeyleix eventually got over the line and claimed the Minor 'A' hurling title after extra time.

It was the Abbeyleix men who had to force the extra time with a late leveller in normal time but they clinched the game in the first period of extra time firing 1-3 without reply to storm ahead.

It was heart breaking for The Harps. They contributed to a game that was full of passion, heart and determination with no shortage of skill on show either. The hooking, blocking and all round willingness to put their bodies on the line was a testament to both clubs but there can only be one winner and that accolade went to the Abbeyleix men.

The Harps were first out of the blocks with Cody Comerford landing a free inside the opening minute but Abbeyleix, who were playing against a stiff breeze were about to get motoring themselves.

Semi final hero Colin Byrne landed a free before points from Sam Quinn and Liam Kavanagh left them 0-3 to 0-1 ahead by the 10th minute.

The action was fast and hard hitting and The Harps had plenty of answers of their own with Cathal Murphy and Comerford both landing placed balls to square up the match again midway through the half.

Abbeyleix stole a march again coming up to half time with three points on the spin from Liam Kavanagh (two) and Colin Byrne as they led 0-6 to 0-3 with just a minute of normal time remaining in the half.

Crucially, The Harps found some late momentum and left the gap at just the minimum by the half time whistle as late scores from Cathal Murphy, a super effort from out on the sideline, and a neat point from Jim O'Connor left them trailing 0-6 to 0-5.

The second half, while full of endeavour, saw scores hard to come by. Cody Comerford levelled the game on 34 minutes with a free but 11 minutes passed before another score arrived, this time courtesy of a Cathal Murphy '65' to give The Harps the lead.

With eight minutes to go, Abbeyleix drew level with Colin Byrne drilling over a '65' before two quick fire points from Liam Kavanagh and Davin McEvoy suddenly had them 0-9 to 0-7 ahead with six minutes to go having been behind five minutes previously.

There was to be plenty of drama to come. Cody Comerford's 65 came back off the post and into the path of Cathal Murphy who forced the ball to the net to put The Harps back into the lead - 1-7 to 0-9 with full time approaching.

Liam Kavanagh levelled in injury time but a monster free against the wind from Cody Comerford looked to have won it for the Harps.

That was until the final seconds when Shaun Fitzpatrick got the ball way out the field and sent over the final score in normal time as the sides finished all square - 1-8 to 0-11.

Extra time it was and the game was won in the first period. Abbeyleix played with the wind in that opening 10 minutes and after Colin Byrne scored a '65', a long ball in from Sam Quinn was dropped by The Harps keeper Oisin Conroy and the ball rolled into the net.

It was a cruel blow as there had been countless balls dropped out the field all evening but goalkeepers are unfortunately under the spotlight that bit more.

Colin Byrne and Shaun Fitzpatrick added further scores as they led 1-14 to 1-8 at half time in extra time.

The sides could only manage one point each in the second period. Killian Byrne added to the Abbeyleix total early on but as The Harps searched for goals, the best they could manage was a free from Comerford as Abbeyleix held on and claimed the title by six points.