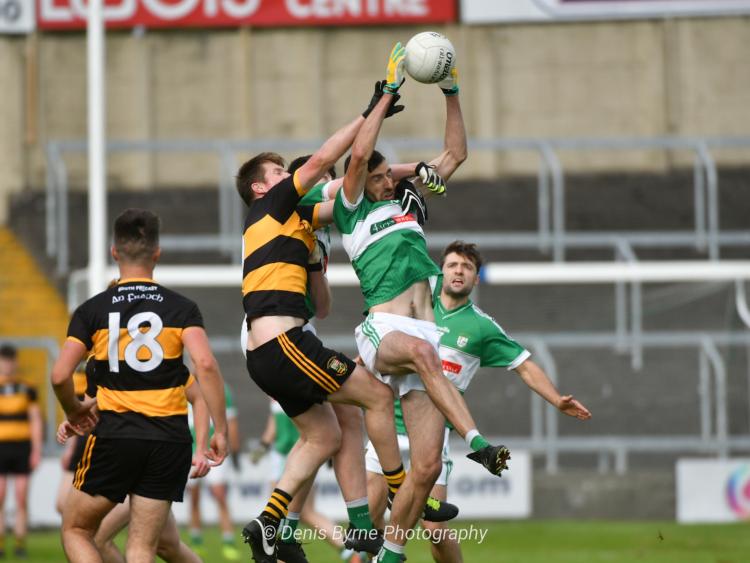 Ballyfin are through to a second successive Laois SFC semi-final after they proved too good for The Heath in their quarter-final clash at O’Moore Park today.

A purple patch of four points in a row in the first half was enough to give them a narrow lead, and they managed to hold onto that for the remainder of the game in a closely-fought affair.

With a strong wind blowing straight down towards the Abbeyleix end, it took both teams a while to settle into the game and the conditions. The Heath had the first sight at goal with a free from Conor Booth that tailed off to the right, but he made amends in the sixth minute with the opening score.

Ballyfin responded within a minute thanks to a free from Sean Moore, but Conor Booth hit his second moments later as the pace of the game finally started to pick up. Moore tied the scores again, this time from play, before his older brother James drilled a shot between the posts from the right wing to put Ballyfin ahead.

With their noses in front they pushed further ahead, James Finn adding another before Sean Moore got on the end of a long ball and pointed from a tight angle. The gap quickly became four thanks to a bit of individual brilliance from Sean Moore, as he showed brilliant footwork to evade a couple of Heath defenders on the left wing and slot over.

That was four points without reply in four minutes for Ballyfin and The Heath needed to respond, which they duly did. They worked the ball to Robbie Ging on the left wing and he raced through on goal before popping the ball over the yard from close range. That left the score 0-6 to 0-3 at the water break.

It took both teams a while to get going after the break but Ballyfin eventually got the next score as Sean Moore got his fifth of the half after a foul on Aidan Keenaghan. Robbie Ging hit back for The Heath with a brilliant individual score, jinking away from a couple of defenders before pointing off his left.

Ballyfin went four clear again when Moore hit another free but they should have had the first goal moments later. Aidan Keenaghan made a barrelling run through The Heath defence and got one-on-one with Joe Walshe, but The Heath goalkeeper made a brilliant save.

Robbie Ging then hit his third of the half, intercepting Robbie Foran’s kickout and sending the ball back over the bar to see three between them at the interval, 0-8 to 0-5.

The Heath had wind advantage for the second half but Ballyfin started the brighter of the two teams, winning a couple of early frees only to see them both miss the target. The Heath then got themselves within two when Chris Bergin, on as a sub at half-time, found himself in acres of space to slot over from 30 yards.

Goalkeeper Joe Walshe then came up to slot over a 45 for The Heath to make it a one point game. With momentum behind them they needed to kick on, but Ballyfin battened down the hatches and clogged up their routes to goal, eventually working a point through Sean Moore to leave it 0-9 to 0-7 at the second water break.

The closing stages favoured Ballyfin too, as James Finn landed a free and Sean Moore pointed after a patient move to make it a four point game heading into added time. The Heath needed a goal but it never really looked like coming, as Daithi Carroll landed a late free and Chris Bergin’s 14 yard free at the death blazed over the bar, leaving Ballyfin to run out two point winners.