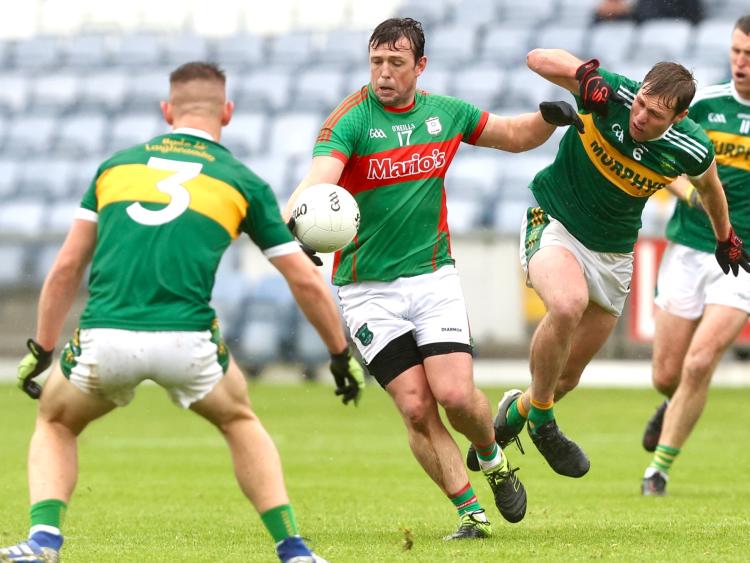 Graiguecullen are the second team into the Laois senior football semi finals after they accounted for Ballylinan early on Sunday afternoon.

Driving wind and rain battered O’Moore Park making for an extremely tough set of conditions with the Graigue men displaying a well structured and patient first half display against the wind to put in a strong foundation.

With the wind driving down to the Abbeyleix end goals, Ballylinan had the elements behind them for the opening 30 minutes.

It was hardly surprising that they opened the scoring in the second minute with a Gary Walsh free but that would be their last for a good 10 minutes as Graigucullen played some superb, patient football against the elements.

Brian Byrne opened their account with a free on four minutes before they stole a march three minutes later.

Ballylinan were attempting to play out from the back but the opportunistic Trevor Collins cut them off and played in Ross Hennessy who coolly found the back of the net to make it 1-1 to 0-1.

Gary Walsh sailed over a ‘45’ on 12 minutes to narrow the gap but it was the Graigue men who were controlling things as they led 1-1 to 0-2 at the first water break.

Graigue got the rub with the green soon after the water break when a speculative shot or pass, depending on your reading off it from Shane O’Neill drifted over the bar to add to their tally.

After Brian Byrne clipped over another free, Ballylinan almost got a lifeline on 25 minutes.

A high ball in was misjudged by the Graigue defence and with Cathail Dunne lurking in behind, the Ballylinan man slipped at the real wrong time. Although the goal chance was now gone, Dunne did manage to get possession and fire over to make it 1-3 to 0-3 with five minutes to the break.

Chris Hurley put Graiguecullen four points up but first half injury time was kind to the Ballylinan men with two Gary Walsh frees bringing them on to five points and leaving the half time score 1-4 to 0-5.

Seven minutes of the second half went by before we got a score with Graigue keeper Danny Bolger roaming forward and converting a free. Bobby Doyle and Chris Bolger added further points as the gap widened and Ballylinan struggled to maintain possession against the strong wind.

Bolger converted his second free of the day on 46 minutes just before the water break as Graigue led 1-8 to 0-5 as conditions worsened.

The water break gave Ballylinan a chance to regroup and with the next attack, they struck for goal with John Kealy catching a high ball, laying off to Gary Walsh and their main man making no mistake in finding the net to make it 1-8 to 1-5.

Bobby Doyle somehow kicked his second point of the day to reply for the Graigue men as he began to fall off balance.

That proved to be their final score of the game as Graigue join Ballyfin in the semi final draw while Jamie Farrell and Gary Walsh were sent off in injury time for Ballylinan.