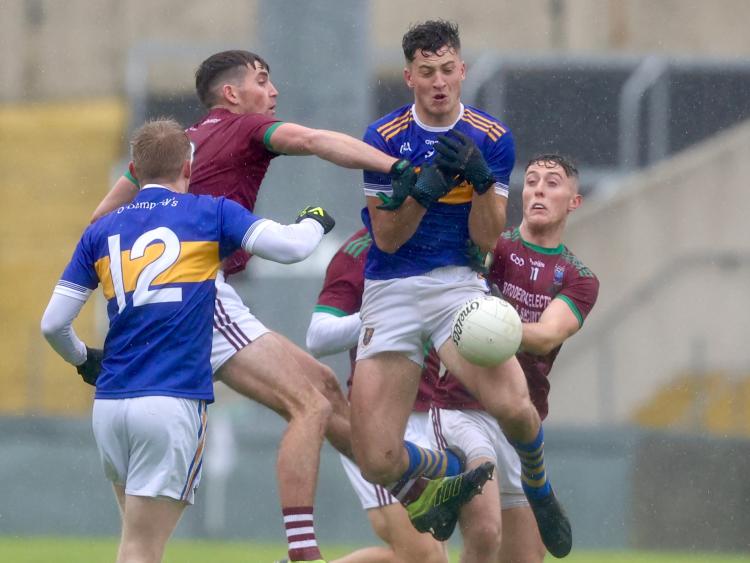 In adverse weather conditions, a strong defensive effort from Portarlington allowed them to get the better of neighbours O’Dempsey’s in a dogged and cagey affair. Portarlington have now knocked off Stradbally, Portlaoise and O’Dempsey’s en route to the semi-finals, and look a difficult outfit to stop.

Portarlington were the first team on the board in the second game being played in O’Moore Park. Sean Byrne played a clever give and go with Keith Bracken, and Byrne sailed one between the posts. Colm Murphy, who was a late boost to Portarlington after he recovered from an injury in time, pointed a free to extend the gap.

Colm’s brother, David Murphy, pointed Portarlington’s third and fourth score, as they settled they settled by far the quicker of the two teams. O’Dempsey’s finally got on the scoreboard after fifteen minutes of play, with Conor Meredith curling a beauty between the uprights.

Colm Murphy grabbed the first score after the water break though for Portarlington from a free, as his side led 0-5 to 0-1. However, Portarlington were dealt a blow when wing-back Stuart Mulpeter picked up a black card for an off the ball incident on O’Dempsey’s Barry Howlin.

O’Dempsey’s had the majority of the possession for the next fifteen minutes, but they struggled to find any openings in a well-organised Portarlington defence. It took O’Dempsey’s until the last kick of the ball in the first half of injury time to finally raise another white flag. Matthew Finlay nailed a free to leave O’Dempsey’s trailing 0-2 to 0-5 at half-time in a cagey affair.

O’Dempsey’s main man Conor Meredith had two chances at the start of the second-half that he failed to convert, and Portarlington’s clinical nature meant Adam Ryan extended their lead down the other end after some strong running resulted in a point.

Things went from bad to worse for O’Dempsey’s in the 38th minute, as midfielder Brian Nugent received a second yellow card and a resulting red for dragging back Sean Byrne. They did grab their first score of the second-half through veteran Peter O’Leary, but Portarlington’s Stuart Mulpeter returned from his sin-bin to give them an extra boost.

Despite being down to fourteen men, it was still O’Dempsey’s played most of the football. Mark Barry had a chance to slip in full-forward Daniel McCormack on goal, but the pass was just ahead of McCormack and slipped away for a goal kick to Portarlington, much to their relief.

Three points separated the sides as they went in for the second water break, 0-6 to 0-3 in Portarlington’s favour, and fourteen men O’Dempsey’s needed something special to pull this one out of the fire.

Colm Murphy was fouled upon the restart of play as he surged towards the goal, and he took the free himself to move Portarlington four points clear. O’Dempsey’s did reply though, with Mark Barry curling over an excellent effort despite Portarlington pressuring the shot.

O’Dempsey’s looked like they needed a goal, and despite many forays forward, Portarlington provided a tough wall at the back that they could not bridge. Stephen O’Neill kicked an insurance point in injury time to make sure Portarlington advanced through to the Senior semi-finals once more on a final score of 0-8 to 0-4.