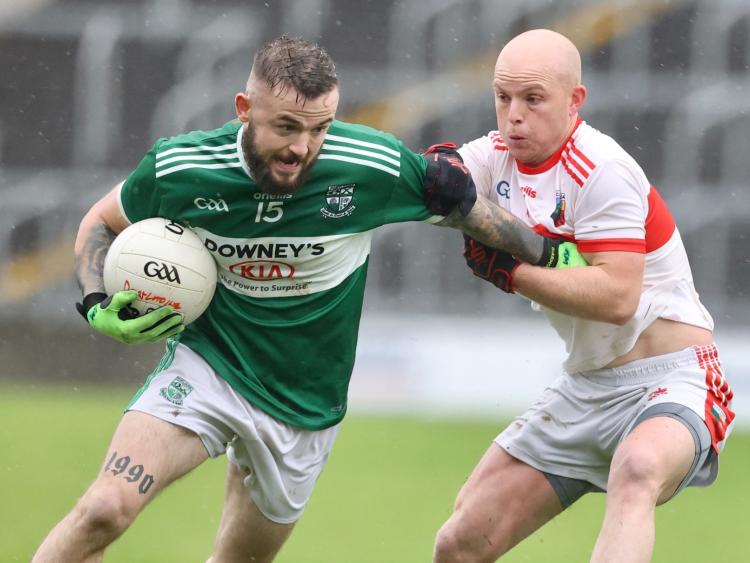 Despite the horrible weather conditions, reigning champions Portlaoise and Emo served up a titanic tussle that could easily go down as the game of the championship. Emo trailed 0-6 to 1-5 at the start of the second water break, but a heroic last fifteen minutes from the Emo men resulted in them toppling the three in-a-row champions Portlaoise at the quarter-final stage.

Portlaoise had the first chance of the game, but Kieran Lillis couldn’t curl his shot enough to get it in between the posts. However, John Kavanagh did manage to get Portlaoise on the scoreboard through a free after strong running from David Seale.

Emo responded, although it did take them seven minutes, through Jack Owens after he was fouled close to goals and he tapped over his free. Portlaoise went back in front moments later thanks to a lovely weighted 45’ from goalkeeper Graham Brody, and the same man knocked over another 45’ a minute later to give Portlaoise a two point cushion.

Portlaoise had a few goal chances before the first water break, with Ciaran McEvoy and Conor Boyle both getting on the end of separating moves, but both were denied by the gloves of Niall Gorman in the Emo goals. Portlaoise held a 0-3 to 0-1 lead after fifteen minutes, but they probably should have been further clear with the amount of possession they had.

Upon the restart, Portlaoise full-back Frank Flanagan extended his side’s lead with a superb score from distance after he claimed the mark. Corner-forward Ricky Maher added another from play, and you feared Portlaoise were beginning to get away from Emo.

Portlaoise continued to dominate possession, but failed to find any scores for the remainder of the half. Emo managed to get two points back, as Jack Owens and Paul Lawlor pointed from placed balls to leave the Emo men trailing 0-3 to 0-5 at half-time.

The Emo crowd were raucous when Nigel Murphy landed a score from the restarted throw-in to cut the gap to the minimum in O’Moore Park. Minutes later and the tide looked like it had completely turned.

Brian Glynn was handed a black card for an off the ball incident, and Paul Lawlor converted a free to level proceedings after five minutes of the second-half had been played. However, Portlaoise aren’t ones to usually panic in situations like this, and they fired in the first goal of the game straight after.

Gary Saunders picked out the unmarked Benny Carroll on the opposite side of the field, and Carroll sprinted with that burst of pace that he possessed past two Emo defenders before rifling it into the net.

Emo were now a goal down, but they were still a man up on Portlaoise. This was a critical period for them, and they needed to take advantage of their numerical advantage on the scoreboard.

Darren Strong landed a point after they won the ball back in Portlaoise’s half to leave two in it after ten minutes of the second-half had been played. However, Owens sent what looked like a straightforward free wide, and their momentum was halted.

Substitute Paul Cahillane used all of his experience to win a free for Portlaoise close the Emo goals, but this time it was Ricky Maher who missed from close-range. As referee Brendan Hickey blew for the second water break, Portlaoise led 1-5 to 0-6.

Another Portlaoise subsitite, Ronan McEvoy, raised a white flag for them on the restart, as his shot just went in off the post. However, Emo refused to lay down, and a monstrous score from Paul Lawlor was followed by Darren Strong’s second, as they left just one in it.

Darren Strong was having a right tussle with Kieran Lillis throughout, and one of the few times he had plenty of space to operate, he sent a wonderful crossfield ball to Paul Lawlor, who had all the time in the world to level things again.

With five minutes left, Portlaoise looked to have lost their way. When Jack Owens sent over the score of the game with the outside of the boot, Emo led and Portlaoise’s morale appeared down.

Owens was kept quiet for large portions of the game by the excellent Frank Flanagan, but Emo’s full-forward came in clutch just like he did against O’Dempsey’s in the previous round. After he curled over a beauty from out near the stand to give Emo the lead in injury time, Owens struck again moments later with an equally excellent effort to send Emo past the champions and through to the semi-finals.