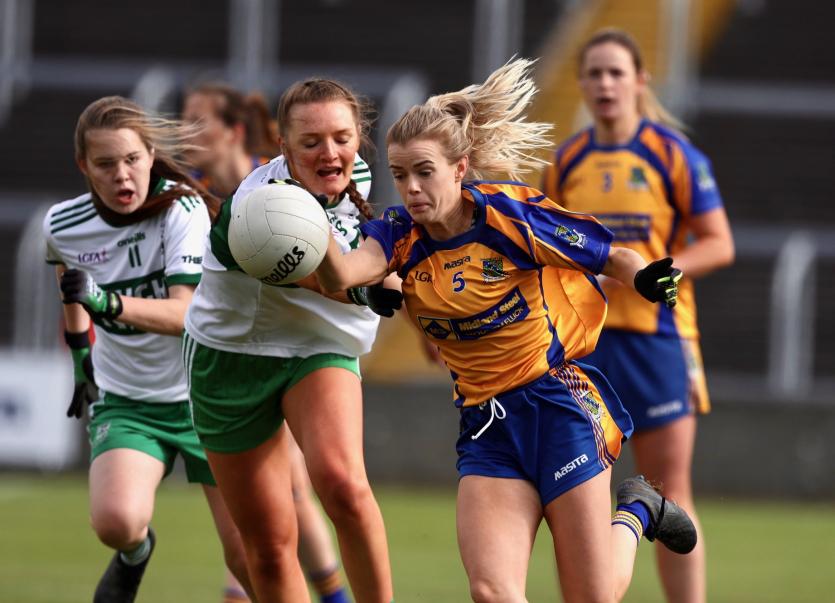 Portlaoise are through to the Leinster final

Portlaoise are into the Leinster Ladies senior club final after a 3-5 to 2-5 victory against Offaly champions Naomh Ciaran in Portlaoise on Sunday afternoon.

Played in horrendous conditions, with a gale force wind and a constant downpour of rain for 60 minutes, it was goals from Sarah Anne Fitzgerald, Leah Loughman and Alison Traynor which got Portlaoise over the line to book their place in the Leinster final.

A cross-field breeze on the day favoured Naomh Ciaran in the first half and they got off to a perfect start. Amy Gavin Mangan played a smart one-two with Elle McEvoy and her shot blazed past Portlaoise goalkeeper Aoife Conlon Hyland to open the scoring. With both teams struggling to grasp the difficult playing conditions, it was Portlaoise who picked off the next three scores.

Two points from Aisling Kehoe and a point form Ellen Healy got Portlaoise back level in the 16th minute. They almost had a goal, but Sarah Anne Fitzgerald’s shot dribbled just wide of the goal to leave the sides level at the first water break, 1-0 to 0-3.

Portlaoise were much the brighter side following the resumption of play and they got their first goal just after the water break. Some brilliant individual work by Alison Traynor found Sarah Anne Fitzgerald inside the square who fisted the ball to net.

Ciaran responded and points from Kaitlin Rigney and a Kate Kenny free brought Naomh Ciaran back into it and made it a one-point game, with 25 minutes played.

Portlaoise’s response was excellent and they had their second goal of the game shortly after. A goal mouth scramble fell to Leah Loughlin who drilled the ball to the net. Having played all the football, Portlaoise found themselves with a deserved four-point lead at half time on a score line of 2-3 to 1-2.

Kate Kenny reduced the gap to three just after the half time break as it looked like they might push on and get a few more scores. However, just as Naomh Ciaran began to gather momentum, Portlaoise delivered a sucker punch, when Alison Traynor drilled the ball to the back of the net to increase their lead to six. Naomh Ciaran, who were now operating with 14, after Emma Maher was sent to the sin bin were really struggling to break down the outstanding Portlaoise defence.

With underfoot conditions deteriorating, and some puddles on the pitch becoming visible, both teams really struggled to cope. Kate Kenny pulled a free back for Naomh Ciaran, but Sarah Anne Fizgerald cancelled this out with a point of her own.

With time running out, Naomh Ciaran began to panic. They made numerous mistakes and the Portlaoise women weather the storm both on and off the pitch. Portlaoise almost put the icing on the cake when Alison Traynor raced through and buried the ball to the net, but she was adjudged to have taken too many steps.

Roisin Egan pulled a goal back at the death for Naomh Ciaran when her shot deflected past several Portlaoise bodies. However, Portlaoise held on, despite some nail-biting moments at the end. They march on the Leinster senior ladies final and will be hoping to add some more silverware to an already historic year for them