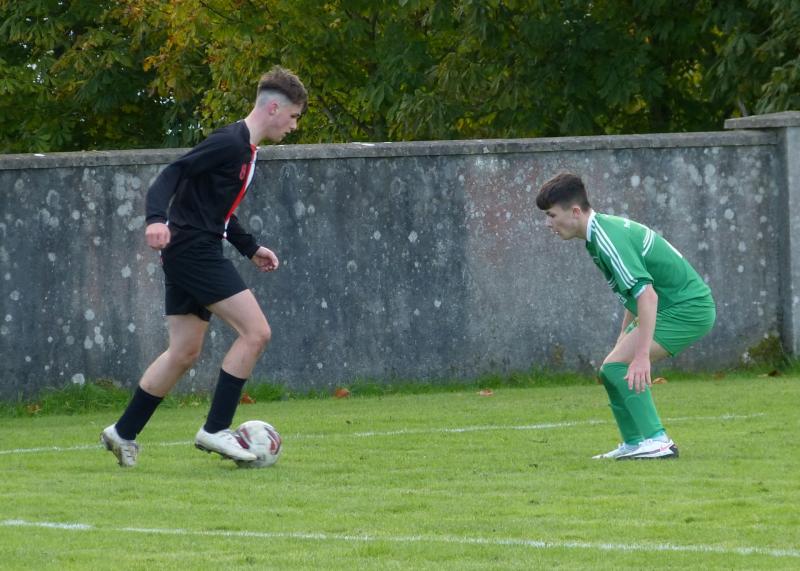 Ben McDonald in action for Portlaoise

A day of firsts beckoned for this Portlaoise AFC side in Athlone - first game of a new season, first time in the Combined Counties Football League (CCFL), first time to play against Monksland Utd, first season to play 45minutes a half and first day out for several new or returning players.

21 minutes and the home side took the lead. The attacker was fouled on the edge of the box and the resulting free was deflected off Ben Doyle sending AFC keeper Kacper Banacik the wrong way.

10 minutes later Kacper pulled off an important save from another corner in a packed box when AFC were still struggling to create goal scoring chances of their own.

would save his team again on the stroke of half time with an excellent save after one of his defenders got caught out by the attacker.

AFC did improve in the second half. A few changes from the bench and no doubt some "words of inspiration" sent them back into battle.
After solid work by Imran and Robbie in the middle, Ben Doyle was unlucky to just shoot wide.

Monksland weren't lying down either and they sent a shot over the bar at the other end almost immediately.

AFC drew level after Daniel Gorman sent Kieran O'Donnell flying into the left side of the box. Monksland's keeper who was also having a good game was just unable to hold the initial shot and Ben Doyle was there to smash it in to the roof of the net.

Debutant Fionn Devoy nearly marked his debut with an AFC goal on 58 after sent being sent in by Ben Doyle after Imran had broken up another attack, but the keeper proved his worth to save.

AFC were really piling on the pressure now hunting a second goal.
Fionn, Robbie, Ben Dwyer and Ben Doyle were all unable to add that elusive second goal.

At the other end though a really important interception by debutant Jack Lalor to nick it off the toe of the striker waiting at the penalty spot as he was about to volley on goal.

Imran Shitta was immense breaking down play after play in the middle.
AFC just could not find the winner creating several chances. The best chances fell to Kieran O'Donnell scrapping for a chance but shot wide when could have passed to team mates well placed nearby and then Colin McEvoy stumbled with a glorious chance in the box.

Seven to go and a chance hit the post but it was offside anyway.
The game finished 1-1 and a decent opener to the new season.