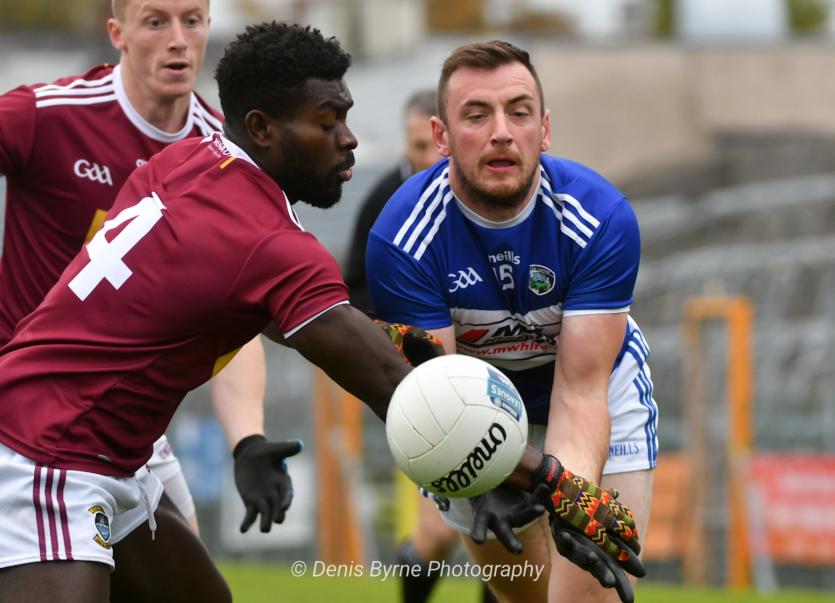 Laois crashed and burned in Mullingar on Saturday afternoon as their promotion hopes went up in smoke following a 1-18 to 0-13 defeat at the hands of Westmeath.

They can’t have any complaints either. They played second fiddle for the 70 minutes and while they did have a couple of half goal chances, they never threatened to take over the Westmeath lead that saw them boss the game from pillar to post.

Westmeath were the dominant force in the opening half. Superior around the breaking ball and running off the shoulder, the Westmeath men showed their worth and build up a handsome lead early on before Laois finally got motoring.

Laois looked lethargic in the opening 35 minutes. They hadn’t the same fire in the bellies that their opponents and it showed on the scoreboard.

Westmeath went 0-7 to 0-0 and although they had the aid of the breeze, it wasn’t overly strong.

John Heslin was in fine form kicking some superb scores from play and from frees while the running of Kieran Martin from wing forward was causing all kinds of trouble for the Laois men.

Mark Barry did have an early goal chance saved but after that, Westmeath began to rack up the scores with Ronan O’Toole to the fore along with Heslin.

Evan O’Carroll kicked another free just after the water break before Heslin and Niall Corbet traded placed balls to leave it 0-8 to 0-4.

Ray Connellan was excelling at midfield and he slapped over the score of the half for the home side before Gary Walsh passed up a goal chance to blaze over the bar.

At 0-10 to 0-5, Laois would have taken the half time whistle but alas, there was five more minutes to be played and Connellan and Ronan O’Toole added points to leave the Westmeath men seven clear at  half time – 0-12 to 0-5.

Laois did come more into it in the second half but the damage was done in the first 35 minutes. Diarmuid Whelan kicked their opening score of the second half, their first from play in the game but Westmeath were also keeping the scoreboard ticking over.

Niall Corbet landed another free but Evan O’Carroll spurned what looked to be a routine free and pulled it wide.

Danny O’Reilly was introduced at half time and kicked one from distance to make it 0-14 to 0-8 but with 15 minutes to play; Laois were still some distance behind.

The impressive Ronan O’Toole kicked another super score just before Gary Walsh was wayward with a half goal chance for the Laois men.

It wasn’t going to be their day but the effort levels stayed high. There had been a few half chances for goals throughout the game but one finally arrived when Jamie Gonoud finished off a fine team move to the net to make it 1-16 to 0-8.

Gary Walsh hit four frees in succession in the closing stages to bring it back to 1-16 to 0-12 but the game was well over as a contest at that stage.

Walsh did kick the final score of the game but it finished with an eight point loss for Laois.

They will know have to beat Fermanagh next Saturday to ensure they are not relegated back down to division three.