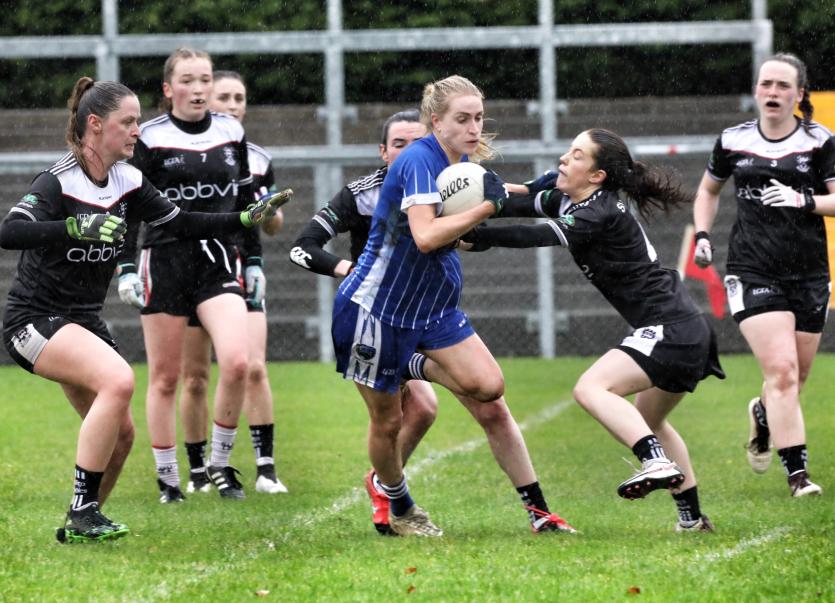 Laois started their Championship off with a convincing 16-point win over Sligo in a rain and wind swept Kiltoom on Sunday afternoon. Laois led from start to finish and were impressive throughout the game despite the difficult conditions. Laois raced into an early lead and by half time and had an nine point lead at half time and never looked back from this. It sets up an intriguing game next weekend against Clare who were narrowly beaten by Kildare in the other game in the group on Sunday.

Laois, playing with a strong breeze raced out of the starting blocks and registered their first score after just 25 seconds of play courtesy of a long rage point by Orla Hennessy. Mo Nerney doubled their lead just two minutes in from a free as Laois looked to capitalise early on the strong wind and rain blowing in their favour. Sligo pulled one back through a Rachel O’Brien free as both teams struggled to cope with the difficult playing conditions in the opening minutes.

Laois found the net for their first of the day in the 12th minute, when former camogie star Sarah Anne Fitzgerald drove the ball past Laura Muldoon in the Sligo goals. Just two minutes later, Mo Nerney found her cousin Laura Nerney with a neat kick past, and Laura made no mistake in rattling the net for the game’s second goal. Laois were cruising as we headed for the first water break. However, just before the whistle blew, Sligo responded. Lauren Boles worked a wonder goal as she collected possession in the corner, rounded her marker and buried to the net to cut the deficit to four at the first water break.

Laois once again raced out of the blocks with the resumption of play and found the net for the third time when Emma Lalor capitalised on a mistake in the Sligo defence and drilled along the ground past Muldoon once again. Mo Nerney and Orla Hennessy added further points to give Laois a nine-point lead at half time.

Any hopes of a Sligo comeback were dashed in the third quarter when they outscored Sligo by 1-3 to 0-0 in the second half. Orla Hennessy teed up Andrea Moran who calmly slotted the ball low into the net for Laois’ fourth goal of the day. Hennessy turned scorer when she split the posts one minute later before two points from half time substitute Leah Tarpey increased Laois’s lead to 15 points at the second water break.

The fourth and final quarter was scrappy as the constant rain began to influence the underfoot conditions. Passes went astray and there was some wayward kicking from both sides. Scores were hard earned, but Rachel O’Brien did pull a free back for Sligo, as both teams began to empty their respective benches with the contest effectively over. Laois put the icing on the cake in injury time when Emma Lalor found substitute Rachel Fitzgerald who rounded the keeper and blasted into an empty net to round off a perfect performance from Laois on a score line of Laois 5-8 Sligo 1-4.