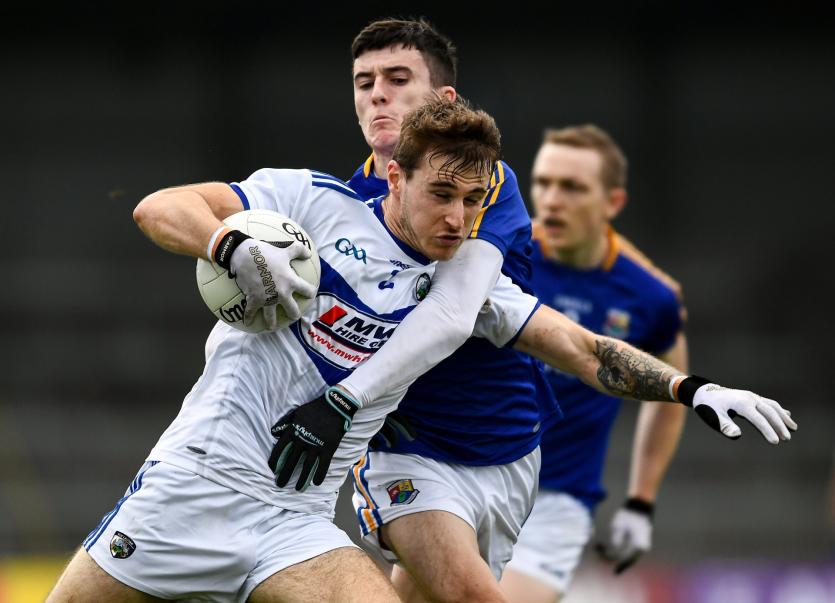 Trevor Collins looks to break out of defence

Laois are through to play Dublin in the Leinster senior football semi final after they came from looking dead and buried early in the second half to powering on for the win.

Longford held the ascendency at half time and had two glorious goal chances early in the second half but two fantastic saves from Niall Corbet stemmed the tide before Laois kicked on for a huge win.

It was a tense and full blooded affair and Laois who in truth were poor in the opening half, really came out swinging in the second half led by Captain fantastic John O'Loughlin in the middle of the field.

The opening half provided plenty of scores and it was the Longford men who set out their stall early on. As Laois struggled to meet the pace of the game, Longford made hay by attacking in numbers.

Daniel Mimnagh and Liam Connerton but them two to the good early on before Gary Walsh got Laois off the mark with a free in the seventh minute.

From the resulting kick out, Longford stung the Laois men with Dessie Reynolds getting on the end of a fine move and firing past Niall Corbet to make it 1-2 to 0-1 after just eight minutes.

Laois were in trouble and aside from Evan O'Carroll, they looked toothless in attack.

Longford extended their lead to 1-5 to 0-2 on 16 minutes and Laois were in dire need of a spark to get them going.

Mike Quirke's men began to get a handle at midfield and with that came their opening goal.

Evan O'Carroll got out in front once again and he fed the onrushing Paul Kingston and the Killeen man fired a rocket to the Longford net to get Laois back in business.

Two Gary Walsh frees and a monster score from Kingston from all of 50 metres suddenly brought Laois back to within a point of Longford - 1-6 to 1-5 having trailed by six points 10 minutes earlier.

Unfortunately Laois couldn't keep the scores coming and Longford found another purple patch with the excellent Donal McElligot and Rian Brady to the fore as they opened up a 1-10 to 1-5 lead with half time approaching.

Laois did get a bit of momentum in first half stoppage time as points from Gary Walsh and Mark Barry narrowing the gap and sending them in 1-10 to 1-7 behind at the break.

Longford should have put the game to bed in the opening five minutes of the second half but Laois keeper Niall Corbet saved from point blank range from both Donal McElligot and Dessie Reynolds in those opening five second half minutes.

Reynolds did make amends to put Longford 1-12 to 1-7 ahead and they were in complete control of the game. Laois were resilient though and kept plugging away.

Michael Keogh and a super score from John O'Loughlin brought it back to 1-12 to 1-9 before Ross Munnelly curled over a mark with his first touch after coming on as a sub.

Laois were now on a roll and a free from Gary Walsh left only a point between them with 20 minutes to play.

Trevor Collins kicked Laois in front for the first time in the 56th minute, something that looked extremely unlikely in the early stages of the second half.

Laois began to turn the screw and when Longford corner back Paddy Fox picked up a black card on 59 minutes for fouling Evan O'Carroll, Gary Walsh sent the free over to make it 1-14 to 1-12 with a little over 10 minutes to play.

Longford were not going down lightly and points from Rian Brady and Joseph Hagan levelled the game with three minutes of normal time to go.

Tension was high at this stage and a soft free for Laois resulted in Gary Walsh tapping over from close range to put Laois ahead right on 70 minutes.

Chances came at both ends but in the end a late Sean O'Flynn point sealed it as they march on to play the Dubs.