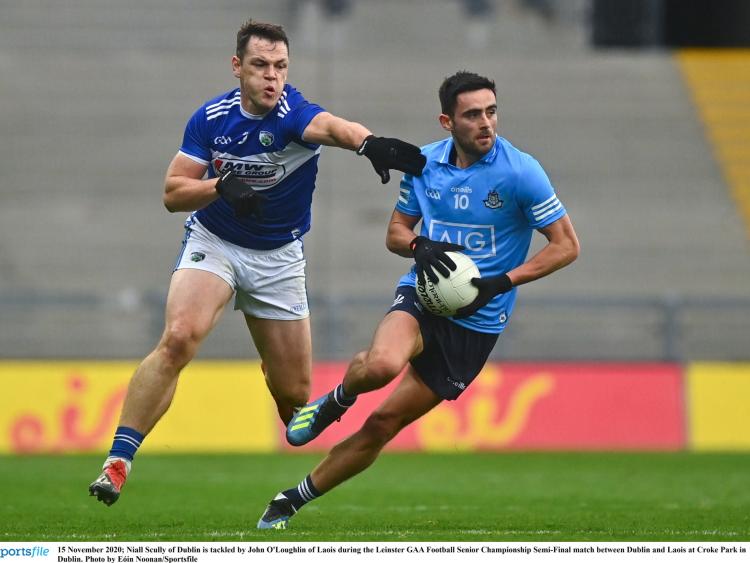 Laois are out of the championship and finished for 2020 as a more clinical and powerful Dublin overcame a sluggish start to win by 22 points and advance to a Leinster final meeting with Meath.

The second half proved to a mis-match as Dublin went up a gear and Laois were left stuck to the ground. After a competitive opening half, during which Laois had their chances to be a lot closer than the eight point half time margin.

For the opening 20 minutes or so, it was all going well. Laois were given as good as they got, creating chances and not bowing to the men from the Capital.

Evan O'Carroll got around his man in the second minute but his shot rattled back off the post. An early let off for Dublin but a miss that Laois could ill afford.

Brian Fenton eventually opened the scoring a minute later before the same midfield powerhouse burst through only for Niall Corbet to pull off a sensational save to deny Raheny man. Dean Rock landed the resulting '45' but Laois were about to get going.

Sean O'Flynn, Paul Kingston and Brian Byrne were all working well and with seven minutes on the clock, their first score arrived courtesy of Gary Walsh.

Dublin went 0-3 to 0-1 up but Paul Kingston got out in front of Johnny Cooper once again and kicked over to leave just a point between them on 11 minutes.

After an eight minute scoreless spell, Dublin found an extra gear and began to pull away. Ciaran Kilkenny slapped over before Fenton set Sean Bugler through and the new kid on the block found the bottom corner to make it 1-4 to 0-2.

While Laois were extremely competitive right through the half, they were turned over too often and the Dubs kicked the last three points of the half to leave them leading 1-7 to 0-2 at half time.

Laois got off the mark with the first attack of the second half. Kieran Lillis delivered a long ball into Evan O'Carroll and the Crettyard man took his mark and tapped over.

Ciaran Kilkenny quickly cancelled that out and quickly began to up the ante.

With seven minutes gone in the second half, the result was pretty much put beyond doubt. James McCarthy made a piercing run through the middle, fed Ciaran Kilkenny and with some neat skill, soccer styled it to the net.

A quick fire Brian Fenton point with the next attack and Dublin were cruising 2-9 to 0-3.

Gary Walsh sent over a well taken free before being called ashore for Ross Munnelly as both sides rang the changes on 45 minutes, with five subs in all coming on at the same time between the two teams.

Fenton and a first for Con O'Callaghan added to the Dubs tally before Cormac Costello curled over a mark to leave it 2-12 to 0-5 at the second half water break.

Dublin kept the hammer down and went 2-14 to 0-5 in front before Brian Byrne added a super solo score. Ross Munnelly added a free soon after but it was only consolation at this stage as Dublin led 2-15 to 0-7 coming into the final 10 minutes.

It was all Dublin in the closing 10 minutes with Cormac Costello in particular to the fore finishing with seven points having only came on in the 45th minute.