Jamie Muldowney to blog his journey for the Leinster Express 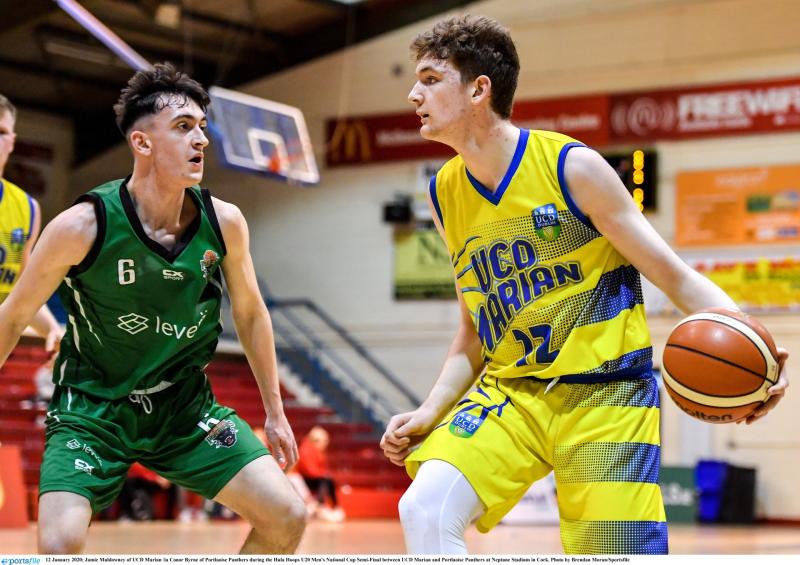 Killenard native Jamie Muldowney is starting out on a new and exciting venture as he takes up a basketball scholarship in America. Here, we chart his journey and how it all came about while the man himself will keep readers up to date in the months ahead with his blog from the States.

The Killenard youngster had a busy 2019/20 season with over 80 competitive games amassed until Covid-19 brought a shuttering halt to the sporting world in Ireland.

Having started out playing with the Portarlington Kestrals, Jamie Muldowney's talent and ambition grew as he progressed in years and a move to UCD Marian put him in a bigger spotlight.

His time with the Kestrals was an enjoyable one but right throughout his underage career, the Portlaoise Panthers were the club that broke his heart all the way through with some heartbreaking defeats.

It's fitting that when lining out for UCD Marian against the Panthers back in February of this year, his father Seamus sensed that it wouldn't be long before his move to America would become a reality.

“It was on the short journey from Killenard to Portlaoise for that game that we (his parents) decided that if the offer came to further Jamie in the game came, we would let him go”, explained Seamus Muldowney.

The Panthers were the team looking for this time and Jamie was lining out for UCD. UCD Marian had knocked the Panthers out of the U20 National Cup semi final back in January. The hall was full, atmosphere electric and Panthers exploded out of the blocks.

Shots fired from every part of the floor filling the baskets on both ends. By the time half time came the Panthers led 52 - 41.

When the fourth quarter started, the Portlaoise Panthers lead had grown to 19 points and UCD Marian were finished.  The roller coaster ride was going downwards again after a heartbreaking defeat for UCD to Moycullen in the National Basketball Arena in the U20 National Cup Final in Tallaght a few weeks prior.

“I remember Seamus Darby’s goal, Dawn Run coming up that hill in Cheltenham, Laois winning Leinster and recently Shane Lowry Open success however nothing has ever given me so much elation than the comeback that was to unfold”, beamed Seamus Muldowney.

“32 -5 in the fourth quarter. When Jamie fired in his 25 point of the game and the exhausted referee blew the final whistle, I knew a trip to Dublin Airport was coming.”

At 17 years of age on the 28th August 2020, Jamie Muldowney took another step towards his dream. In the middle of a worldwide Covid 19 pandemic he honoured his commitment to Trinity Collegiate School and boarded a half empty plane in Dublin airport - flying to the USA to play high school basketball in South Carolina.

All his teenage life he challenged himself to become the best, his best. He considers himself as the player that started from the bottom and worked his way up on every team he played with.

To play basketball was not his idea as a young boy. Like everything there has to be a coach and a team that catch your imagination. In the Killenard area - Louise Foster was that lady.

Jamie recalls; “I was roped into playing basketball by Louise and she reached out to kids in school to play”.

There was nobody Jamie wanted to coach him through his young years other than Louise. The basics were thought correctly from the start and from the age of 9-15 Jamie’s progress was slow and steady. The end of season team award for being the MIP (most improved player) was a regular award bestowed on him.

At the start of the u16 season playing with Kestrels in the Midlands League Jamie was a considerable way down the pecking order but by the end of the season, he was a vital cog in the team.

The following season Jamie started to play senior basketball with Kestrels, starting at the bottom and working his way up again.

At 16 years of age he was playing u18 Midlands League, Senior Basketball and Schools Basketball. He then tried out for the Midlands Regional Team and this was where the breakthrough came.

In September 2018 the Midlands Team won the National BIPPS title in the Kingfisher Gym in NUI Galway and the MVP (most valuable player) was Jamie Muldowney.

The u17 Irish National trials were weeks after and his name still echoed in the minds of a few coaches.

Paul Langan and Fu , managers of the Irish u17 development squad, invited him onto their panel following a good trial and Jamie’s dream to wear the Irish jersey was just one step away.

When Spring 2019 arrived a mini Irish invasion occurred as 24 Irish players followed by family arrived in Mulhouse in France to see their child earn their first international cap.

The ‘Kids Game Basket’ tournament had a mixture of strong European clubs and International teams.  An Israeli team withdrew from the tournament and the Irish squad were asked to split into two teams which meant loads of game time for the development squad.

Jamie got to participate against players of an elite standard and saw the standard that had to be reached and he went on to average 14 points a game.

Following the French tournament, Jamie finished the season with Kestrels and Colaiste Iosagain while continuing to train with the development squad. Throughout the summer of 2019 he attended several basketball camps.

If he couldn't find a game or training session he lived in the community hall in Killenard all summer continually practicing for hours on end. The sound of a basketball in the hall could be heard at any hour in the peaceful village of Killenard.

The last camp of the summer was ‘SDA Camp’ in Gormonston College in Co Meath. Young elite basketball players ran through their paces for three days solid, every move recorded to make profile videos to show to coaches in America.

Organised by Paul Cummins, a former International himself, this SDA Camp proved to be the key that opened the door for Jamie.

Jamie was MVP for the camp and the idea was planted that he had a chance at making it in the America. 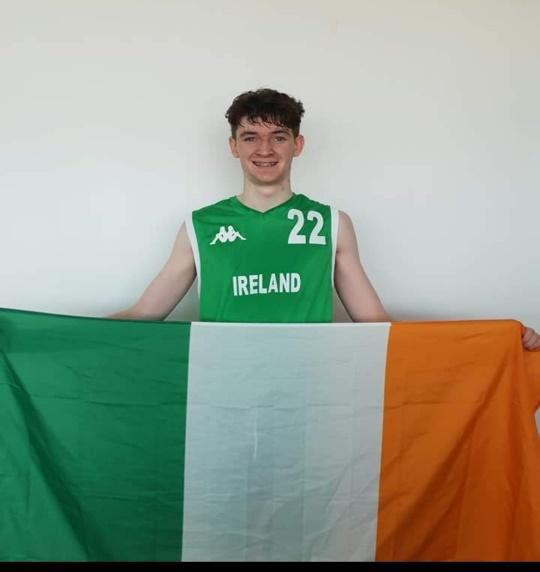 Those thoughts were put to the back of the mind as a number of interesting challenges lay ahead.  The Irish u18 trials were next on the agenda as he now focused on making that team.

To give himself a chance at furthering his career in Basketball, a change of club was advised and in the Autumn of 2019, Jamie Muldowney transferred to UCD Marian. Two of his friends on the Ireland u17 squad were on the u18 team and Jamie’s addition made them a force to be reckoned with.

However, a surprise was in store as pre-season began with Jamie getting to train with UCD Marians Super League team.  The jump in standard was just what the doctor ordered.  When pre-season matches started, Jamie sat patiently on the bench for a chance.  When it arrived he took it with both hands.

The 2019/20 season saw Jamie play over 80 competitive games.  He played Dublin League u18 u20, National Cup u18, u20,  u20 National League, Men’s Super League and not to mention Schools basketball with Colaiste Iosagain.

Every day after school the car would leave Killenard for Dublin to train or play matches.  Every weekend Jamie could be in Cork, Belfast, Galway or Dublin.  He also had the full day training sessions with the Irish u18 squad which fell once a month.

Covid 19 then stopped the world but Jamie Muldowney got his due rewards and is now in South Carolina ready and willing for their season to start on the 30th of November.

It has been a great experience so far but there are plenty of hurdles. The heat, loneliness, Covid-19 and the cost just to name a few.

Jamie's first blog from South Carolina for the Leinster Express will explain how Jamie got there, coping with the change from Leaving Cert to High School, missing home, the training and the new fast and furious high school game. 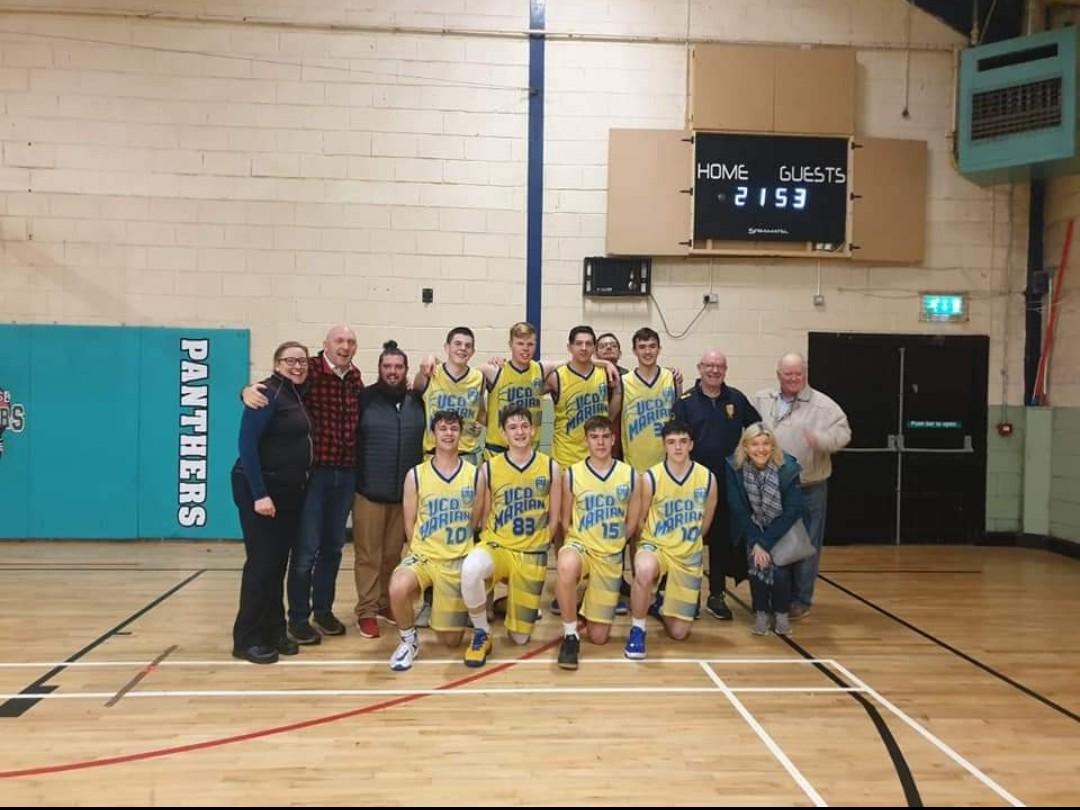