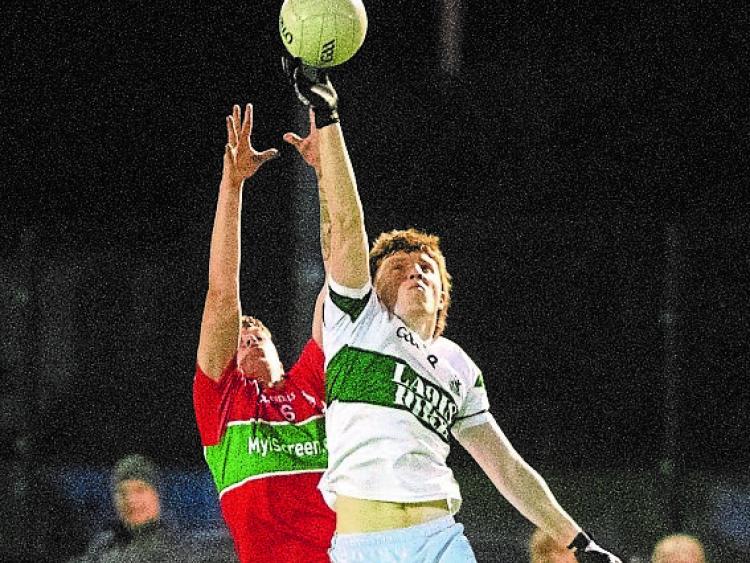 Sam Birrane and Kian Lawler contest this breaking ball. Both men are on the Minor football panel.

Two months ago in October, the Laois Minor Football team for 2020 were informed that their opening round Leinster Championship fixture against Carlow was postponed due to Covid-19 restrictions.

However, last week the GAA gave the all clear to restart the underage provincial championships this week, with Laois set to face Carlow in O’Moore Park this Saturday.

Unfortunately, there will be no home support for the Laois Minor footballers to call upon, with no crowds allowed at the game. They will not be without plenty of motivation though, as a win against Carlow would send them straight through to the provincial semi-finals, where they would face the winners of Meath and Westmeath. With Dublin already knocked out of the competition, this could be an opportunity for these talented footballers.

If the standard of some of the Laois Minor club football games earlier this season are anything to go by, then there wouldn’t appear to be any shortage of talent at this age group. Ballyroan Abbey brought back their second Minor ‘A’ Football title in three years in September and they have four representatives on the panel.

Davin McEvoy, Odhran Delaney, Shaun Fitzpatrick and Padraig Rafter were all part of that Championship winning Ballyroan Abbey outfit that are on this Laois panel.

Portlaoise, who lost that Minor ‘A’ final to Ballyroan Abbey in September, have eight representatives on the panel. Underage football in Portlaoise hasn’t been as strong as it used to be over the last decade, so it’s healthy to see a strong representative of footballers from ‘The Town’ on this year’s panel.

Graiguecullen have five players on the panel, while Portarlington have four.
The Laois Minor football manager is Mark Bates, a Dublin man who was over the Laois U-15 footballers last year. Bates impressively led that group to the Adam Mangan Cup final where they knocked off big county's like Galway and Cork along the way. Despite defeat in the final to Kerry for the Laois U-15’s, it was a very positive season and a number of the players that played that day feature on this year’s Minor football panel.

The Laois captain for the season is Park Ratheniska’s Brian Fingleton, while Arles-Killeen’s Colin Dunne was selected as vice-captain.