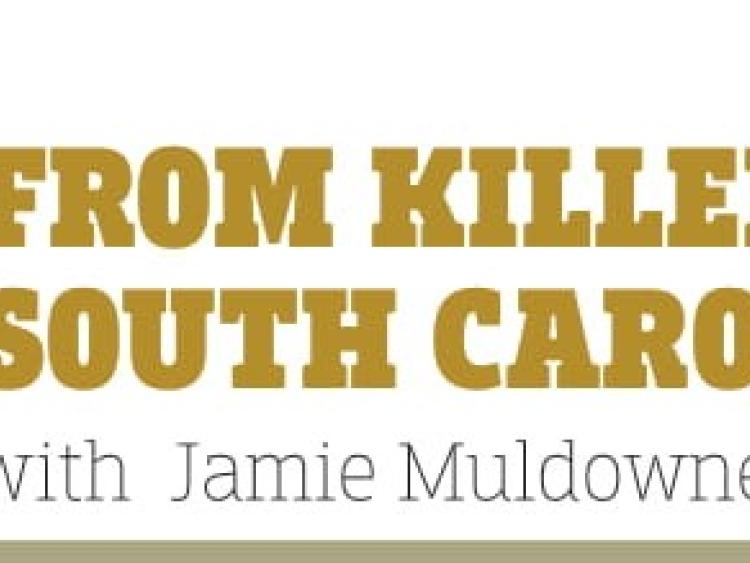 Before I made the decision to go to Trinity Byrnes Collegiate in South Carolina, I had received several offers from different clubs and schools in Ireland and UK.

When this offer came in it felt like the right fit.  The coach over the high school team Mike Teasley had come highly recommended by Paul Cummins from SDA camp.

Jason Killeen had come through the system of which Mike Teasley was part of and with people to consult with, who had first-hand experience of what might be ahead, my decision was made easier.

Another part of the decision process was COVID-19.  I was in 5th year and school stopped halfway through the term so a fresh start in ‘11 grade’ in High School felt attractive to me and my parents.

The offer from Mike Teasley in Trinity Byres Collegiate came in May 2020.  After two weeks of discussions between me, my parents, and Coach Teasley we decided we were going to go through with this. 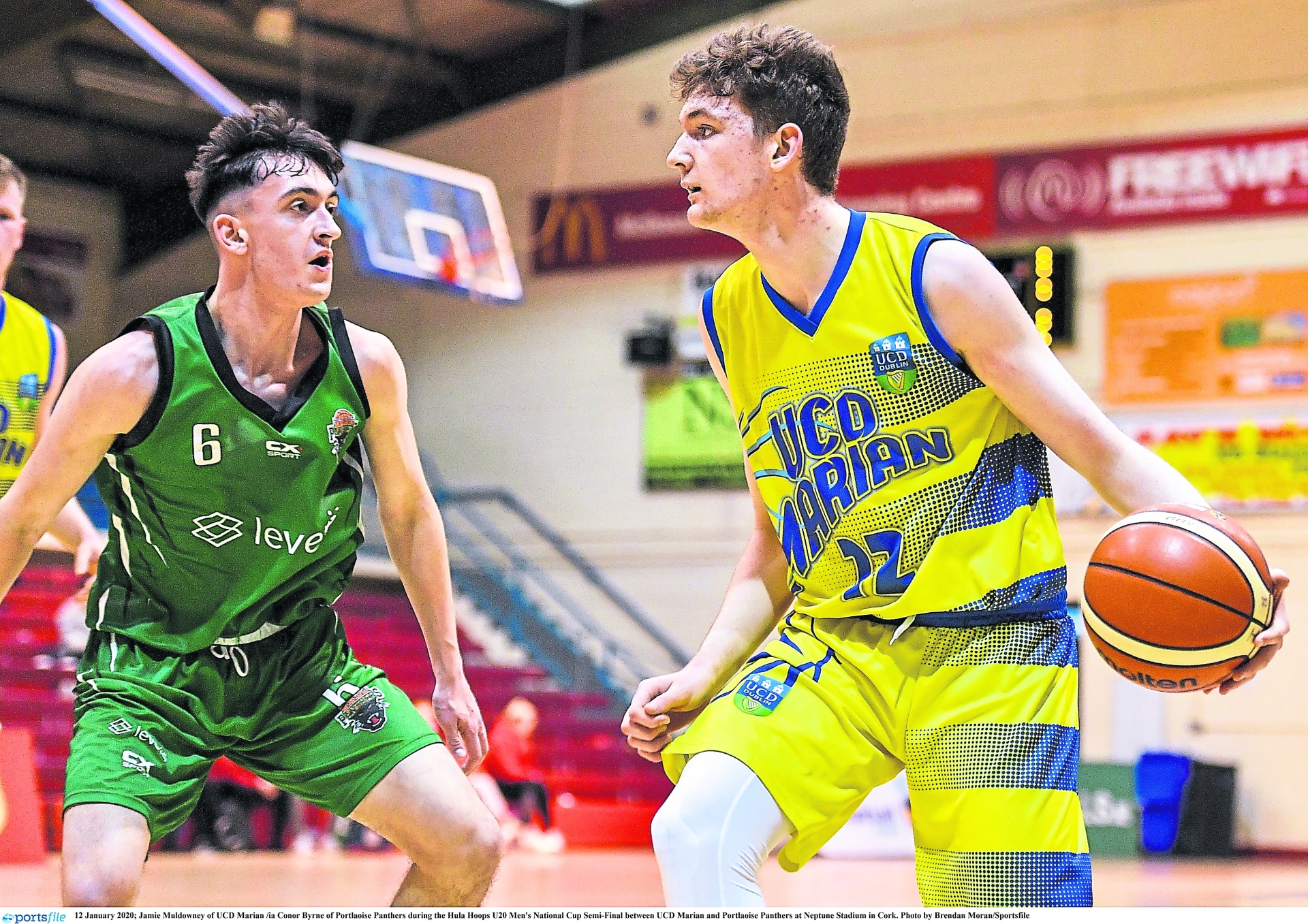 So, offer made and accepted.  What do I have to do?  For me it became time to try and physically prepare at a time when the gyms were still closed so I did what I could at home. I had a key to the hall in Killenard Community Centre.  My dad and I would spend hours over in the hall and  we would set up shooting drills from different parts of the court.

Some of the drills were recorded and we would send them to Coach Teasley in South Carolina.  He suggested different ideas which helped improve the drills we did. Basketball training is something I enjoy but the commitment level required is high.

A hobby was suggested by my dad. He asked me to play golf and set up membership at the Heritage Golf Club which was at our doorstep.

I finished the summer playing off 17. I now had a hobby to take with me to America which benefited me greatly.
Throughout the summer I followed the instruction of Coach Teasley.

I got into the routine of doing push ups, sit ups, squats, calf raises and planks all essential exercises for any basketball player along with a lot of sprints. I was conscious that fitness and speed was big in the states.

28th August 2020 and time to go to America. I felt more than ready to go. In 2019 Dublin Airport welcomed 32.9 million passengers through its gates. I googled it.

When we got there, it looked like we were the only people in the airport. COVID-19 lockdown. Everything was fine and there were no tears until we got to security when my parents could not go with me anymore, it was an emotional moment like it would be for anyone leaving home for good like I was. 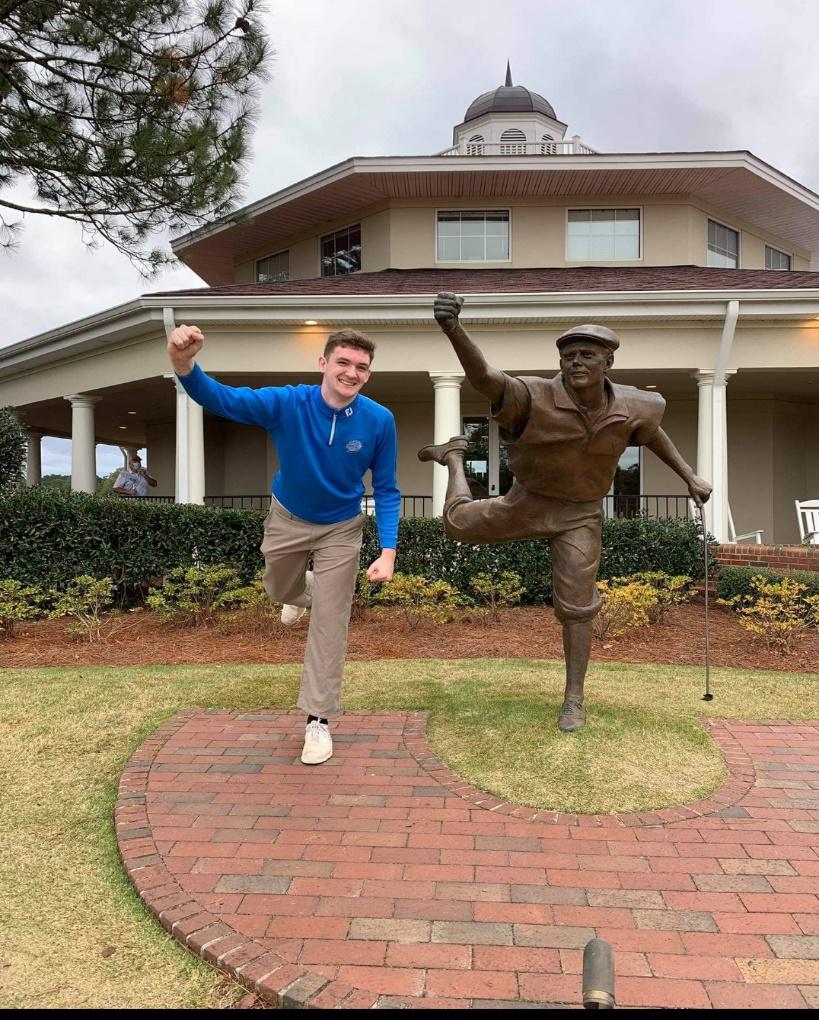 Stepping on to the plane started a 24-hour long journey that would conclude with me getting to Coach Teasley’s house in South Carolina. My first flight was an 8-hour trip to Chicago. Being 6ft 6, leg room is essential and thank god I got one of those seats with plenty of room.

A three hour flight to Charlotte followed from Chicago and I was greeted by my coach Mike Teasley and the women’s coach Cornelius Snead.

I spent a week in Coach Teasley's house isolating. I was tested for COVID-19, after my test came back negative, I was able to join the team for practice.  I felt prepared.

The first preseason practice I almost threw up. We had a full hour and a half session in the weight room followed by an hour of basketball practice. This was common enough for the first two weeks. There were several different coaches for the weights in the gym to the various basketball drills in practice.

During the preseason Coach Teasley would bring in some college kids for the local D2 school and a guy from the D1 school of South Carolina.

When I say D1 and D2 schools I mean Division 1 and Division 2 colleges.  This is where I want to ultimately go.
The dream is a full scholarship to a major basketball college down the line. To get scholarships to Division 1, 2 and 3 colleges you must get noticed.

Playing with these players really showed us high school kids how good you really must be to play at the next level.
These D1 and D2 players jump out of the gym and started shooting drills and play different match scenarios at ease.
I had seen this before in New York when I got to visit St Johns College in Queens New York.

When I was 16, my dad and I arranged through a contact in Ireland to meet a coach in the school.  I got to watch a training session and meet some of the Division 1 players.

My eyes were opened.  Now getting to mix with these players gave me a new target to reach. I want to get to their level over the next year and work on my body during the summer of 2021. A big observation about American basketball is the way they play basketball here.  It is so different from Ireland.

High School basketball players are very athletic, everything is a million miles an hour and every play at the basket is above the rim.  When I played in Ireland Super League with UCD Marion, we had a more structured style to the play.
The difference between the American and Irish style is that in Ireland I generally knew when I was going to shoot and focused on that task.

In America I had to learn to go inside.  This has been tough to adjust to.  I plan to adjust, I will adjust. So, with all the training and adjustments there is one thing I can say to anyone coming to the states – ‘This is really hard, you have to want this.’

Preseason tournaments such as the ‘Icon Cuts’ tournaments give you an idea where you stand and where you need to get to.
Every Saturday over five weeks the tournament took place.  Our team won it out and it took me time to really get going.  I banked 14 points in the final game.

I was invited as a top 80 player in The Carolinas North and South camp and I also travelled to Myrtle Beech to play in the top 250 player’s camp.  My parents subscribe to watch these events online.  At the camps, the event organisers grade you and placed on a one of the 16 teams.

You play with players you never met before. They graded me as an unknown, as I was unknown. I was meant to be one of the weakest on my team.  I was a little better than what they graded me at. I managed over 20 points in some games.

I remember playing nine matches that weekend. I went over on my ankle which prevented me playing the tenth game.
School itself is not bad at all.  My High School is mixed and there are about 300 students.

I find the subjects easier than it is in Ireland, there is just not as much work as on the Irish curriculum, everything you do is very deliberate and little time is wasted.

I have 40 games coming up as the season kicks off in December.  The plan is to play in different tournaments throughout the school term and then into the summer.

Jamie's next blog will be in two weeks time.