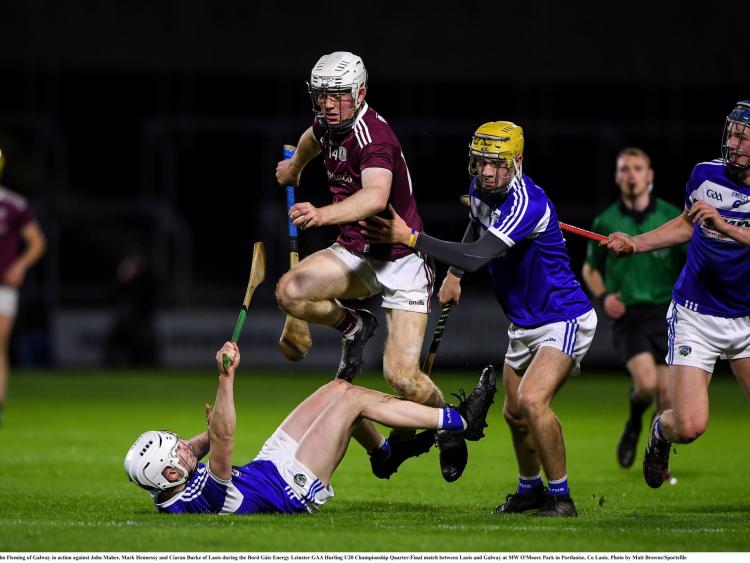 The Laois U-20 hurlers were never expected to beat a well-fancied Galway side coming into this clash in O'Moore Park, but they were probably hopeful of keeping it competitive. It was anything but that, unfortunately, as Galway ran out comfortable winners in a very one-sided affair.

Galway opened the scoring thanks to a close-range free from Donal O’Shea. It could have been worse than a point had Laois goalkeeper Cathal Dunne not pulled off an excellent save from Galway full-forward John Fleming, before the move was pulled back for the free.

Laois hit two early wides but were competing well in the opening stages of this contest in O’Moore Park. Donal O’Shea slotted over another simple free five minutes later to push Galway’s lead out to two points.

Laois got up and running in the eighth minute thanks to a lovely, curling effort from corner-forward Tomas Keyes after Laois managed to win their own puck-out. Galway’s O’Shea replied to put the Galway advantage back out to two, and Laois also lost corner-back Aaron Gaughan to injury in the process.

Galway got their goal a minute later as well, to compound Laois’ misery. Galway’s Sean Neary played in Donal O’Shea, and he finished exceptionally well into the bottom left corner of the goal, giving Cathal Dunne no chance in the Laois net.

Galway were playing with a lot of confidence now thanks to that early goal, and wing-back Diarmuid Kilcommins charged up the pitch to fire over their first point from open play. O’Shea placed over another placed ball, and Galway were 1-5 to 0-1 ahead inside the opening quarter.

After the water break, Galway continued to assert their dominance. Alex Connaire and Sean Neary sent over some superb points from distance, showing that it wasn’t just the Donal O’Shea show.

Laois finally returned to the scoreboard just after twenty minutes elapsed. Nice, swift play from first half substitute Fionn Holland and Ciaran Byrne resulted in a goal chance for James Duggan, but he was taken down just before he could get a shot away by Galway goalkeeper Darach Fahy. Camross man Daniel Delaney knocked over the straightforward free for Laois.

Laois were let off the hook a bit when O’Shea’s accuracy was a little wayward from frees and he missed two on the trot. Galway midfielder Alex Connaire did fire over the next score though, his second of the half. Connaire’s partner around the centre of the park, Ian McGuire, sent over an equally superb score a minute after.

However, the score of the game was possibly from Laois’ Fionn Holland. He managed to control a difficult, high ball in, and slap it over the bar without ever using his hand to control it. Galway responded ruthlessly though, with John Fleming and Donal O’Shea (free) adding to their lead.

Daniel Delaney’s free from distance was the last score of the half, as Laois trailed this fantastic Galway outfit 0-4 to 1-11 at the break.

Galway were on the front foot in the second-half from the throw-in, with wing-forward Conor Walsh driving over a fine score. A minute later and another fine, cross-field move resulted in wing-back Diarmuid Kilcommins sending over his second score of the affair.

Another delicate move resulted in Alex Connaire nailing his third point over the bar, and Galway were looking unstoppable. Laois did manage to get a score back through a Daniel Delaney free.

Galway grabbed goal number two in the 38th minute, as a beautiful little flick from Sean Neary allowed Alex Connaire to go one on one with Cathal Dunne, and the Laois keeper had no choice but to take him down. Donal O'Shea stepped up and dispatched the penalty.

Daniel Delaney tried to get a goal back in response for Laois, but his free was fired straight at Galway goalkeeper Darach Fahy. Good pressure from James Duggan though robbed Galway of possession coming out, and Delaney was allowed another opportunity to take his point from a free, which he duly did.

However, Laois were hit by a third Galway goal straight after. Midfielder Alex Connaire brushed off challenges running through the heart of the Laois defence, and flicked it into the net under pressure.

Galway were continuing to turn on the style as the game wore on, and were awarded another penalty after their full-forward John Fleming was hauled back in the square, and referee Thomas Gleeson dished out a red card to Laois full-back Enda Parlon.

After the second water break concluded, Laois keeper Cathal Dunne pulled off a magnificent save from Donal O'Shea, but Galway substitute was alert to flick in the rebound for Galway's fourth goal of the game.

O'Shea made amends for his miss by sending over his first point from play, before Laois midfielder Joe Phelan returned Laois to the scoreboard.

Clough-Ballacolla shotstopper Cathal Dunne was doing his best to keep the score down for Laois, as he pulled off another cracking save from Alex  Connaire

Galway finished the contest with scores from the hurls of Donal O'Shea (65'), Adrian Prendergast, Caimin Killeen, Jason O'Donoghue and Sean MacDonagh (x2) to round off a one-sided match.