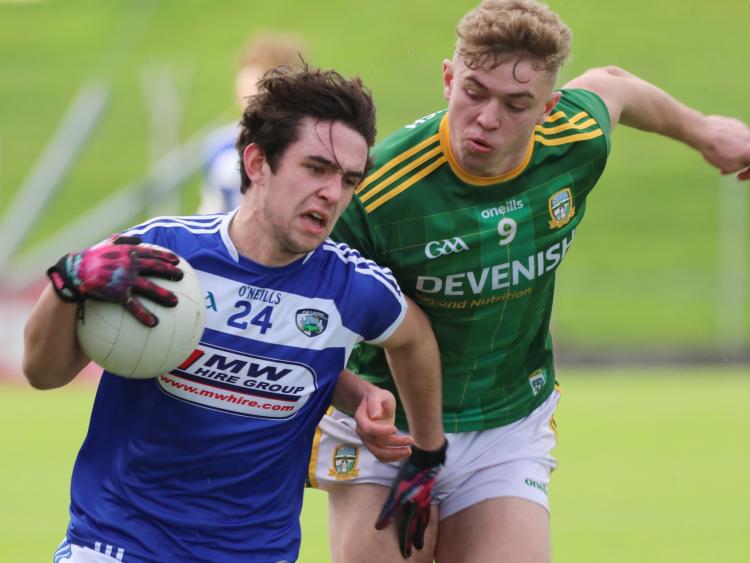 Laois are out of the Leinster Minor football championship after they were toppled by a superior Meath side in Navan early on Saturday afternoon.

The prize at stake was a Leinster minor football final but unfortunately for Laois, that was a bridge too far with two Meath goals in the second quarter of the game proving the major difference between the sides in the end.

Right from the throw in, Meath stamped their authority on the game with wing forward John McDonagh clipping over the first score of the game after just 20 seconds. Ruairi Kinsella doubled their lead a minute later and the home side were off to the dream start.

Laois settled though and and after an earlier wide, Colin Dunne kicked their opening score from a free to get them up and running. He added another on eight minutes as the sides were level on 0-2 each.

Laois then took the lead from Conor Kelly after he launched a super score over the bar from distance. That lead lasted two minutes. Mark Coffey messed up a guilt edge goal chance before Alan Bowden tapped over as Meath at least left the attack with a score.

They were two evenly matched sides in the opening half and excellent scores from Ross Meredith and Conor Kelly looked to sending Laois in leading at the water break only for a Meath free levelling it up at 0-5 each at the water break.

10 minutes after the water break and Laois were six points down. A poor kickout saw Meath gain possession and Liam Stafford sent a rasper to the net on 20 minutes.

Five minutes later and they had another. The Laois full back line had originally done well to keep them at bay but as the ball broke out on the ground from a scrum type situation, Alan Bowden was on hand to toe poke to the net to put them 2-5 to 0-5 ahead five minutes before the break.

They added another free but Colin Dunne did answer back for Laois with the last score of the half as Meath led 2-6 to 0-6 at half time.

The second half proved to be a very low scoring affair. Meath kicked things off in the early stages to move seven clear and although Colin Dunne replied with a free, Meath added two more to make it 2-10 to 0-7 with 16 minutes to go.

However, with the next attack and right before the second half water break, Laois struck for goal. Simon Fingleton and Oisin Hooney did very well in the build up before Kieran O'Donnell found the net to make it 2-10 to 1-7 at the water break.

There were no futher scores in the game. Both sides had chances but it was a poor closing quarter to a game that Laois will look back on and rue that second quarter where Meath found the net twice.