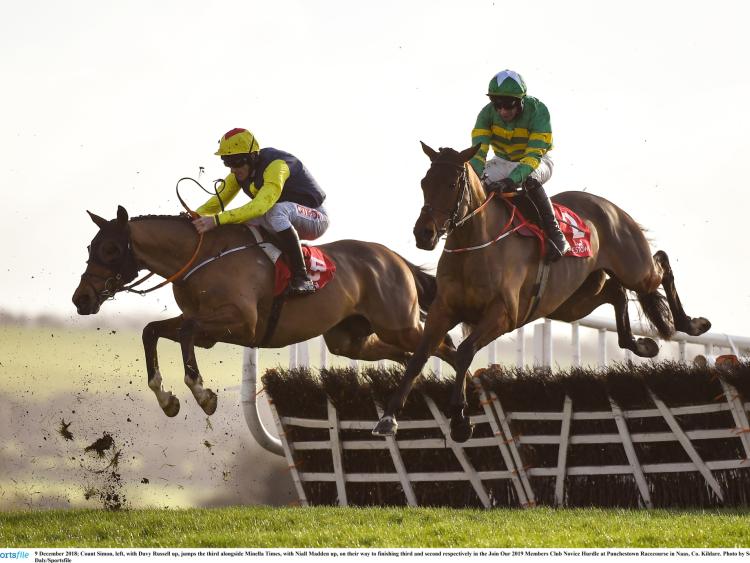 Minella Times (right) over hurdles at Punchestown in 2018

Little did we know that J.P.McManus’s Minella Times (Oscar-Triptoshen) would gallop to success in the Aintree Grand National  with the unstoppable Rachael Blackmore on board and trained by Henry De Bromhead.

It was a remarkable success breaking all records for achievements in racing that probably will never be beaten and will make racing even more international.

Minella Times also has a very strong connection with Kilbeggan races, having won the Irish Farmers Journal maiden hurdle there on 11th May 2018 with Mark Walsh on board at odds of 9/2.

He beat Willie Mullin’s horse Glorious Legend 16/1 and Jessica Harrington’s Holy One (1/2F) by 2 ¾ lengths. On 19th July 2019 Minella Times was second in a Beginners Chase in Kilbeggan at odds of 16/1 to Gordon Elliott’s Westland Row beaten by 3 ¾ lengths. It was an amazing price but the reason why is that Henry De Bromhead trained the favourite Eamon High ridden by Rachael Blackmore, who was 3rd. Even the best, get it wrong occasionally! Rachael rode Minella Times to success for the first time in Listowel on 25th September 2020 in a handicap chase,

There is another local connection to Minella Times in that the horse was bred by breeder Cathal Ennis just down the road from the course at Quill Farm, Castletown-Geoghegan. John Nallen bought Minella Times from Cathal Ennis at the Tattersalls Ireland November Sales in 2013 for €31,000. Around the same time, Nallen bought Gold Cup winner Minella Indo for €24,000 at Rathenty Stud.

A Gold Cup winner and Aintree Grand National winner for €55,000! Aside from Minella Times, Cathal Ennis also bred good horses like Identity Thief and he bought a mare named Papoose, whose last foal before the purchase was Ballabriggs who won the 2011 Grand National. He famously reared the brilliant mare Annie Power on Quill Farm, before she became a champion.