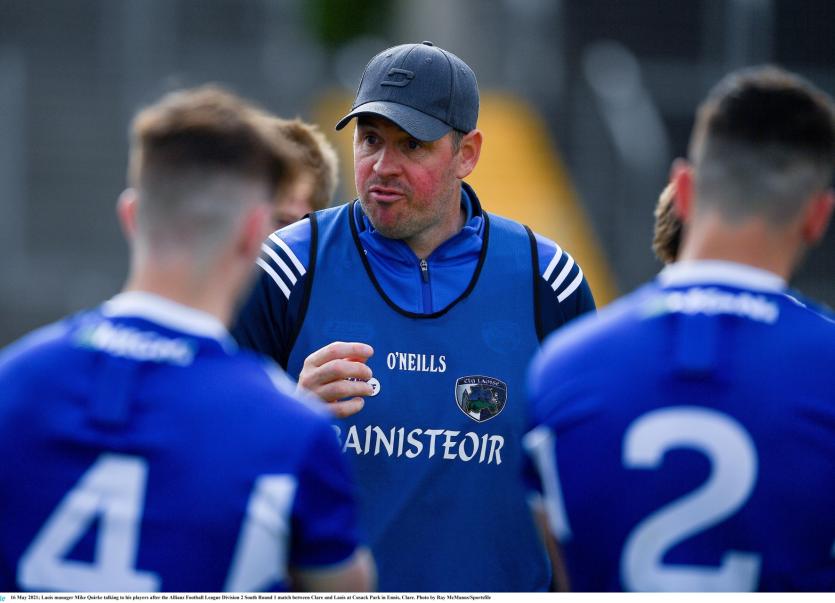 Laois manager Mike Quirke cut a frustrated figure in Ennis on Sunday. By all accounts Laois had been motoring well in the build up to the game but never got going as Clare easily swept them aside in the league opener on Sunday afternoon.

Quirke had but a big emphasis on performance and not so much worrying about the opposition so the lack of performance will sting for the Kerry man as Laois now face into a massive game with fellow first round losers, Cork on Saturday night in O'Moore Park.

"I wouldn't even classify it as a performance. We didn't get going at all. I'm not sure why we didn't play. Everything had being going in a direction that we were happy with that was just very disappointing obviously.

"I said to the players that I wasn't disappointed with them but I was disappointed for them because I know the huge work that they put into this since we were beaten by Dublin in last year's championship. Disappointed that they didn't get to show that in the positive way that we wanted."

"We started when we were supposed to start and we had about 11 sessions and one challenge game. Fellas were moving really well but it didn't just click on the day. It's not just the players, we will all have to have a look at what we did because whatever we did just didn't work today."

"There was no redeemable feature in that game for 75 minutes. Right now, I don't have the answers as to how that was."

It's back to the drawing board now for Laois but they haven't much time to sort out their problems as Cork travel to Portlaoise on Saturday night for a game that is a must win for both teams to keep alive their hopes of promotion.

"Last year there was so many games and it went loads of different ways but this is a very compressed league. Cork were beaten by Kildare as well so I'm sure they will be chomping at the bit to get a performance. For us, we just need to play better. It doesn't matter who you are playing, if you play like that, you won't win too many games."

There use of the ball is something that they will be focusing on this week in the lead up to the Cork game but for Mike Quirke, in the immediate aftermath of the game, the number one feeling was disappointment for the players.

"It's not fight or aggression. That gets overplayed. It's using the ball. We had the same amount of attacks as Clare had but we didn't score. We didn't do anything good enough with the ball.

"It was surprising to me that we played like that. They put in a huge shift on their own through 182 days of misery with Covid and you just wanted them to go and enjoy the experience and show what they can do but that wasn't enjoyable for anybody.

"We used 22 players and there wouldn't be too many that could say they were happy with their performance."