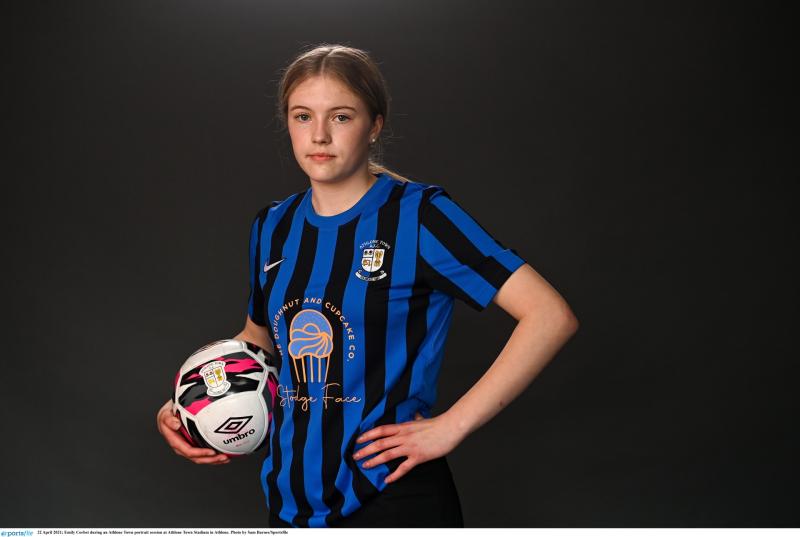 Laois teenager Emily Corbet has received a call up to the Ireland U19 Women's soccer squad having impressed selectors with her performances for Athlone Town this season.

The dynamic midfielder will form part of the squad for two upcoming friendlies against Northern Ireland on Wednesday June 9 and again on Friday June 11.

Clonaslee native Corbet has previously represented Ireland at U17 level and is currently plying her trade with Athlone Town in the Women's National League and has played eight games for the Westmeath club gaining 305 minutes of game time.

The younger sister of Laois senior football goalkeeper Niall Corbet who has also played soccer at a high level with Bohemians, Waterford and UCD, Corbet will be hoping for game time this week to further enhance her reputation as an attacking midfielder.

The Girls in Green will act as hosts for the first game on Wednesday, June 9th in Dublin before travelling up to Belfast for the second fixture on Friday, June 11th.

For Head Coach Dave Connell, this is a welcome return to action even if it is the first time that he, and his staff, will be working with this particular group of players.

The games are needed, however, as the WU19s have the 2021/22 UEFA Women’s Under-19 European Championships circled on their calendars with qualifiers against England, Northern Ireland and Switzerland to come later this year.

Connell said: “It’s great to be able to get back working with a squad again after such a long time. We all fully understand why underage international football had to be suspended with a global pandemic affecting people’s lives – so we won’t take this opportunity for granted and will continue to follow all of the recommended protocols.

“For these two games, we have a chance to work with a group of talented players in what should be two good tests against Northern Ireland. The aim is to identify the players who will be part of our squad when we start our EURO Qualifying campaign in October.

“We are looking forward to getting back onto the pitch and working towards the goal of qualifying for the European Championships in Czech Republic. There is a lot of work to be done to achieve that but we’re ready to get going.”

There is also two Offaly women in the squad with Ciara Glackin named as one of the goalkeepers while Rebecca Watkins is part of the panel as one of the attacking options.