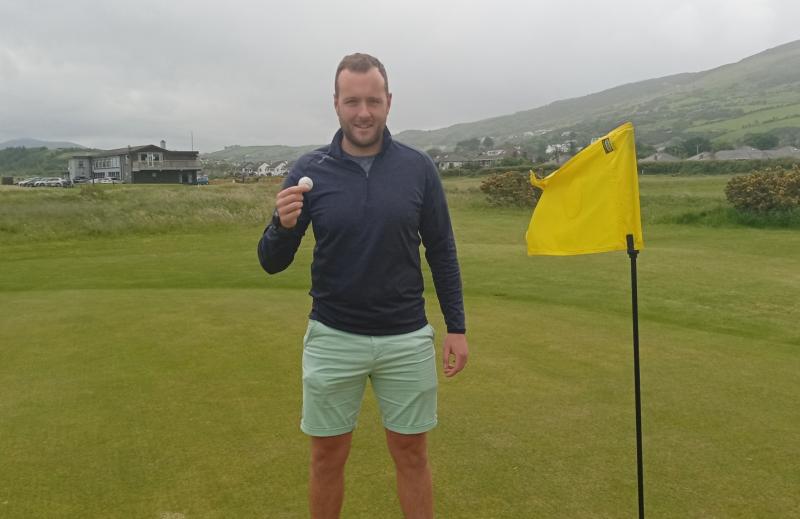 RARE: Buncrana native Kevin Treacy who landed the albatross at the North West Golf Club on the outskirts of Buncrana this week.

A keen amateur golfer from Donegal defied odds of six-MILLION-to-one this week to land a jaw-dropping albatross at his local club.

The stunned 27-year-old says he is still in shock after finishing his round, played last Thursday, with such an audacious flourish.

The 18-handicapper told Donegal Live: "I drove off from the 18th tee and landed nicely on the fairway. I used a range finder app to work out I was 168 yards from the pin, but the word 'albatross' never even crossed my mind.

"All that was in my head when I made that second shot with my nine-iron was 'get it on the green'. I didn't actually see the ball go into the hole, just heading towards it, and when I got up to there, I assumed it had rolled off the back.

"But one of the guys I was playing with, Luke Bradley, called over to me, 'it's in the hole', and I couldn't believe it. I looked it up and the odds are six-million-to-one.

"I was just hoping to get a birdie, to be honest; I've never even got an eagle before."

Kevin, who lives in Clonmany and works as a special needs assistant at Scoil Iosagain in Buncrana, also runs 'Move2gether', a fitness training resource designed for people with additional needs.

"I have work and then gym sessions after school," he said, "so I don't get out golfing very often. I think I've played three, maybe four rounds since I joined North West.

"I'm still buzzing. It's probably the best thing I'll ever do in golf. One of my friends has started calling me 'Mr Albatross'!"