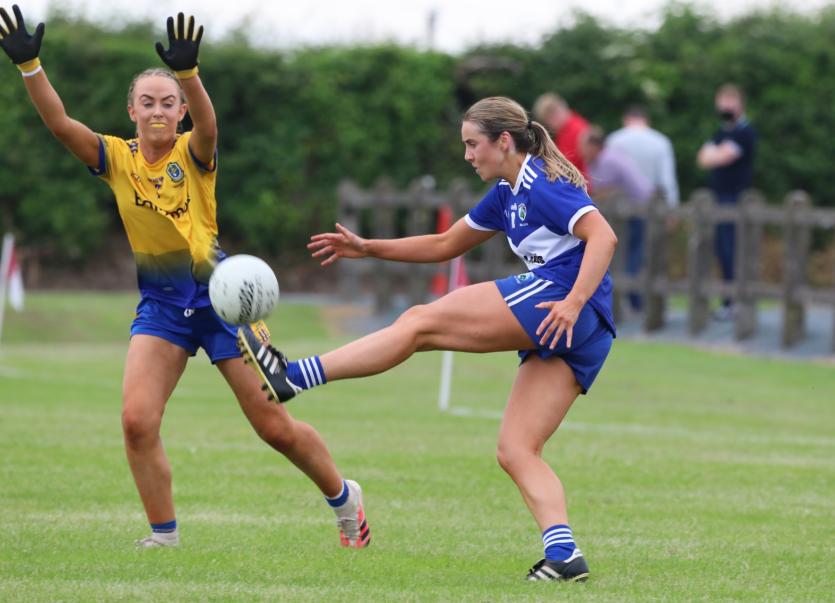 Laois came from seven points down at the second water break to record an impressive victory over Roscommon in the Division 3 ladies football league semi-final in Tang Co. Westmeath on Sunday afternoon. They looked dead and buried with 12 minutes remaining, but they somehow managed to turn it around, winning comfortably by four points in the end, in an extremely entertaining game.

Played under dead heat, it was Roscommon who coped with conditions the better in the early exchanges and started the brightest and just one minute in, they almost rattled the net. Róisin Wynne found herself through on goal but she was denied by an excellent Eimear Barry save in the Laois goal. Almost immediately after, Roscommon registered the first score of the day when Rebecca Finan converted a free.

Laois settled the ship and four minutes later, they got off the mark themselves through the excellent Mo Nerney. Moments later, Laois found the net. Laura Nerney made a piercing run at the Roscommon defence, but ran into traffic 21 yards out. She turned and recycled to Anna Healy and Healy’s attempt at a point dropped short and dropped in over the head of Helena Cummins to gift Laois a goal.

It was a half of goals, with five in total. Roscommon raised their first green flag of the day when an Eimear Barry misplaced kick out fell into the hands of Joanne Cregg who raced through and buried the ball to the back of the net.

Mo Nerney’s two frees kept Laois ahead before Roscommon had their second goal of the game. Jenny Higgins found Laura Fleming in space in front of goal and the Clann na Gael midfielder made no mistake in finding the net. A Rebecca Finan free gave Roscommon a two-point lead at the first water break after a hectic opening quarter.

There was no let up in the goals department in the second quarter and from the resumption of play, Anna Healy broke at pace, laid it to Erone Fitzpatrick and she found the net to give Laois their second goal of the game.

Finan responded for Roscommon, but it was the Laois ladies who got the final scores of the half, a goal from Mo Nerney with a low, tidy finish and points from Leah Tarpey and Erone Fitzpatrick gave them a 3-05 to 2-04 lead at half time.

Laois opened the second half scoring through Leah Tarpey, but it would prove to be only one of two scores for Laois in the third quarter as Roscommon took control of the game.

Jenny Higgins’ influence grew on the game, and six minutes into the second half, her neat cross field ball found Aisling Hanly who palmed the ball to the net past a helpless Barry in the Laois goal. Mikaela McHugh added further points before Natalie McHugh found herself on the end of a well worked move from Roscommon and she raised the green flag.

Higgins was on hand again to provide another assist, this time to Laura Fleming who found the net for Roscommon’s fifth goal of the game, and to leave Roscommon cruising with a 5-08 to 3-07 lead at the second water break.

Laois looked dead and buried at the second water break, but momentum completely swung their way. They needed a quick start to cut the deficit and they got just what they needed when Eva Galvin darted towards the Roscommon defence and slipped to Nerney who slotted it home to cut the deficit to four.

Two Nerney frees, an Orla Hennessy point and an Ellen Healy point off the crossbar levelled the contest with just two minutes to play.

Laois continued the storm and further points from Erone Fitzpatrick, Laura Nerney, Anna Healy and substitute Aoife Kirrane powered Laois to quite a remarkable victory on a scoreline of 4-15 to 5-08.