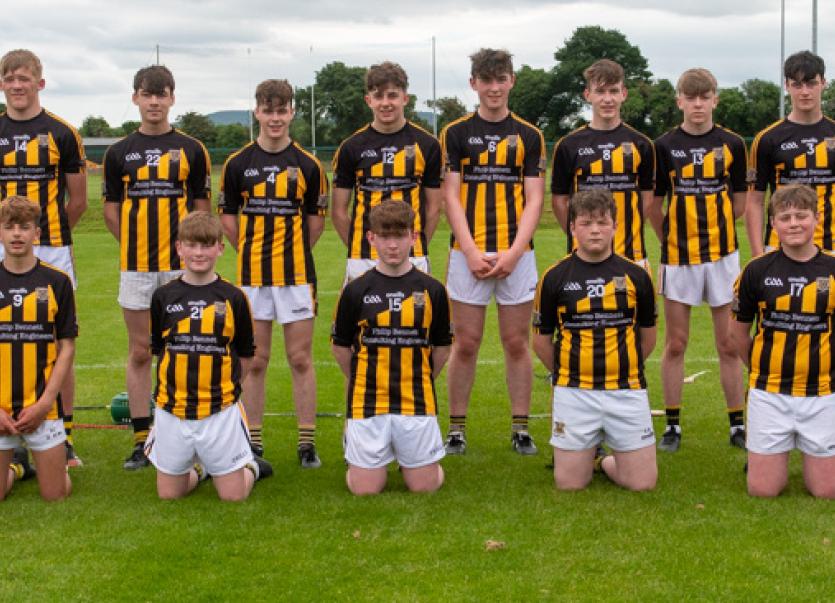 After qualifying for this final all the way back in October of last year, Camross and Clough-Ballacolla finally got the chance to lock horns in the 2020 U-15 ‘A’ Championship final. The game certainly did not disappoint, as there was some quality hurling on display from both sides in the Centre of Excellence in Portlaoise.

Both Camross and Clough-Ballacolla met in the group stage of this competition previously, with Camross running out comfortable winners in the opener with twelve points to spare. They went on to top Group B quite easily, thanks to big wins over Abbeyleix and Castletown.

Clough-Ballacolla bounced back in style from that opening round defeat by scoring 4-20 against Castletown in their win, and they then made sure they advanced through to the semi-finals stage thanks to a ten-point victory over Abbeyleix.

Camross had no issues in reaching the final, as they breezed through their semi-final opponents Borris-Kilcotton, racking up 3-21 along the way. Clough-Ballacolla, on the other hand, did not have it all their own way as The Harps pushed them hard in their semi-final bout. However, Clough-Ballacolla did win out in the end on a score of 2-11 to 1-9 to advance and get another crack at Camross.

The boys wearing black and amber settled the quicker in this one as Camross centre-forward Ben Deegan sent two frees flying over the bar. Eoin Duggan opened Clough-Ballacolla’s account for the game with a nicely taken point from play to halve the early deficit.

Eoghan Cuddy would wreak havoc for the Clough-Ballacolla defence all day long, and he fired over an excellent score to put Camross two to the good again. Thomas Brennan replied for Clough-Ballacolla, but Camross fired in the first of their five goals to stamp their authority early.

Kevin Byrne was another forward that Clough-Ballacolla just found too hot to handle on the day. Byrne darted his way past through numerous challenges, showing a strong burst of pace on the way through, before rifling one into the back of the net.

Clough-Ballacolla’s Thomas Brennan kept his side in touch early on, as he pointed twice in the space of a couple of minutes. Eoghan Cuddy and Ben Deegan registered scores for Camross, but an Eoghan Duggan point meant Clough-Ballacolla were only trailing by three as we approached the first water break.

Clough-Ballacolla’s chances were dealt a serious blow when Joe Pearson received his marching orders by Anthony Stapleton for striking out at a Camross player. The loss of Pearson and being a man down almost seemed to galvanise the Clough-Ballacolla troops though, and they knocked over seven points on the trot to take their first lead of the contest.

Thomas Brennan, Cormac Hogan, Evan Cassin and Eoghan Duggan all landed scores, while Kevin Hyland placed over three scores himself, as Camross seemed stunned during this period of play.

Camross found their rhythm again just before half-time though, as they scored 1-2 to regain the initiative. Eoghan Cuddy and Ben Deegan both pointed before Cuddy found the back of the Clough-Ballacolla net with a neat finish past Peter Rafter in goals.

Camross led 1-8 to 0-8 at half-time, but Clough-Ballacolla really made them sweat in that first half despite being a man down. However, the second half was a different story with Clough-Ballacolla feeling the fatigue of only having 12 players, and Camross put on a show.

Eoghan Cuddy kept his foot on the pedal, as he scored his second goal of the game with another brilliant finish. Cuddy curled over two more points, while Kevin Byrne and Ben Deegan stretched the lead out even further.

Clough-Ballacolla kept plugging away, with two points from Kevin Hyland before the water break giving them a fighting chance heading into the last fifteen minutes.

Clough-Ballacolla needed goals though, but unfortunately the goals scored were down the wrong end for them. Kevin Byrne rounded off his day by completing his hat-trick, while Shane Higgins and Ben Deegan also got their names on the scoresheet.

Cormac Hogan registered Clough-Ballacolla’s last score of the match, but the loss of Joe Pearson just proved too tough to handle for them in that second-half. However, Camross were more than deserving winners and have plenty of lads that will surely star for Laois underage teams in the future.