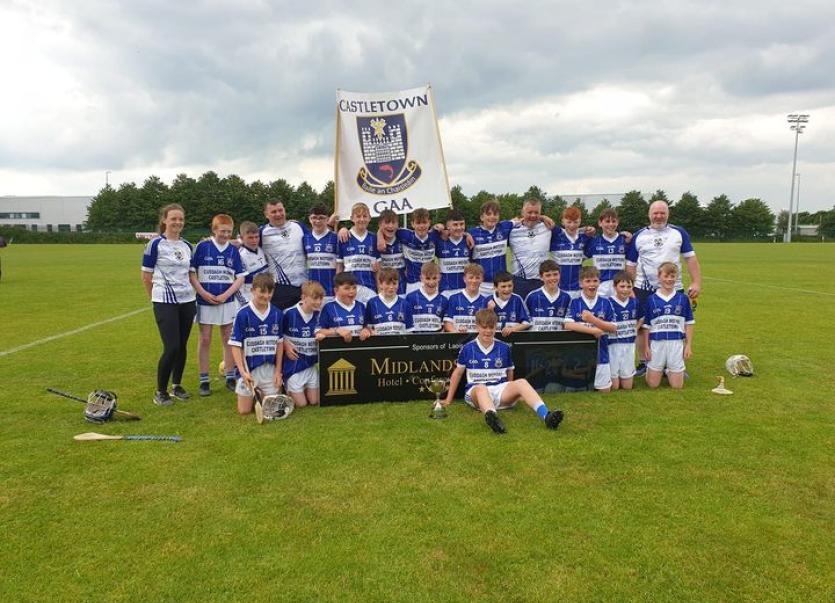 They say goals win matches and that was absolutely the case in the Centre of Excellence on Sunday morning. Castletown’s U-13’s found the back of the net three times to defeat Clough-Ballacolla in a hard-fought contest where the final score didn’t accurately reflect how well the losers actually played.

Clough-Ballacolla began the brighter, as they looked to take advantage of the slight breeze they were playing into. They almost struck for an early goal, as Eoin Duggan delivered a rasping effort that thundered off the post, and Ben Holohan could not steer the rebound home either.

However, Clough-Ballacolla found their groove from range and went up four points in the opening stages. CJ Brennan played a nice ball from a free into Eoin Duggan, who turned sharply and fired over. Colm Brennan added another from a 65’, before Duggan raised two more white flags from play as he put his stamp on the game.

However, Castletown snatched a goal back and that gave them the confidence boost to take the lead. Daniel Whelan picked out his fellow forward Tom Og Phelan, who buried a shot into the top right corner of the goals.

Soon after the first went in, goal number two arrived for Castletown. Daniel Whelan looked to have been bodied up with nowhere to go, but he somehow managed to get an effort off that crashed the back of the Clough-Ballacolla net.

Tommy Goode then marched up the field to send over a super score from distance, and Castletown led 2-1 to 0-4 as the first water break was whistled for.

Clough-Ballacolla returned to the scoreboard after play resumed, as John Coonan curled over an excellent effort from out near the sideline. Castletown had found their rhythm though, and two converted frees from Ryan O’Connor and a point from play from Tom Og Phelan meant they went in with a healthy 2-4 to 0-5 lead at half-time.

Ryan O’Connor nailed another free to kick-start the second half for Castletown, before Eoin Dugan responded with a free of his own for Clough-Ballacolla to bring back the deficit to five points.

Clough-Ballacolla hit plenty of costly wides in the second half, while Castletown were far more efficient in front of goals. A brilliant score from Castletown wing-back Liam Guilfoyle was followed by another O’Connor free.

Clough-Ballacolla replied through points from John Coonan and CJ Brennan (free), but Castletown kept their foot on the pedal. A Kyron Cuddy score from close-range was followed by goal number three, as Kyron Cuddy hit the back of the net again.

The sides exchanged points throughout the rest of the half, as Clough-Ballacolla just could not find a way through a resilient Castletown rear guard. Castletown finished comfortable winners by ten points.