Stradbally come out on top over Portlaoise Rovers 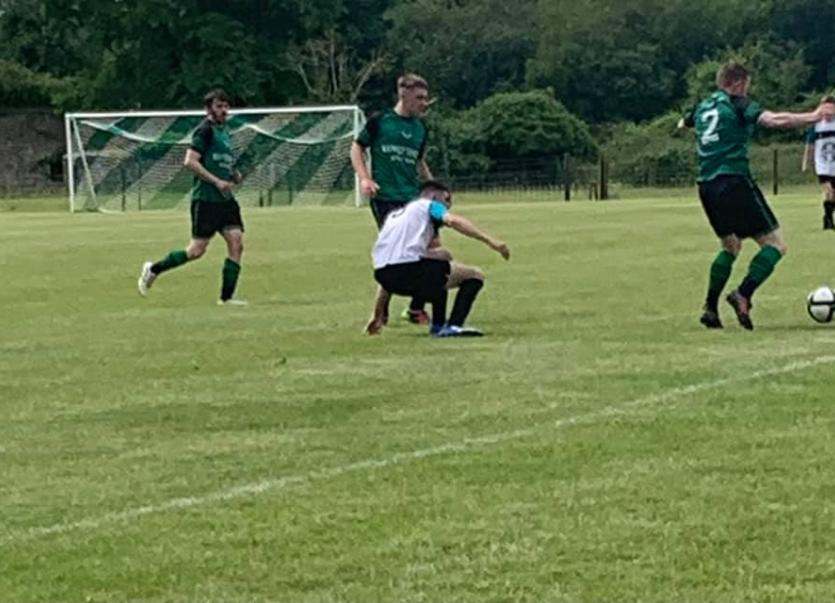 Both Stradbally Town ‘A’ and Portlaoise Rovers came into this clash on the back of winning their previous group games, and both were full of confidence. It was the home side though who picked up the points on offer, with Garry Comerford, the former League of Ireland player, running the show for Stradbally Town.

The first half was, by and large, a competitive enough contest. The hosts did have the opening chance though, as Justin Lalor slid in Benny Lawlor who crossed It across the square to Finn Maher, and he failed to get the touch required to place it in the back of the net.

Stradbally Town had another chance minutes later, as Keelan Barry crossed one into big Finn Maher again, but he could not garner the power on his glancing header to trouble Colin Fitzpatrick in the Portlaoise Rovers net. Rovers had their first sight of goal after, as brilliant running from Will Boland resulted in Aaron Keane getting an opportunity inside the box, but he mis-timed his kick.

Stradbally Town had numerous opportunities to go in front in the next ten minutes, but Portlaoise Rovers somehow managed to keep the ball out of their net. First Liam Clancy saw his effort cleared off the line by Gavin Cooper, and then the other full-back for Portlaoise Rovers, Ronan Corr, cleared Garry Comerford’s chance from a corner.
Colin Fitzpatrick kept out another effort from Stradbally Town, as the Portlaoise Rovers number one got down well to save Benny Lawlor’s low shot.

Stradbally Town did finally get their reward though with just a few minutes to go until half-time. Garry Comerford’s curling cross was met by first half substitute Cillian Maher, who placed it into the corner.

Portlaoise Rovers were one-nil down at half-time but still well in the game. After the restart they had a few half-chances but failed to work Robbie Moore in the Stradbally Town goals early on.

However, Portlaoise Rovers had a golden opportunity that they would regret taking around ten minutes into the second half. Stradbally Town got a bit complacent with their passing, and Portlaoise Rovers’ Will Boland pressed centre-back Noel Delaney into losing possession. Boland strongly shouldered off the challenge and went through one-on-one but skied the effort well wide.

That was the wakeup call Stradbally Town required to kick themselves into another gear. Garry Comerford went on a marauding run through the middle of the park, played through Benny Lawlor, who unselfishly squared it back to Comerford and he tapped it into an empty net.

Not long after the second went in, the third goal arrived for Stradbally Town. Full-back Aaron Wright took a throw-in and found Comerford. There appeared to be no danger on, but the former Cork City player unleashed a rocket of a shot that went past Colin Fitzpatrick and into the net.

Comerford completed his hat-trick with around fifteen minutes of play left. A sloppy backpass from Portlaoise Rovers was latched onto by Comerford, who rounded Fitzpatrick and calmly slotted home.

Portlaoise Rovers, to their credit, finished strongly and managed to grab a consolation goal towards the end. David Nolan was pushed down inside the box, and Brian Smith buried the penalty.