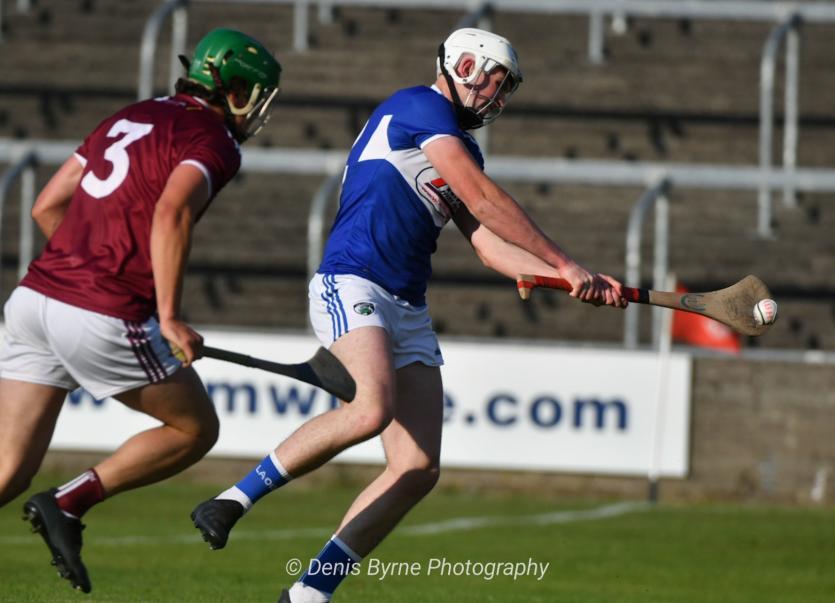 Up by twelve points at half-time, it appeared that Laois U-20’s were on course to cruise into the next round over Westmeath. However, the Lake County showed heart and grit to turn it around in an epic second half performance that meant extra-time was required in Portlaoise.

Both traded blows in extra-time, but crucially it was the Laois men who struck the final knockout. Tadgh Cuddy knocked over five straight points to ensure that the Laois U-20 squad were kept alive in this year’s Leinster championship.

Westmeath struck first in O’Moore Park, as Eamonn Cunneen played through Owen McCabe in on goals, but McCabe settled for a point when the goal was gaping. Laois punished this lack of ruthlessness from Westmeath down the opposite end, as full-forward and captain Mark Hennessy played in the onrushing Gearoid Lynch who buried it into the bottom left.

Things went from good to great for the Laois men then, as goal number two arrived shortly after. Corner-forward James Duggan was delivered the ball in close to the square, and he steadied himself before lashing one into the opposite corner that the first one went in.

Gearoid Lynch, Ciaran Byrne and James Duggan all raised white flags then for Laois and all these scores came from play. Westmeath responded through a point from their full-forward, Jack Gillen, but Laois were then awarded their first free close to gaols and that was converted by Tadgh Cuddy from Castletown.

Eamonn Cunneen converted a free for Westmeath but Laois replied ferociously with the next three scores. Thep Fitzpatrick, Ciaran Burke and Gearoid Lynch all landed some sublime points from play.

There was not much between the sides for the next five minutes, as Laois pointed four times to Westmeath’s in a free-flowing affair. Thep Fitzpatrick, James Duggan (x2) and Mark Hennessy all hit over points for Laois before the water break was whistled for.

Westmeath fired over two points after playing reconvened, with Eamonn Cunneen and Jack Gillen raising a white flag each. Laois replied down the other end, as James Duggan split the posts again at his ease after a long ball was sent in by midfielder Thep Fitzpatrick.

Mark Cunningham curled over a score for Westmeath, but Laois hit another three on the trot to go further in front. Ciaran Byrne, Tomas Keyes and Tadgh Cuddy (free) found the target for them, as the O’Moore County showed they can point from anywhere on the field with a range of scores.

Ciaran Byrne and Tomas Keyes converted further efforts for Laois before half-time, while Westmeath pointed twice themselves. Laois were firing on all cylinders up front, and they led 2-17 to 0-11 at the break after a fine display of hurling.

The start of the second half was a whirlwind as well, as this contest did not look like slowing down anytime soon. Laois corner-forward James Duggan judged the flight of a ball in perfectly, as the Westmeath marker overcommitted himself and Duggan proceeded to fire a rocket into the top of the net.

However, Westmeath went straight down the other end to grab their first goal of the game. Josh Coll, who was moved from midfield to full-forward for the second half, was played through and made no mistake with the finish.

Westmeath’s Luke Moore and Laois’ Thep Fitzpatrick exchanged points before Westmeath showed signs of life by stringing together four unanswered points. Captain Jack Gillen grabbed three of these, with two coming from play, while Eamonn Cunneen scored the other.

Tadgh Cuddy steadied that mini-storm slightly by placing over a close-range free, but Westmeath maintained their momentum thanks to another Jack Gillen point, this time coming in the form of a 65’.

Wing-forward David Devine scored another for Westmeath, and they were back to within just seven points despite trailing by twelve at the interval. Laois hit two wides before the second water break was blown for, as they led by 3-19 to 1-18.

Laois struck first after the water break concluded, with Ciaran Byrne finding the target on the run. Westmeath went on another run after that though, sending another four points without reply on the scoreboard. Jack Gillen (two frees), Eamonn Cunneen and Shane Williams sent over scores to cut the deficit to just four.

Ciaran Byrne replied for Laois after a nice pass from James Duggan, but Westmeath had all the momentum now and they went in front for the first time since the opening seconds of the match. Substitute Pearce Weir Norris, Eamonn Cunneen (free) and Josh Coll raised white flags, before Coll fired in a goal after a strong run from the half-way line.

Laois showed their character then to respond with a goal of their own to retake the initiative with just minutes left. Gearoid Lynch got his hand on a long ball sent into the square, and James Duggan was on hand to finish to the net for his hat-trick.

However, further drama unfolded in O’Moore Park. Jack Gillen got a free awarded just outside the square, and instead of settling for a point, he blasted it into the back of the net to give Westmeath the lead by the minimum.

Laois were allowed one more venture forward, and fortunately received a free themselves. With usual free taker Tadgh Cuddy already subbed off earlier, it was up to Tomas Keyes to step up and place it over the bar. The Camross man held his nerve to send this pulsating affair to extra-time.

Laois struck the front at the start of extra-time, with Keyes converting another free. However, that lead was evaporated almost instantaneously, as Owen McCabe flicked it into the net for Westmeath.

Luke Moore added on another point for Westmeath, and they had a three-point cushion. Laois landed two points though before the half-time of extra-time, with Keyes knocking over another two scores.

Keyes levelled proceedings after the break, and further scores from Mark Hennessy and James Duggan meant Laois were now two ahead. Westmeath cut the gap to the minimum thanks to Eamonn Cunneen, but Tadgh Cuddy, who was brought back on after being subbed off earlier, fired over five straight points to win an epic one for the O’Moore men.