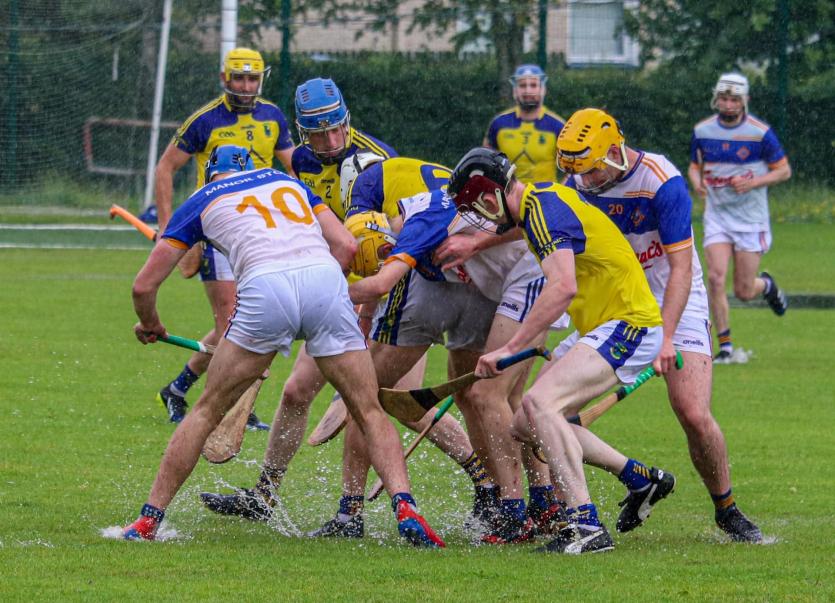 Abbeyleix secured a place in the semi final of the Laois Hurling League with a comprehensive victory over Clough Ballacolla today, with the latter now facing a relegation play off.

Played under horrendous conditions, Abbeyleix laid the foundations in the first half when they took a six-point lead in at half time, to leave the game effectively over as a contest, mainly due to the adverse weather conditions, and which they pushed on from in the second half.

They probably should have had a greater lead at half time, but for a string of saves from Cathal Dunne in the Clough Ballacolla goals, however it wasn’t enough as Clough Ballacolla succumbed to a heavy defeat at the hands of Abbeyleix.

The opening exchanges were hotly contested, and it was Clough Ballacolla who started the brightest. Jordan Walsh grabbed the opener and moments later, Walsh pointed a free again with the home side dominating early on.

However, the tables soon turned as Abbeyleix took control of the game, as the weather conditions deteriorated. Jake Cranny, Liam Delaney and Declan Phelan all pointed for the Abbeyleix men as the rain pelted down.

Clough Ballacolla did have their chances, but they hit numerous wides in the first half, wasting many opportunities to pull themselves back into the game which allowed Abbeyleix to build up a healthy seven point lead at the half time break, with Abbeyleix mainly ahead courtesy of the placed ball accuracy of Aaron Brennan.

As the rain continued to pelt down on the Ballacolla pitch, it led to the formation of several puddles around the field, with both sides struggling to cope with the underfoot conditions. Aidan Corby fired over a well needed Clough Ballacolla point to reduce the deficit to six, as the constant rain played havoc on both the conditions of the pitch and the standard of play.

However, Abbeyleix resumed order as Brennan, Colm Walsh and Mark Cahill all raised white flags to increase Abbeyleix’s lead. It was point for point in the third quarter until the only goal of the game killed the game as a contest.

Colm Walsh got on the end of a loose ball and he found Jake Cranny who pulled on the ball across to Brennan. Brennan then pulled on the ball again as Dunne was finally beaten in the Clough-Ballacolla goals after a string of impressive saves, especially in the first half as Abbeyleix looked to capitalise on an out of sorts Clough Ballacolla team.

Clough Ballacolla resorted to route one hurling as they put ball after ball on top of their full forward line but it was Brennan at the other end who once again added to his tally to power Abbeyleix to a 12 point win and deservedly book their place into the semi-final of the league, running out 1-17 to 0-08 winners in the end.