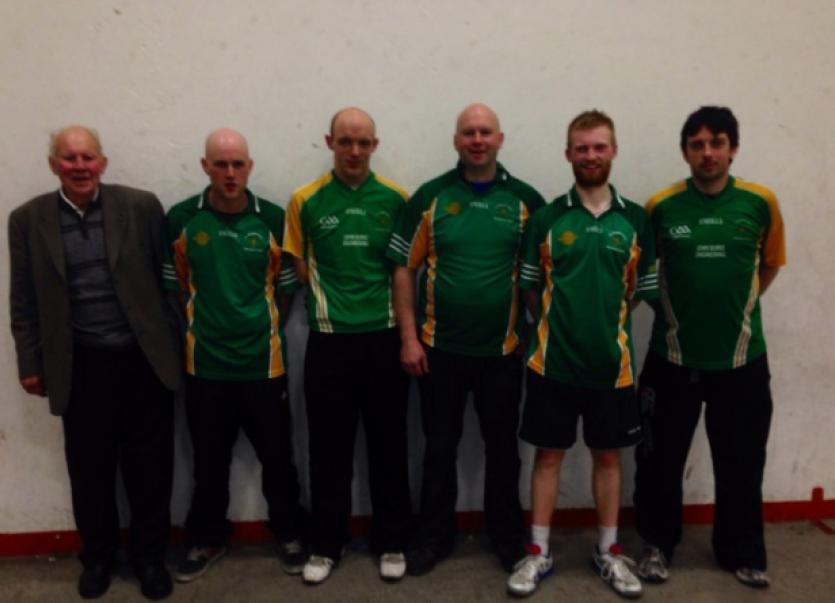 St Brigid’s Handball Club, Monavea are celebrating their first ever Leinster 60x30 club title after hard fought victories over Kilmyshall of Wexford and Kells of Meath.

St Brigid’s Handball Club, Monavea are celebrating their first ever Leinster 60x30 club title after hard fought victories over Kilmyshall of Wexford and Kells of Meath.

In their semi-final encounter against Kilmyshall, Monavea recorded an impressive 124-86 ace victory. Michael Donovan gave the Laois club a slender lead with a 21-20 21-17 win in the first singles.

Andrew Dowling and Ray Fogarty put Monavea in a dominant position going into the last singles after an impressive 21-7 21-9 victory. Tómas Lennon was to finish the job for Monavea, recovering from losing the first game 19-21 to win the second 21-12.

In the final, Monavea faced a highly fancied Kells team who had the All-Ireland minor hardball champion Evan Sheridan in their ranks. First into the alley for Monavea was Peter Whelan.

After a slow start, Whelan finally found his form to record a 21-20 21-16 win to give Monavea a five ace lead. Ray Fogarty and Tómas Lennon were to find themselves up against two very strong opponents in the doubles eventually losing out 21-20 21-6.

This left Monavea trailing by 10 aces going into the last singles. Michael Donovan showed great composure despite the pressure and won his first game 21-14. This left Monavea now only three aces behind with one game to play.

The Kells team did not give up easily and Michael found himself trailing 12-7 early in the deciding game. Listening to the advice of team coach Jimmy Fogarty, Michael changed his serve to good affect and won the second game on a scoreline of 21-15.

This result gave Monavea a narrow 110-107 ace victory and with it the Leinster Junior B Club title. The club now progresses to the All-Ireland finals to be played the weekend of July 11/12th.