Scoil Chríost Rí lose out to strong Galway side in final 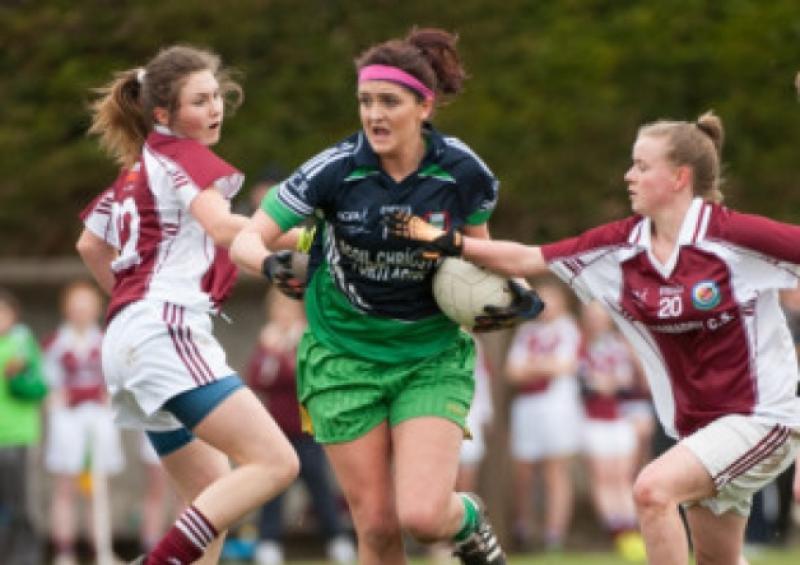 Despite the best efforts of a talented Scoil Chríost Rí side, Glenamady CS claimed the All Ireland PP Schools Senior Football B title in Tuberclair last Saturday afternoon.

Despite the best efforts of a talented Scoil Chríost Rí side, Glenamady CS claimed the All Ireland PP Schools Senior Football B title in Tuberclair last Saturday afternoon.

Talented corner-forward Mary Fahy scored all four of the Galway side’s goals with twins Nicola and Louise Ward each putting in outstanding displays in midfield. That trio were the difference on the day as their side built a 3-10 to 0-5 lead before pushing on to victory in the second-half.

Scoil Chríost Rí never threw in the towel but despite battling to the final minute, they just came up against a better side on the day. Aine Fitzpatrick led the line tirelessly all day while Fiona Dooley ran herself to a standstill in midfield. Scoil Chríost Rí were under pressure at the back throughout the game but all the defenders worked tirelessly with Anna Healy in particular to the fore.

Two of Glenamady’s three first-half goals came late in the half and took the game away from Scoil Chríost Rí although they gave themselves a hint of chance with Aine Fitzpatrick found the back of the net shortly after the restart. Unfortunately they couldn’t build on that score as their opponents kept the scoreboard ticking over.

However despite the defeat, Scoil Chríost Rí should be proud of what they have achieved this year. Just 12 months ago, they claimed the All Ireland C title and to win the Leinster B Final and reach another All Ireland Final is a remarkable achievement.

Glenamady hit the ground running and a point apiece from their midfield partnership of Nicola and Louise Ward put them into an early lead.

Aine Fitzpatrick opened Scoil Chríost Rí’s account with two minutes on the clock but they were rocked back soon after when the Ward sisters combined to open up their defence before putting Mary Fahy through on goal and she made no mistake with a close range finish.

She added two points soon after but Scoil Chríost Rí kept in touch with points from Orla Carroll and a free from captain Aine Fitzpatrick.

Another point from the captain reduced the gap to three with 14 minutes on the clock however the remainder of the half was dominated by the Galway side as they built an unassailable lead.

Points from Caroline Geraghty, Amy Mee and two apiece from Louise Ward and Nicola Ward opened the gap to nine after 26 minutes before the ever dangerous Mary Fahy struck for her second goal.

Scoil Chríost Rí came close to hitting back with a goal of their own but Anna Fitzgerald was denied from close range. Orla Carroll scored her second point of the half a minute before the break but that was not the last score of the half as Fahy completed her hat-trick before the break again giving Scoil Chríost Rí ‘keeper Fiona Kelly no chance from close range.

Scoil Chríost Rí came out strongly after half-time and a goal after just 30 seconds from Aine Fitzpatrick gave their large travelling support something to cheer about and after two Glenamady points, she put over anotherten minutes into the second-half.

However Glenamady soon regained control with eight of the next nine points with a free from Aine Fitzpatrick being Scoil Chríost Rí’s only response.

Nine minutes from time a brilliant run by the excellent Fiona Dooley split the Glenamady defence and the midfielder kept her composure to apply the finish to the back of the net. Glenamady however responded in kind with Mary Fahy scoring her fourth goal.

The sides exchanged a point apiece late in the game with the opposing number 15s, Rachel Cross and Ailish Morrissey adding a point apiece before referee Des McEnery blew the full-time whistle.