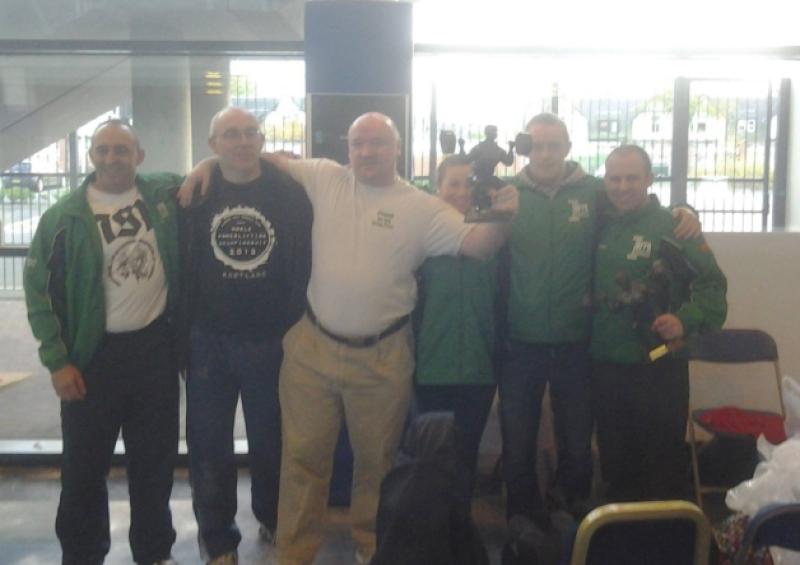 The Irish team took first place ahead of England and Scotland to claim a famous win on foreign soil.

Captain Cuddihy was among the lifters who came home as a World Champion leading by example as numerous Irish and World Records were broken.

More than fifty Irish lifters competed in the event with many of them taking second and third place in their weight group to add more (points to Irelands tally. Eventually Ireland came through with 278 to 273 points to beat England in the team event. An unprecedented and momentous win against (the home teams of England and Scotland.

The USA came fourth. 14 countries from as far apart as Canada and the Ukraine took part in the competition. Drug testing was conducted at the competition in accordance with World Anti-Doping Agency (WADA) standards.

“It was a great competition for us and there were some outstanding individual performances that eventually delivered the team win,” said Tom Coyle president of the Irish Drug Free Powerlifting Association (IDFPA). “To win best team against such opposition is an outstanding achievement.”

Already in April of this year at the European Championships held Castleblayney, County Monaghan the Irish team led by President Tom Coyle won best team at that competition. This new win confirms their pedigree and standing.

The Irish Drug Free Powerlifting Association (IDFPA) was establised in 1997 to promote the sport of Drug Free Powerlifting in Ireland. The IDFPA is comprised of two sections, raw (unequipped) and equipped lifting. The association has a strict drug free policy and lifters are (open to testing both in and out of competition, lifters who fail to take or fail a test outright are subject to a life ban from the organisation. New members are always welcome to the association. If you are interested in more information about drug free powerlifting in Ireland the IDFPA can be found on facebook and online at www.idfpa.net