Doogue disappointed with display despite convincing win over County Champions 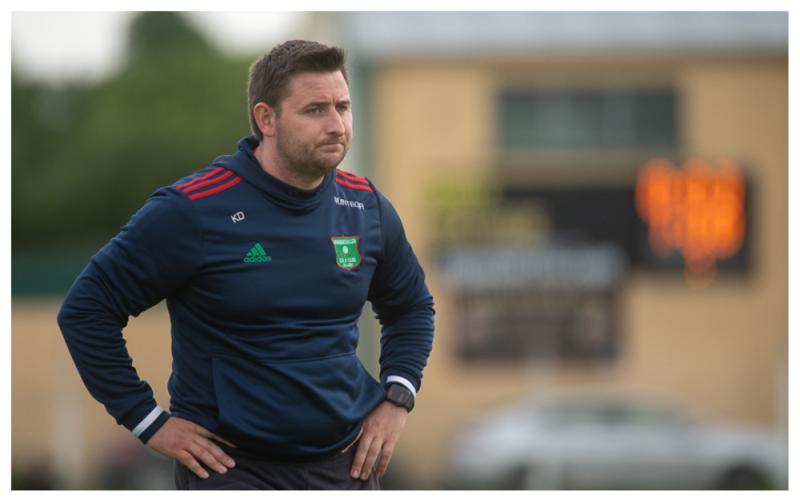 On a blustery evening in McCann Park. The county champions Portarlington played host to rivals Graiguecullen. Graiguecullen were hoping to keep up the momentum from their resounding win over Josephs’s last time out. Portarlington was looking to bounce back from a poor performance last time out in Old Pound where they suffered a nine-point loss.

The first half was all about Graiguecullen, They rushed into an early lead of four points to two thanks to 3 frees from Full forward Conor Kelly and a point from center-forward Lee walker. About fifteen minutes into the match Graiguecullen’s center-back Mark Timmons found himself on the end of a very well-worked move and he fired the ball into the back of the county champions net. Both teams were taking risks on the kick-outs and driving them long into the middle of the field. It was the Graiguecullen Midfielder Aaron Dorgan who benefited greatly from this as he consistently claimed his team’s kick-outs with some outstanding catches. On the rare occasion that the ball would fall loose, Dorgan’s partner in midfield, Danny O Reilly was always on hand to pick up the pieces.

Portarlington had a very disappointing first half and made no real impact on the game. It was a case of a very poor Portarlington performance rather than a good Graiguecullen showing. Eight wides in the first half and only four scores is all that needs to be said. The score at halftime was one goal and nine points to four points in favour of the away side.

The second half was a lackluster display from both sides. There were definitely fewer handling errors than in the first. However, that was largely down to the fact that Portarlington had resigned themselves to defeat and sat back for most of the second half and Graiguecullen was happy to pass the ball around. The one bright spot for Portarlington throughout for the second game in a row was Rioghan Murphy. He continuously won back possession, was always the main man commencing the
attacking plays, and contributed four of Portarlingtons eight scores albeit three of which were from frees. Graiguecullen’s Conor Kelly kept plugging at the frees and ended up with an impressive tally of nine points on the night. The most impressive score of the night came from wing forward Aaron Forbes who slotted one over the bar with ease from quite a distance.

Portarlington will play their last game of the winner's round-robin section of the league against St Josephs, While Graiguecullen who now have a place in the final has Dempsey's up next.

Even though the game will not be a telling point on how the season will go for either team, both sides will be looking to improve with only four weeks to go till the championship. Things look particularly ominous for the county champions who have now lost two on the bounce. They never looked like leaving a mark on either game. Even taking into account that there have players missing at the moment, you would assume that the county champions would be able at least make some sort of an impact in the closing stages of the league. With the championship only around the corner, it appears the county champions have a lot of work to do if they are going to retain their title.

After the Game Graiguecullen Manager Kevin Doogue told the Leinster Express that he was despite the convincing win, he was disappointed with his team’s performance.

“It was like two junior teams out there this evening at times, Very poor football, 9 out of ten we were taking the wrong option, particularly in the first half, The second half Port dropped further back, we thought they might come out and have a proper go. It wasn’t great now. But look it, that’s eight wins in a row for us and winning becomes a habit too. There is a few lads injured but I still don’t think there’s any excuse for the poor decision-making from our lads at times there today”