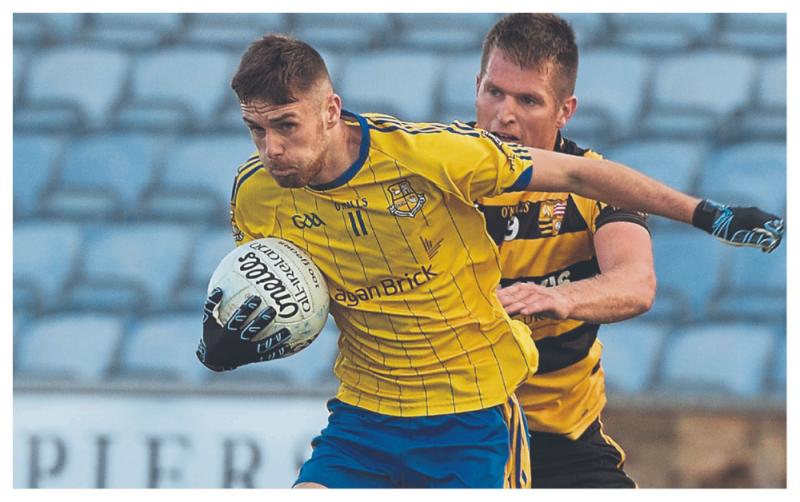 There was a healthy, energetic crowd at Tony Byrne Park on Friday evening for the winner-take-all clash between St. Joseph’s and Portarlington. Events elsewhere had removed O’Dempsey’s from contention, meaning the winner of this one would find themselves in the final. Portarlington was happy to sit off St. Joseph’s in the early stages, but giving the hosts so
much time on the ball allowed the men in yellow to take an early three-point lead. Portarlington didn’t learn their lesson and was lucky to survive a scare in the eleventh minute when St. Joseph’s’ left corner-forward, Óisín Hooney had a goal chalked off; square ball the decision. Hooney showed great pace and skill throughout the game and was one of the few bright sparks on show. Portarlington made four personnel changes from the team that lost to Graiguecullen a week previous, but the same problems persisted.

Slow out of the blocks, passive defenders, and defeated body language were all good indicators that making the final was no high priority for the men in maroon and green. The highlight of Portarlington’s first half came on the 20-minute mark, when right half-forward, Adam Ryan, scored a beautiful point that really deserved a goal. Ryan was the best
player on the pitch for the visitors, as the usually talismanic Rioghan Murphy had a particularly quiet evening. There was an ugly moment in the 22 nd minute, when Portarlington’s Eoin McCann suffered a nasty head injury. Play worryingly continued for quite some time with the player on the ground, and wasn’t stopped by the referee until McCann stood up and immediately stumbled back to the ground. It was to be the end of the night for McCann as he was carefully helped off the field by his physio. St. Joseph’s right corner-forward, Matty Campion, wearing 17 for the night, had a good first half, playing with intensity and perseverance. He slotted over a free-kick right on the stroke of half-time to send the hosts in at the break leading 0-7 to 0-3.

The quality did not improve in the second half, as both teams were loose both in and out of possession. St. Joseph’s sent on a flurry of substitutions to try to inject some pace, but it was the starters that instead picked up their collective games, perhaps worried about being called ashore themselves. Eoghan O’Flaherty with the score of the game on 45 minutes, dissecting the posts off a wonderful training-ground set-piece. There was a brutal collision mid-way through the second half with both sides’ physios quick to interject. Portarlington’s Padraig Coffey was able to play on, but Matty Campion of St. Joseph’s was not as lucky. Cormac Murphy ran the show for the final 20 minutes, helping St. Joseph’s close out the game. Portarlington left a lot of points out on the field, repeatedly dropping shots just shy of the crossbar, into the grateful hands of St. Joseph’s goalkeeper, Aaron Cooney. Both sides were wasteful in attack, ill-disciplined in defence, and inaccurate with the ball, making for a
very sloppy encounter.