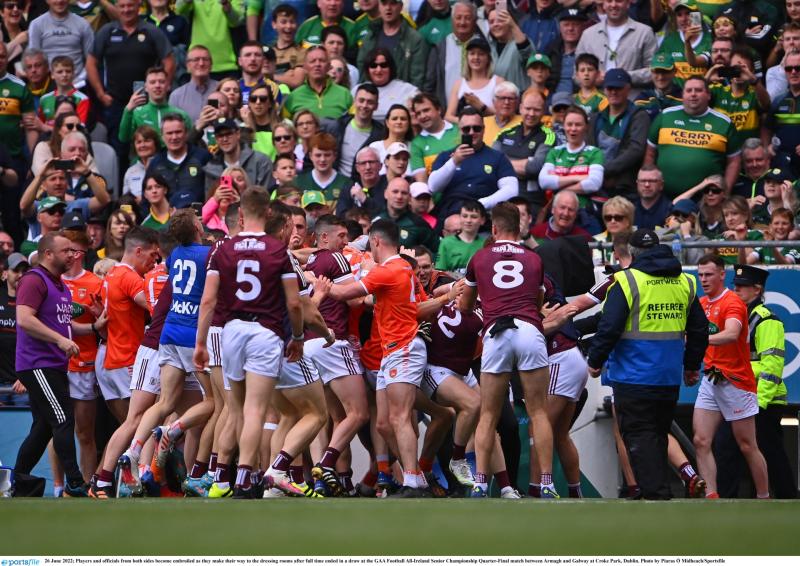 Former GAA president and Laois man Liam O'Neill wants the organisation to "tidy up its act" in the wake of the brawl during the Galway Armagh game in Croke Park and believes the Laois GAA dressing room system could work.

The Trumera Club man was interviewed on RTÉ Radio 1’s Morning Ireland. He said there should be limits on the number of people on the side line during matches and that only management and on-field players should be allowed into the dressing rooms.

He also says the dress room system used at MW O'Moore Park in Portlaoise could be adopted.

"We had an absolutely fantastic game in Croke Park, everything you want in Gaelic Games, yet we’re talking about violence and that is a huge pity," said O’Neill, who served as GAA president between 2012 and 2015.

"In my time as president I made a huge effort to clear the sidelines down to one manager and one runner. That’s more than enough. We really have to get to grips with this situation.

"We had a situation in Croke Park on Sunday where we had excellent dressing rooms on both sides of the field. We could have used one for either team and avoided this.

"People say it’s the same around the country. It’s not. In Portlaoise we have two dressing rooms and the players come out of either end of the same stand. There’s never a difficulty. Admittedly it was a response to a situation that developed but we solved it and Croke Park really have to get to grips with this.

"There is no need for the extended panels to go into the dressing rooms at half-time. What do they contribute in there anyway? We should have people sitting in the stands and have the managers and selectors in the dressing rooms with their players.

"It’d be much tidier and we wouldn’t have had the situation we had on Sunday," he said.

O’Neill said there is a decreasing faith in the GAA’s disciplinary system.

"That has to be admitted, that we have to tidy up our act," he said.

"We should move to a situation where penalties are imposed on the day. We had that at one stage where the black card lasted for an entire game, that meant people weren’t doing the sort of things they’re doing now. We have to get back to that.

"We can’t legislate for everything that happens but the responsibility for sports administrators is how we handle those situations when they develop.

"It’s up to us to address what happened on Sunday and make sure it simply doesn’t happen again."