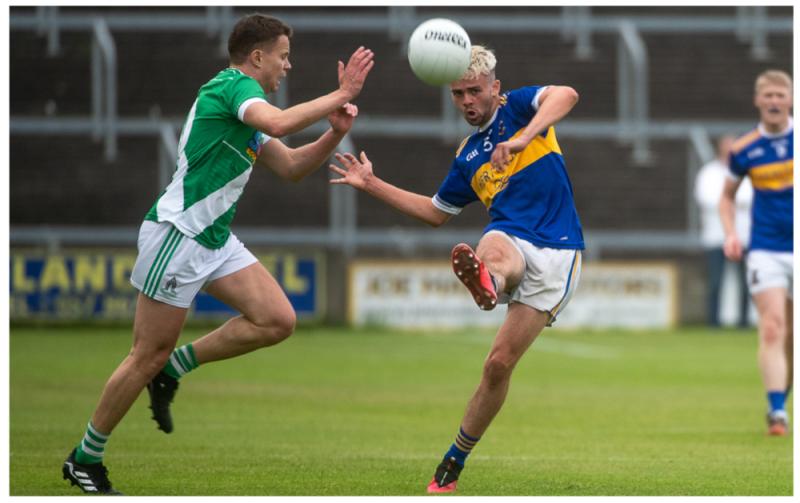 The beaten finalists of the Senior football championship in 2018 and 2019 met in the opening round of this year’s competition on Thursday. O’Dempsey’s and Killeshin last met in the 2020 championship, where an injury-time goal from Matthew ‘Hatch’ Finlay helped the Killenard men edge it.

This one was expected to be a tight affair, but it proved anything but. O’Dempsey’s played some exceptional football on the evening, as first-half goals from Michael and Matthew Finlay helped them on their way to a convincing victory.

O’Dempsey’s were the faster out of the blocks in this opener, as they kicked the first two scores. Full-forward Eoin Finlay got them off the mark with a fine score from play before Matthew Finlay doubled O’Dempsey’s advantage from a placed ball.

Killeshin got on the scoresheet in O’Moore Park through veteran Cathal Brennan, as some powerful running through the centre from Eoin Lowry resulted in the score. O’Dempsey’s responded with another Matthew Finlay point from a free, and then the Killenard men got the opening goal.

Daithi Howlin spotted the run inside of Michael Finlay and played a nice handpass through to him. Finlay only had one thing on his mind, as he buried one into the bottom right of the goals.

Barry Kelly added another point for O’Dempsey’s, as they were playing full of confidence at this stage. Killeshin replied with two scores through Adam Deering and Cathal Brennan (mark), but O’Dempsey’s continued to dominate proceedings.

O’Dempsey’s wing-forward Daithi Howlin was terrific in setting up scores and kicking them. Howlin landed two excellent scores with his right foot, while Eoin Finlay grabbed another from a mark.

Killeshin hit back with points from Cathal Brennan and Evan Lowry, but the Finlay brothers were proving unmarkable down the opposite end. Eoin Finlay set up Matthew Finlay for an easy score, and while Luke Attride grabbed a point back for Killeshin, O’Dempsey’s fired in goal number two shortly after.

Nice inter-changing handpasses from Michael Finlay, Brian Nugent, and Shane Nerney saw Matthew Finlay go through on goal, and ‘Hatch’ crashed one into the roof of the net.

O’Dempsey’s kicked the last two scores of the second half, with Matthew Finlay (free) and Sam Molloy helping them to a comfortable 2-10 to 0-6 lead at half-time. The margin of lead was well deserved as well, as Eoin Kearns’ charges had played some beautiful football.

Killeshin, who had won the Division 1B league final over Stradbally only a couple of weeks previous, could not live with O’Dempsey’s pace and directness in that first half. They also kicked five wides as well, as this contest looked done and dusted already.

Killeshin grabbed the opening score of the second half through a Cathal Brennan free. O’Dempsey’s hit back with the next five points though to seal the result.

Midfielder Barry Howlin fired over two points, while his brother Daithi Howlin also kicked a score. Matthew Finlay slotted over two frees, and then O’Dempsey’s got their third goal.

Maurice Deegan awarded O’Dempsey’s a penalty after Daithi Howlin was pushed down in the square. Eoin Finlay stepped up to take the spot-kick, and while his first effort was saved by Killian Roche in the Killeshin net, Finlay fired in the rebound.

The match petered out after that, as both teams recognised the game was effectively over. Luke Attride and Michael Finlay exchanged points before Killeshin rattled off two without reply.

Substitutes Kaelum Hand and Paddy Walsh had an immediate impact, as good work from Hand helped set up Walsh who popped over from close range. Eoin Lowry knocked over another point from a free, but O’Dempsey’s responded with the next two points through Matthew Finlay's frees.

Eoin Lowry grabbed another score from a placed ball, but O’Dempsey finished off the match in style. Corner-back Johnny Kelly strutted up the field and played a cute ball into Eoin Finlay, and Finlay crashed home from inside the square.