The journey so far back to the big time 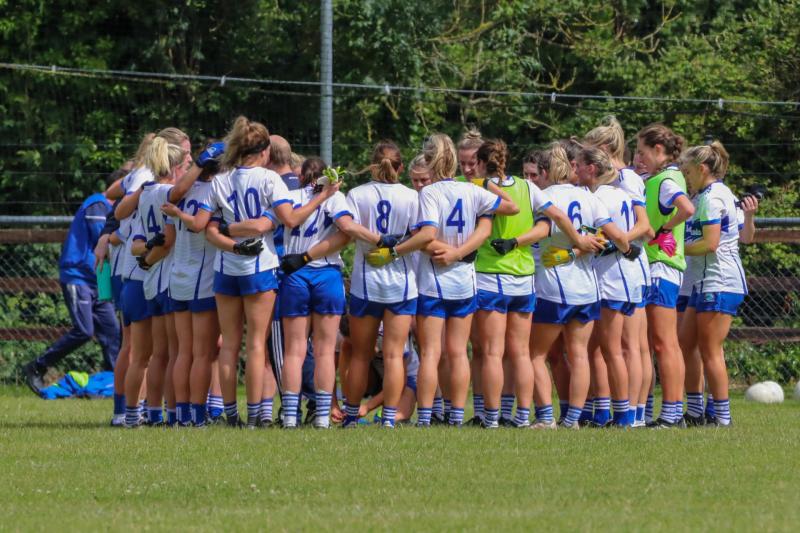 The Laois Ladies Gaelic football team has enjoyed an incredible season to date this year and are on the verge of All Ireland glory.

Donie Brennan’s charges have built on a decent 2021 season to go a step further in 2022 and reach an All-Ireland final on Sunday, August 31 in GAA HQ Croke Park. Here we rewind through their remarkable championship campaign thus far.

Leinster Intermediate Championship Round 1
The Laois Ladies opened their Leinster campaign with a trip to Dundalk to face Louth in April. It proved to be a low-scoring and tight affair, as Donie Brennan’s side was forced to dig deep on the day to secure victory. Conditions were not ideal for this game of football, and an early goal from Louth really asked questions of Laois’ character.

Eva Galvin grabbed a goal back for Laois though, as they led by four points at half-time. While Jane Moore’s black card in the second half hindered Laois, Mo Nerney stood tall to fire in a crucial goal to make sure they got off to a winning start.

Leinster Intermediate Championship Round 2
Following on from their opening group win, the Laois Ladies played their second group match against neighbours Offaly in O’Moore Park. This turned out to be one of the most exciting games of the season, with both sides playing free-flowing attacking football throughout. Laura Marie Maher got the home team off to a flier with a couple of early goals, but Offaly battled back to take a two-point lead at half-time.

Laois were wasteful with their shot selection in the second half, but an Emma Lawlor point in injury-time helped them narrowly grab the win in Portlaoise. MORE BELOW PICTURE. 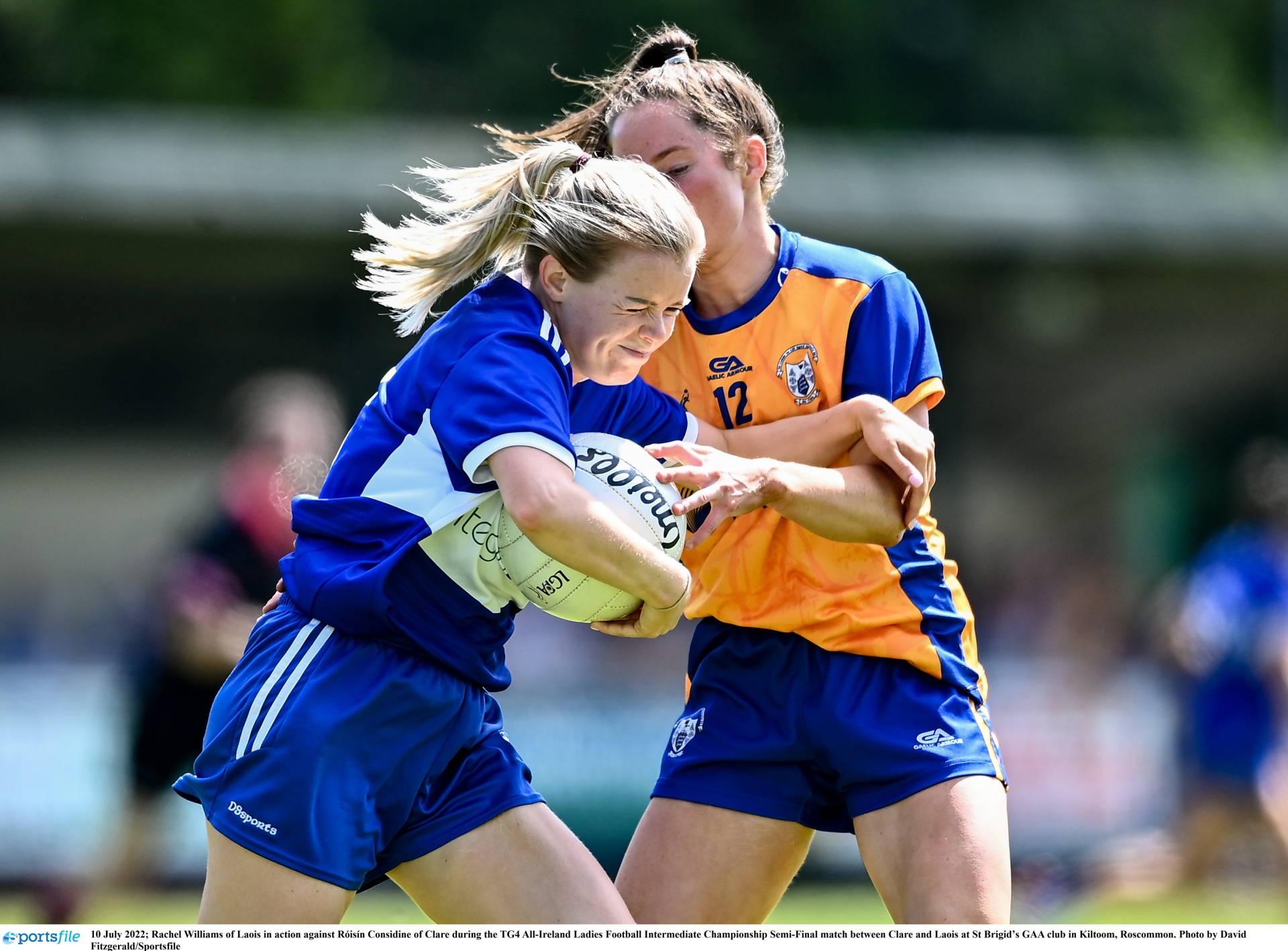 Leinster Intermediate Championship Round 3
Ratheniska was the venue for the Laois Lady’s final group game, with Wicklow the opposition this time around. While the first two matches against Louth and Offaly were tight and hard-fought games for Donie Brennan’s side, this clash was a lot plainer sailing.

Laois scored 2-6 in the opening portion of the game to leave Wicklow chasing shadows, with Erone Fitzpatrick and Alanna Havill grabbing the early goals. Further goals from Emma Lawlor, Anna Moore and Kelly O’Neill helped Laois to a 14 points victory to ensure they finished top of the group to advance.

Leinster Intermediate Championship Semi-Final
Wexford was all that stood in the way of the Laois Ladies reaching the Leinster Intermediate Championship final. Things looked to be going smoothly for the Laois side, as they played some outstanding football in the first half. First-half goals from Laura Marie Maher, Eva Galvin, Mo Nerney and Ellen Healy helped Laois to a 4-7 to 2-5 advantage at half-time.

However, they only managed three points throughout the entire second half, as Wexford pegged them back to force extra-time. Wexford took control of the encounter in extra time once more, as Laois were left heartbroken after over eighty minutes of football. MORE BELOW PICTURE. 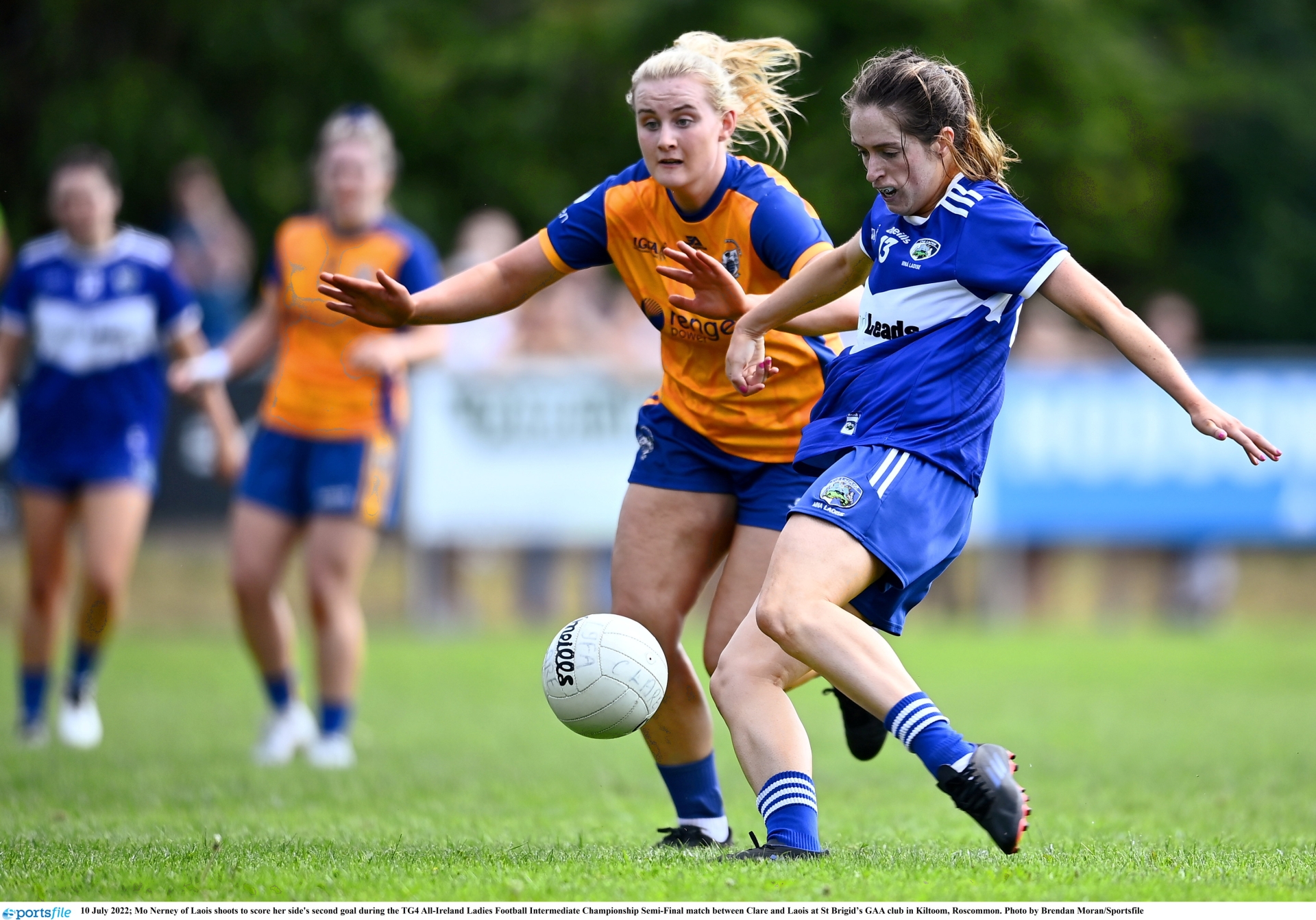 All-Ireland Intermediate Championship Round 1
The Laois Ladies brushed themselves off after their disappointing Leinster semi-final defeat to take on Sligo in the opening round of the All-Ireland series. They took out their anger on Sligo on the day, as Laois romped to a staggering 33 points victory.

They scored 6-23 on the afternoon, with the goals coming from Mo Nerney, Eva Galvin, and a brace each from former Scoil Chriost Ri duo Erone Fitzpatrick and Emma Lawlor. Laois were in a three-team group with Sligo and Tyrone, so this was an ideal opener for Donie Brennan’s team.

All-Ireland Intermediate Championship Round 2
Next up in this group was Tyrone, who was relegated from the Senior ranks last season. The Ulster side were the favourites to win this Intermediate competition and gain promotion back to Senior, but this Laois outfit had other plans. They put in their finest performance of the season to date, as a first-half goal from Sarah Anne Fitzgerald helped Laois to a narrow 1-9 to 2-5 lead at half-time.

Shifra Havill grabbed a goal early in the second half, and the third goal from Erone Fitzpatrick gave Laois a comfortable enough lead that they would not relinquish. MORE BELOW PICTURE. 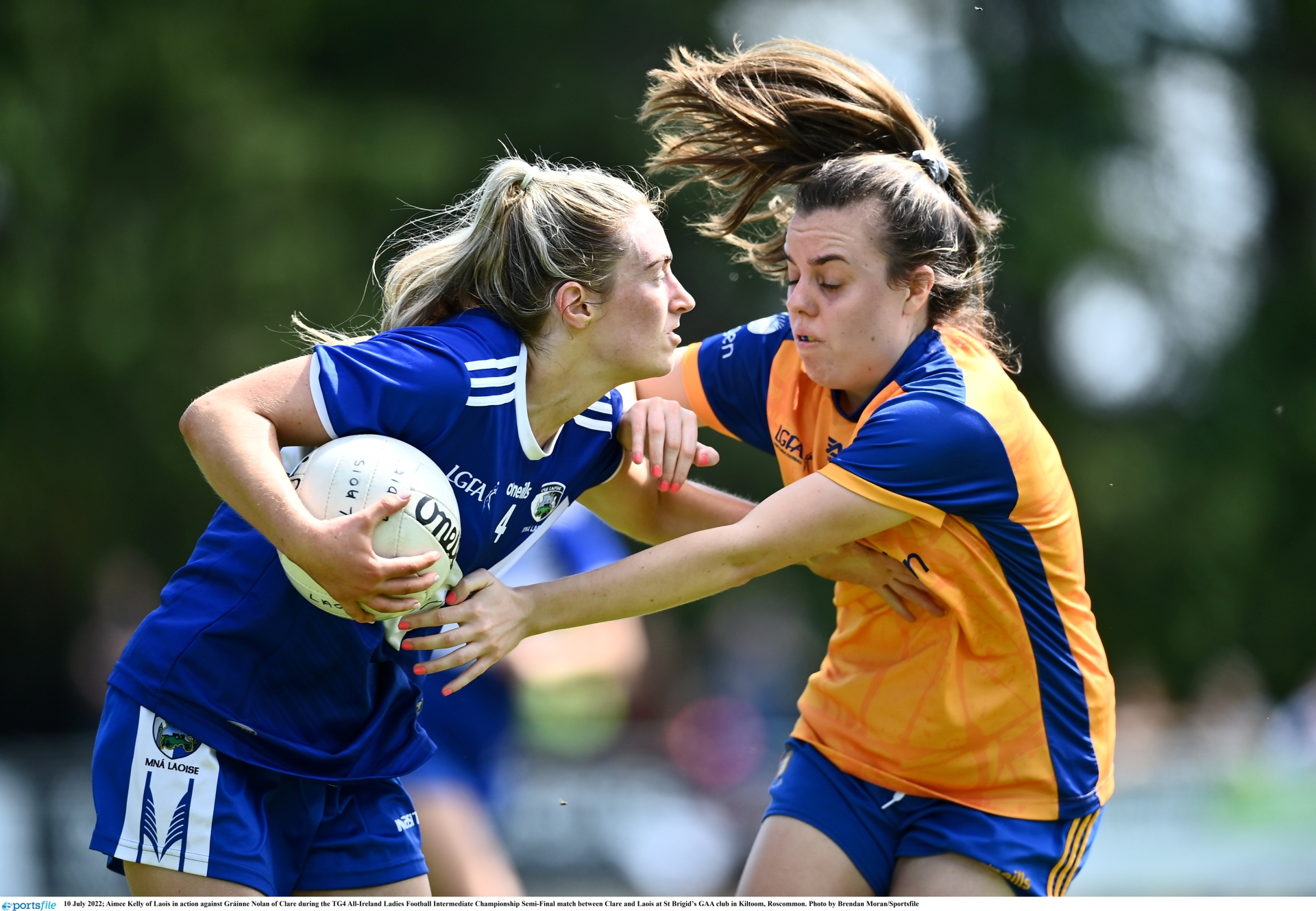 All-Ireland Intermediate Championship Quarter-Final
Wicklow was seeking revenge in this All-Ireland last eight match-ups with Laois after their earlier loss to the O’Moore County in the group stages of the Leinster championship. However, Laois proved too strong for Wicklow once again, as Donie Brennan’s charges fired 6-16 en route to booking a spot in the last four of the All-Ireland series.

Four first-half goals from Erone Fitzpatrick, Sarah Anne Fitzgerlad, Emma Lawlor and Shifra Havill all but ensured Laois of this result. Mo Nerney scored a brace of goals in the second half, as Laois looked to be in flying form heading into the semi-finals. MORE BELOW PICTURE. 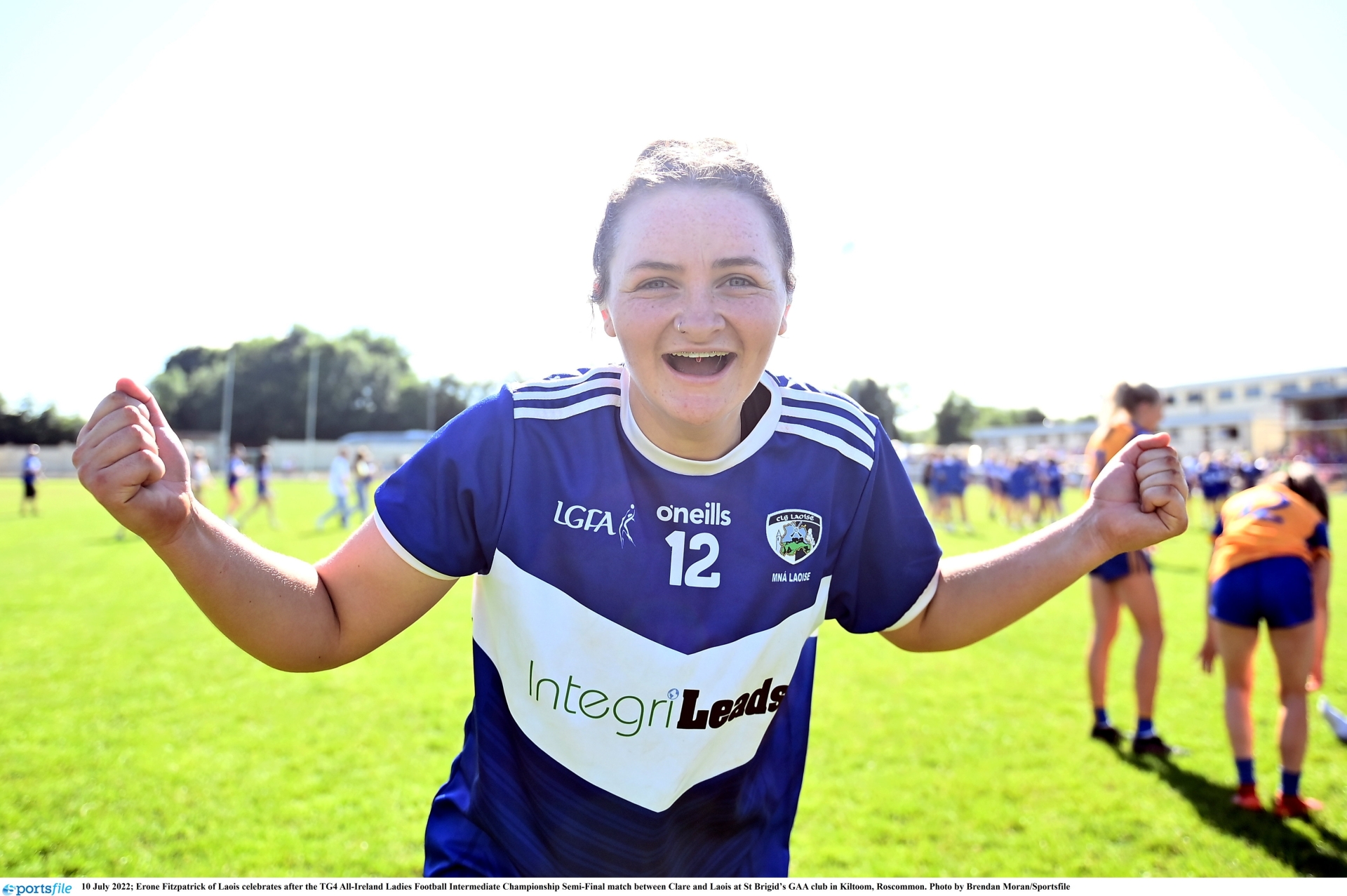 All-Ireland Intermediate Championship Semi-Final
It took a titanic effort, but Laois managed to edge past Munster side Clare to book their place in the All-Ireland Intermediate final in Croke Park. In sweltering hot conditions in Kiltoom, Co. Roscommon, Laois and Clare played out a thrilling first half. Laois had a mixture of their goalkeeper and good fortune to thank for in that first half, as Eimear Barry pulled off some amazing saves, while Clare was denied by the posts on numerous occasions.

An Eva Galvin goal meant Laois were on level terms at half-time. A goal early in the second half from Mo Nerney put Laois in the driving seat, but Clare pegged them back to force extra time.

Clare started the added time on the front foot, but Laois rebounded again and superstar, Mo Nerney, finished with a tally of 1-14 to help them book their place in Croker.