Continuing on with our coverage of the Laois Ladies as they bid to win the All Ireland Intermediate title on Sunday. We spoke to the captains of both of Wexford and Laois. 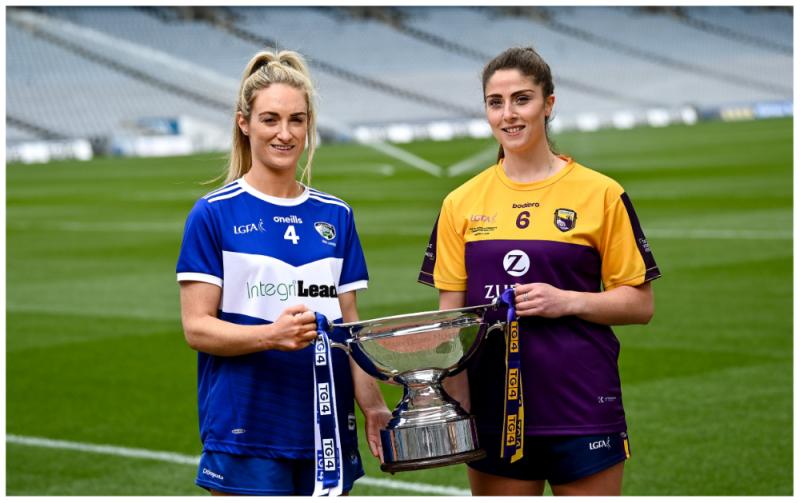 Before she got to the LGFA event, Aimee Kelly spoke to us at the Laois ladies open training session last Thursday where a massive crowd of supporters gathered to support the ladies. Aimee told us of her delight to see such a great turnout especially the younger fans.

"Yeah look its brilliant, brilliant to see so many young kids here. We are delighted to be role models for these kids. For young girls to see us playing in Croke Park it hopefully inspires them like the 2001 team inspired us. To see such support give us a great boost going into the match next week," she said.

Laois had a tough game last time out against Clare, it was much tighter affair than the previous games in the all Ireland series. Aimee spoke about how it could be beneficial to Laois that they came out on the winning side of such a hard fought battle.

"From our perspective it was great to get such a good game against Clare, they really pushed us to the last. They were a really physical team. I think it showed great character from ourselves that we were able to come from behind in extra time so hopefully it will stand to us," she said.

Aimee spoke about how the team is feeling confident ahead of Sunday.

"Yeah look it we are definitely confident, Its always a tight match between the two of us. The last time we got bet in extra time, that stood to us in the game against Clare. We will just be focusing on ourselves and hopefully we come out the stronger team on the day," she said.

LGFA held a media open day and we sat down with opposition captain Rosin Murphy. Roisin feels that the experience in last years final will stand to Wexford.

"Last years final was a bad day for ourselves. we just didn't perform at all on the day, for us we have an opportunity to rectify that on Sunday," he said.

Aisling then spoke about he experience playing in Croke Park in the past.

"I suppose playing in Croke park at an intermediate or junior level, your not really used to it. Its not just about the match there's a lot of it around the occasion itself," she said.

Finally, Aisling talked about the challenge that Laois will pose to them.

"Laois are a fantastic team, good balance to them and a great set of forwards. Anytime we have played them over the last couple of years the games have been so tight. A couple of them have gone to extra time. we expect nothing less then an absolute battle. Both sides love to score so hopefully it'll be a nice open game and free flowing football as well," she said.