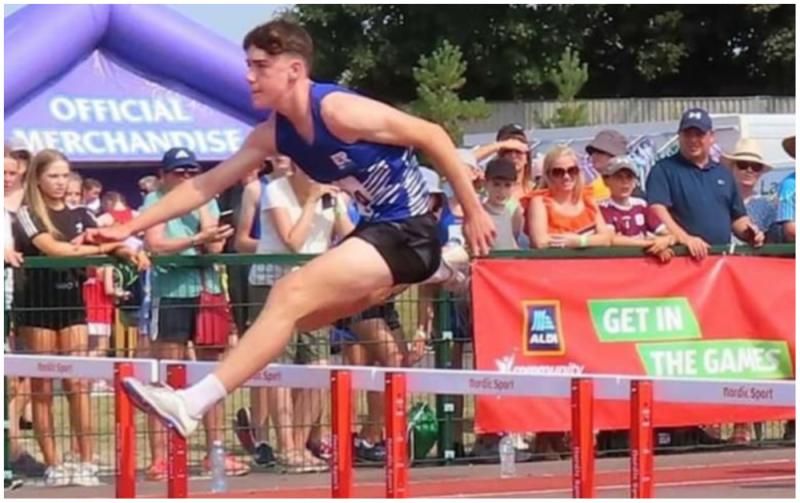 To win a National Title in any sport is a great achievement. To win two is exceptional. To win three is the dream of champions. To win four is almost unheard of. Yet, thirteen-year-old Emo Rath athlete Cillin Hoey did just that, when on Saturday 13th August he won the National Community Games under 14 80m hurdles. Cillin didn’t just win the race, he led from start to finish and was several metres clear of the chasing athletes, which is normally unheard of in the shorter sprint hurdles.  Cillin’s year started off with a win in the 60m indoor hurdles. He followed this up with a win in the 75m outdoor hurdles in June. He then competed in the National Combined Events (Pentathlon). He won three of the five events in this competition and showed that he is a talented middle-distance runner, winning the 800M convincingly.

Cillin then turned his attention to the Community Games sprint hurdles. This event is 5m longer than the Athletics Ireland event. This may seem like it’s of no consequence, but the approach run to the first hurdle and the spacing between hurdles is completely different. Such is Cillin’s talent in the sprint hurdles that he very quickly adjusted to the different spacings, winning the Regional title firstly and then on Saturday 13th he won his heat, to gain a premium middle lane for the final. He was very quick off the start and first out over the first hurdle and opened a bigger gap over each hurdle to win in convincing style.

Cillin is now on a short active rest before knuckling down into pre-season training. He moves into secondary school this autumn and with Schools combined events coming up later this year, there may even be an unthinkable fifth National Title for the young Emo Rath athlete before year end.